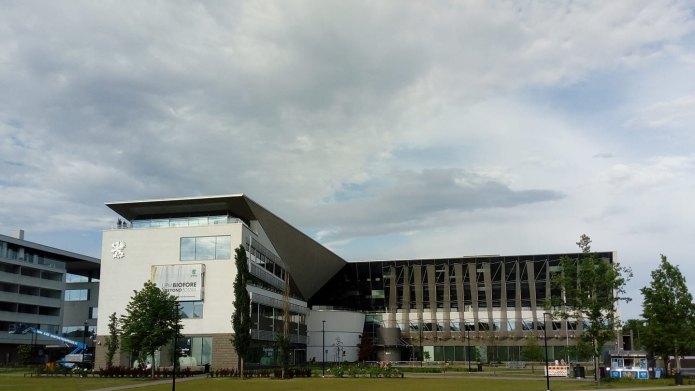 UPM-Kymmene is a Finnish company which operates in the sectors of pulp and paper, timber and energy. It was created in 1996 from the merger of Kymmene with Repola Ltd and its subsidiary United Paper Mills. It subsequently expanded its operations to China and Uruguay, among others. It now owns four pulp mills with a total pulp capacity of 3.7 million tonnes. Three of these mills are located in Finland, one in Uruguay (Botnia). In China the company owns the Changsu paper mill. UPM has paper mills in Austria, Estonia, Finland, France, Germany, UK, Russia, Uruguay and in the USA. UPM also owns 574,000 hectares of certified forest in Finland, 76,030 ha of forest land Minnesota USA as well as 255,000 hectares of plantation forests in Uruguay. It further sources wood from 12 other countries. The company has done a major rebranding effort to transform from paper and pulp to the “bioeconomy” by renaming its business sector of pulp and forestry as biorefinery and by adapting the slogan “The Biofore Company”.

In 2017 UPM announced its plans to build a new large pulp mill in Uruguay. These plans are a cause for concern due to the impacts that the additional plantations will have, the impacts of the effluents that will be discharged in the relatively small Rio Negro and the social impacts, including strengthening the rural exodus. UPM signed a controversial agreement with the government of Uruguay which action groups have challenged as being unconstitutional, due to the high investment commitments made by the government, without any approval by congress.

UPM has been involved in several controversies and conflicts:

The Fray Bentos (ex-Botnia) pulp mill in Uruguay was the target of massive protests and caused a diplomatic dispute between Uruguay and Argentina. This mill was inaugurated in 2007, under massive protests from residents and environmental groups and faced huge opposition from the Government of Argentina, which lead to the escalation of a bilateral conflict between two otherwise friendly neighbours. Local residents feared for the pollution of their drinking water and Argentina complained about the pollution of one of its prime tourist beaches, located just opposite the mill. Botnia failed to consult or address the concerns of local stakeholders and affected communities. It downplayed the impacts of the pollution. In 2009 UPM bought the operations from Metso-Botnia in Uruguay, including the Fray Bentos mill.

Until 2009, UPM’s Changsu paper mill in China was supplied with pulp from APRIL in Indonesia. But following widespread criticism of the Indonesian pulp industry, UPM announced that it would stop sourcing pulp from APRIL and instead source from its Fray Bentos pulp mill in Uruguay.

In 2017 UPM signed an agreement with the Republic of Uruguay for the construction of a new pulp mill in Paso de los Toros. In the agreement, Uruguay commits to a series of serious legislative changes and investments worth between USD one and 1.8 billion, without any commitment from UPM’s side, apart from deciding in 2020 if it will invest in a new pulp mill in Paso de los Toros. Critics have pointed out that the agreement is not beneficial for the people of Uruguay, that it was signed before an Environmental Impact Assessment was made, and that it is not legal, as it was not approved by congress. UPM will decide in 2020 if it will proceed with its plans. The EIA for this project does not cover the impact of the plantations that will be required to feed the mill. There are also strong concerns about the pollution of the relatively small Rio Negro with the effluents of the mill. Other problems include water shortage, impact of migrant workers, health impacts, among others. For more details see the Paso de los Toros Dodgy Deal pofile.

Labour rights The MoU that UPM signed in 2017 with the government intends to limit the power of unions and the right of workers to strike. A report by WRM from 2008 stresses the importance of unions, as it found that working conditions in the pulp sector had improved since 2005, when a new government came into power which allowed workers to form unions.

No Environmental Impact Assessment for plantations Neither the EIA for the Botnia mill nor that for the Paso de los Toros mill address the impacts caused by the plantations.

Conversion of natural grasslands into plantations UPM’s plantations in Uruguay are mostly established on natural grasslands. Though this does not lead to deforestation, which is a common problem in the sector, it does cause the conversion of a natural habitat into monoculture plantations, which impact the biodiversity of the ecosystem. One of the problems associated with the plantations in Uruguay is an increase in wild boars, foxes and venomous snakes. For sheep farmers this is a serious problem. The snakes have also killed pigs, calves, cows and even horses.

Logging of high-conservation value forests in Finland Though UPM has received recognition by the Carbon Disclosure Project for its efforts of deforestation-free supply chain, the company has been involved in the logging of high-conservation value forests in Finland, contributing to the deep crisis of Finland’s forests, according to Greenpeace. Several endangered habitats are located within UPMs forests, which are at risk of being logged. For example, in 2016 UPM was criticised for logging on the island of Ärjänsaari, located in a Natura 2000 area with repeated demonstrations against the logging, in 2015 for logging in Haariko between two protected areas which provide critical habitat for endangered species.

Since 2014, the group Vecinos de Guichón por los Bienes Naturales (Residents of Guichón for Natural Assets) has been publicly denouncing its concern about discharges from UPM's Vivero Santana, including the death of fish in the Santana stream in Paysandú. The response was always to say that the complaints lacked technical support, accompanied by denials from the company in the same direction. Recently in the UPM nursery, the presence of Metolachlor and Glyphosate (herbicides), arsenic and iron was confirmed and, additionally, Imidacloprid and Ampa in samples from the drainage towards the Santana stream ravine. These results were given to the Vecinos de Guichón group, the UPM nursery and the National Directorate for Quality and Environmental Assessment of the Ministry of the Environment.

“Today we can ensure that UPM pollutes the Santana stream. The damage caused by UPM in the biodiversity of the area is evident since where it discharges its effluents there are no fish left, turtles, birds and otters have disappeared”, expressed the group of residents of Guichón, who demanded urgent action from the Ministry of the Environment in a note delivered in person to Undersecretary Gerardo Amarilla.

Despite acknowledging that UPM violated the law on effluent discharge, the Ministry of the Environment says that the company is "liable of sanction" and only orders it to adopt corrective measures. Read more

Between 2011 and 2017 UPM-Kymmene was funded through corporate loans and underwriting totalling USD 576 million. See below for a specified overview of the financial institutions involved.

In March 2020 a syndicate of fifteen banks financed a EUR 750 million credit facility, maturing in March 2025, for UPM-Kymmene (UPM-Kymmene press release). See below for more details.

In November 2020, UPM-Kymmene applied for the listing of its first ever green bond of EUR 750 million (UPM press release), followed by issuing a EUR 500 million green bond on 15 March 2021 (UPM press release). Both listings are part of UPM's Euro Medium Term Note (EMTN) programme and its Green Finance Framework, which could add up to EUR 3 billion in the future.

There are no projects active for UPM-Kymmene now.
on record

Strikes shut down UPM pulp and paper plants in Finland

Renegotiation no, culmination of surrender from Uruguay to UPM

Report to UN CESCR on UPM investment in Uruguay

Papering Over Reality and Risk in Uruguay

Who is UPMs largest shareholder and what does he think?