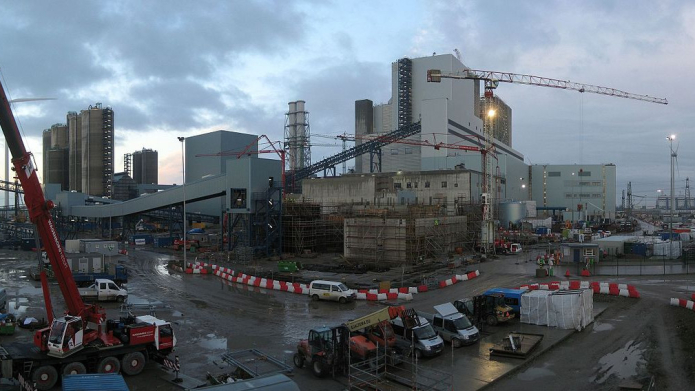 RWE's Eemshaven coal power plant in the north in the Netherlands, expected to be conversed to run on biomass. Photo: Wutsje via Wikimedia Commons (CC BY SA 3.0)

The Eemshaven Power Station is co-firing 0.8 million tonnes of pellets a year (equivalent to 15 percent of its coal capacity), and it has been granted a permit to double this amount to 1.6 million tonnes annually.

The Dutch environmental organisation Mobilisation for the Environment (MOB) has appealed against the environmental permits granted for increased co-firing of wood in the Amer and Eemshaven Power Stations. The appeals are based on a court ruling of May 2019 which obliges the Dutch government to take strong measures to reduce nitrogen emissions and not to allow any new such emissions until nitrogen levels overall have been decreased. In their appeals, MOB has demanded the closure of both power station. The Appeal against the Amercentrale permit was heard in September 2020; a decision remains outstanding. The Appeal against the Eemshaven permit will be heard in January 2021.

All of the pellets burned in Dutch coal power stations of RWE are imported. RWE refuses to disclose where its pellets are sourced from. What is known from two of their suppliers is that the company has supply agreements with the world's three biggest pellet producers: Enviva (US), Graanul Invest (Baltic States, with plans to expand into the US), and Pinnacle Pellets (British Columbia, Canada). Reports from NGOs have shown that Enviva and Graanul Invest routinely source whole logs from clearcut biodiverse forests (See Dogwood Alliance report, Biofuelwatch report). A report by the Canadian NGO Stand.earth shows that Pinnacle Pellets also sources whole trees in a region where intact biodiverse forests, including caribou habitat, are being clear-cut on a large scale. Pellet trade statistics show that the Netherlands is importing pellets from other countries, including Russia, and that RWE's lack of transparency is concerning.

RWE has started transforming its two coal power plants in the Netherlands to plants that run on biomass. However, burning woody biomass emits more CO2 per unit of energy generated than coal, and the demand for wood pellets is accelerating the destruction of wildfire-rich forests.

Banks should avoid financing RWE’s biomass cofiring and conversion projects. Further, RWE should be excluded from all financial services based on its record on coal alone. The company’s conversion of coal-fired power plants to wood-pellet-burning power plants does not produce climate benefits and is linked to unsustainable deforestation. This provides additional grounds for banks to exclude all financial services to RWE, and to terminate existing corporate loans and bonds.

Impacts from air pollution: Production of wood pellets for biomass is associated with air pollution and wood dust pollution. Long-term exposure to wood dust is linked to allergic and non-allergic respiratory and nasal disease and with dermatitis as well as two rare cancers. Studies have focussed on occupational exposure, however people living close to pellet plants can be exposed to significant levels of wood dust over long periods. Poor wood dust management has been observed and reported in relation to plants owned by Graanul Invest, communities next to Enviva plants have complained of dust and noise. Pinnacle Pellets has been criticized for failing to control wood dust, and, furthermore, they have had several explosions and fires at plants, resulting in injuries and even deaths of workers.

Climate impacts: Biomass combustion in coal-fired power stations emits even more CO2 upfront than burning coal (per unit of energy), accelerating climate change. Arguments that new trees will reabsorb the carbon emitted by burning wood pellets take no account of the long period of time before new trees mature, and the even longer period of time before forests and forest (including soil) carbon recover from the impacts of logging (presuming climate change and other environmental pressures don’t prevent this from happening altogether). Nor do they take account of the foregone sequestration of carbon by mature forests had they not been logged, nor of the permanent loss of carbon when forests are subsequently replaced with monoculture tree plantations. Hundreds of scientists have pointed out that burning wood from logged trees cannot be compatible with the need to limit global warming to 1.5 degrees.

Forest degradation impacts: The vast majority of the wood pellets are sourced from natural forests, which are being destroyed in the name of sustainability, whereas keeping them standing is crucial to mitigate the impacts of climate change since they are vital carbon sinks.

RWE has supply agreements with the world’s three biggest wood pellet producers, Enviva, Graanul Invest, and Pinnacle Pellets. Enviva routinely sources wood from the clearcutting of highly biodiverse coastal, according to its own website, uses large quantities of hardwood from the Southeastern USA to produce its pellets. Those forests are at the heart of a global biodiversity hotspot, the North American Coastal Plain. US NGOs Dogwood Alliance and Natural Resources Defense Council have been investigating the practices and impacts of Enviva's pellet production since 2014.

Graanul Invest is Europe's biggest pellet producer. It is an Estonian company with pellet plants in all three Baltic States. A report by Estonian Fund for Nature and Latvian Ornithological Society published in December 2020 illustrates how the large demand for wood pellets for exports is increasing pressures on forests in both countries, where the intensity of logging is already at or near record levels. Intensive logging is resulting in serious harm to biodiversity, with the number of forest birds falling by around 50,000 breeding pairs a year in Estonia. High logging volumes are causing forests to sequester less and less carbon, as shown in reports by the countries' governments. The report further shows that a Graanul Invest affiliate has been clearcutting forest even inside a Natura 2000 site, which should be protected under EU law.

Graanul Invest also routinely sources whole logs from forest clearcuts, as confirmed most recently by investigative reporters in late 2020 and, previously, in a report by Biofuelwatch following visits to Estonia in 2018 and 2019 and looked at three Graanul pellet plants and logging practices.

RWE has signed a new sourcing agreement with Envia, doubling pellet purchases from them. The contract with RWE has a tenor of five years and is for the delivery of 90,000 MT during 2022, increasing to 180,000 MTPY for 2023 through 2026.

Report on pellet mills and logging in Estonia

Mobilisation for the Environment