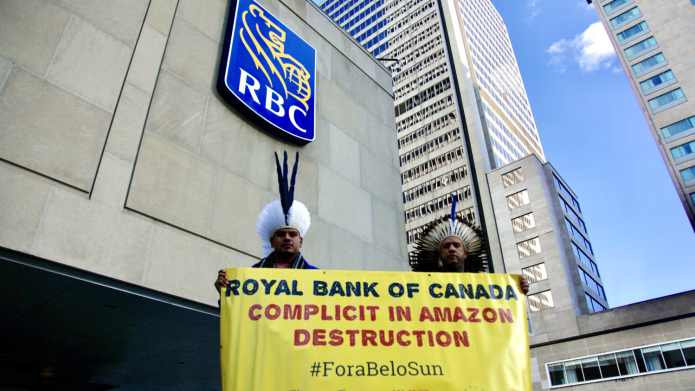 Today, during the COP15 biodiversity summit in Montreal, Brazilian Indigenous leaders and their allies protested outside the Royal Bank of Canada (RBC) to denounce the bank’s financing of the notorious Canadian company Belo Sun, which seeks to carve Brazil’s largest open-pit gold mine in the heart of the Amazon. As COP15 parties work to establish a treaty to address today’s mounting extinction crisis, Canadian mining companies such as Belo Sun pose a massive threat to the Amazon rainforest, home to 10% of the planet’s terrestrial biodiversity.

While Canada’s Belo Sun has yet to initiate operations, its plans to operate a massive mine adjacent to the Amazon’s Xingu River, in a region that hosts critically-endangered endemic species, have been targeted by Brazilian Federal Prosecutors, who have helped to paralyze the company’s licensing process. A potential approval of Belo Sun’s “Volta Grande” project looms, however, threatening to unleash an environmental disaster. Industrial mining is estimated to drive nearly 10% of Amazon deforestation which is quickly approaching a perilous tipping point.

“While Canada hosts a critical summit to determine the future of our planet’s remaining biodiversity, we came to denounce that one of its leading banks is financing a Canadian mining company that threatens untold forest destruction and biodiversity loss, including on Amazonian Indigenous lands. Indigenous peoples are proven the best guardians of Amazonian forests as well as global biodiversity. RBC must heed our call to cease financing Belo Sun and other companies driving the biodiversity crisis.”

“Today’s action outside of the Royal Bank of Canada is meant to shine a spotlight on how the Canadian mining company Belo Sun poses grave, unacceptable, and irreversible risks to Amazonian biodiversity. RBC and other financial actors must sever ties with Belo Sun to not enable the socio-environmental disaster its operations would bring to the people of the Xingu River, with global implications.”