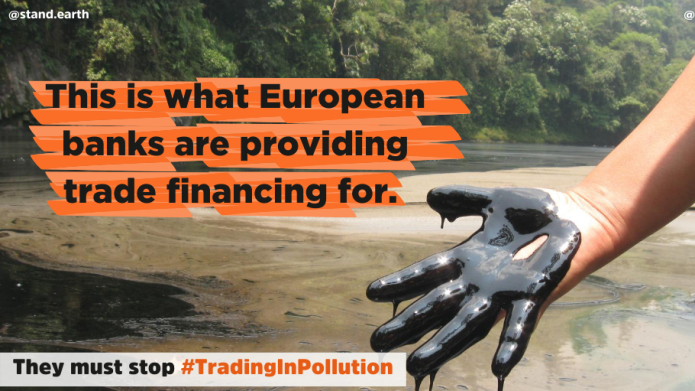 A new report released today by North America-based environmental organizations Stand.earth and Amazon Watch details how European banks are financing the trade of controversial oil from the Amazon Sacred Headwaters region in Ecuador to international destinations in the U.S. such as California. The report also examines how these banks are actively complicit in the impacts of the oil industry on the Amazon rainforest — including oil spills, harm to Indigenous peoples, and climate destruction — despite making previous climate and human rights commitments.

The release of the report comes just a week after the Indigenous Federation of United Communities of the Ecuadorian Amazon (FCUNAE), which represents the communities affected by a major oil spill in April — presented a series of lawsuits requesting precautionary measures to protect communities that are in danger from another possible oil spill due to regressive erosion of the Coca River and to guarantee rights protected by the constitution.  A coalition of Indigenous and human rights organizations also recently launched an emergency global campaign demanding a moratorium on current crude oil production due to recorded contamination and the risk of future spills.

The top banks detailed in the report are ING Belgium, Credit Suisse, UBS, and BNP Paribas (Suisse) SA in Geneva, Switzerland; Natixis in Paris, France; and Rabobank in Utrecht, Netherlands. A total of 19 banks were assessed.

Since 2009, these banks and other private financial institutions have provided trade financing for approximately 155 million barrels of oil from Ecuador to refineries in the U.S. for a total of USD 10 billion. More than 40 percent of those exports go to refineries in California alone. This oil contained approximately 66 million metric tons of CO2, equivalent to the annual emissions from 17 coal-fired power plants.

Nearly all of the banks cited in the report have sustainability pledges or commitments to uphold Indigenous rights, as signatories of either the Equator Principles and/or the United Nations Environment Program Finance Initiative’s Principles for Responsible Banking. Several banks have policies specific to the Arctic, including Credit Suisse’s new sustainability initiative designed to “enhance consideration of biodiversity.” Yet the financing of the Amazon oil trade violates the spirit of those commitments.

“The financing from these banks perpetuates human rights abuses, worsens the climate crisis, and further tethers Ecuador’s economy to the boom-and-bust cycles of natural resource extraction. Given the recent oil spill and calls from Indigenous federations in Ecuador for a moratorium on oil extraction, any bank committed to protecting Indigenous rights and the climate should end financing the oil trade from the Amazon Sacred Headwaters until new safeguards and commitments for no expansion are put in place. It’s time for European banks to play a responsible and constructive role in advancing life over profits.” -Tyson Miller, Forest Program Director, Stand.earth

“The oil industry has a toxic legacy in the Amazon, further exacerbated by recent spills that have contaminated rivers and disrupted the health and food security of Indigenous communities. Even during the COVID-19 pandemic, oil companies continue to pursue expansion, putting Indigenous peoples at even greater risk. These banks cannot claim to uphold their own pledges on climate and human rights while they continue to finance the trade of Amazon oil.” -Moira Birss, Climate and Finance Director, Amazon Watch

About the Amazon sacred headwaters

The Amazon Sacred Headwaters is one of the most biodiverse ecosystems on the planet and helps regulate essential planetary ecosystem services such as the hydrologic and carbon cycles. The region is home to more than 500,000 Indigenous peoples from over 20 nationalities, including peoples living in voluntary isolation on their ancestral lands. New and ongoing oil extraction in the region is a gateway to deforestation and contributes to violations of Indigenous peoples’ rights. Indigenous leaders in the region have repeatedly voiced their opposition to the expansion of the oil industry and other industrial activities in their territories.

Some impacts of the oil industry on the region include the recent oil spill in Ecuador, ongoing oil spills in Peru, and the toxic legacy of activities by Chevron in the region. In Ecuador, 120,000 people living in regions near the rivers, including 27,000 Indigenous peoples, have been impacted by the recent oil spill and related floods. These communities lost their freshwater, livestock, and produce, and some now documented skin diseases caused by crude oil from swimming in the rivers before they knew about the spill. All of these impacts are happening in the context of the COVID-19 pandemic, where the communities can no longer take sanitary precautions.

“I wonder if the executives of banks in Europe know the real cost of their financing. How can they possibly sleep peacefully knowing their money leaves thousands of Indigenous peoples and communities without water, without food, and in devastating health conditions due to the pollution of the Coca and Napo rivers? It’s time for the banks, companies, and consumers of the oil extracted in the Ecuadorian Amazon to acknowledge how their businesses affect our territories and way of life.” -Marlon Vargas, President of the Confederation of Indigenous Nationalities of the Ecuadorian Amazon (CONFENIAE)

“I was raised on the banks of the Coca River. Until now, we have fed on the fish and wildlife that inhabit the water. Today, they are contaminated. We have given most of the wealth to Ecuador, and we cannot continue to live with this contamination. The Kichwa of Orellana don't want just reparations, we also want a remediation of the Coca and Napo rivers.”  -Carlos Jipa, President of FCUNAE (Indigenous Federation of United Communities), the organization that represents the Kichwa communities in Ecuador’s Napo province

"Right now, the river is polluted. It affects us a lot, because we nourish ourselves and drink from the river. The has affected our food supply. Since we live on the banks of the river, we depend on it to survive, especially during this tragic pandemic. People, like my brothers, went fishing and brought back fish, and it had a smell like a pestilence. It was then that we realized there is no way we could consume the fish anymore.” -Verónica Grefa, President of the Tocuya Community

The report outlines the following steps investment banks must take to assure consistency with the environmental and social commitments they have made:

Companies and investors are becoming increasingly concerned about the significant financial risks stemming from biodiversity loss and the destruction of natural ecosystems. In July, the head of sustainable business development at Natixis was quoted in a story on how environmental, social, and governance (ESG) investors are waking up to biodiversity risk, and the same month, Credit Suisse announced it would earmark $300 billion for sustainable finance and give “enhanced consideration” to biodiversity.

Several banks named in the report responded to Stand and Amazon Watch and expressed interest in addressing the issues raised in the report. To date, no banks have updated their policies.

Rabobank said it no longer finances trades from the Amazon Sacred Headwaters region, but it has not committed to updating its policy. Natixis pledged to engage with stakeholders like Stand.earth and Amazon Watch in order to update its policy. UBS and ING Belgium pledged to engage with stakeholders without committing to update their policies. Credit Suisse acknowledged the importance of the report’s findings but evaded responsibility by saying its policies only apply to project financing. BNP Paribas (Suisse) SA and Deutsche Bank did not respond.

About Stand.Earth and Amazon Watch

Stand.earth is an international nonprofit environmental organization with offices in Canada and the United States that is known for its groundbreaking research and successful corporate and citizens engagement campaigns to create new policies and industry standards in protecting forests, advocating the rights of Indigenous peoples, and protecting the climate.

Amazon Watch is a nonprofit organization founded in 1996 to protect the rainforest and advance the rights of indigenous peoples in the Amazon Basin. We partner with indigenous and environmental organizations in campaigns for human rights, corporate accountability and the preservation of the Amazon's ecological systems. Amazon Watch is also a member of the Alliance of Organizations for Human Rights (Alianza de Organizaciones Por Los Derechos Humanos) a coalition of organizations working together to advocate for human rights in Ecuador and bring justice to the indigenous peoples and communities affected by the recent oil spill.