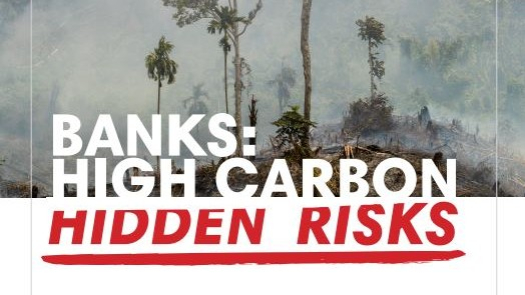 As global investors gather in Berlin for the the largest conference on responsible investment hosted by the United Nations Principles for Responsible Investment (UNPRI), major players in the investment community and UNPRI members, including Vanguard, BlackRock, State Street, Norway's Government Pension Fund Global and Japan’s Government Pension Investment Fund are under intense scrutiny for fueling climate change through their investments in banks. A briefing published by Rainforest Action Network called “Banks: High Carbon, Hidden Risks” demonstrates that large banks such as JPMorgan Chase, Citibank, HSBC, Mitsubishi UFJ, Mizuho, and Deutsche Bank are pumping billions of dollars into carbon-intensive sectors that include extreme fossil fuels like the Canadian tar sands and commodities like palm oil that are driving tropical deforestation.

None of these banks have disclosed their full greenhouse gas emissions resulting from their financing activities, and many have weak safeguards to prevent further bankrolling the climate crisis and associated ESG risks. In addition to climate risk, their financing of these sectors brings critical environmental, social, and governance (ESG) risks such as land conflict and human rights violations, labor abuses, corruption, illegality, pollution, biodiversity loss, and environmental degradation. Banks are not neutral actors and their financing activities are key to shaping a sustainable future, but their contributions to climate change and other harms have long been ignored.  “These so-called “responsible” investors are knowingly putting people’s hard-earned money into investments that are destroying the planet. There’s nothing responsible about that,” said Hana Heineken with Rainforest Action Network.

Demand for improved disclosure is increasing around the world. In June of this year, the industry-led Task Force on Climate-related Financial Disclosures (TCFD) published its long-awaited recommendations, urging companies including banks to disclose to investors, lenders and insurance underwriters about their climate-related financial risks. This month, one hundred investors with assets totaling nearly $2 trillion called on the world’s largest banks to disclose climate-related financial information.

The PRI’s credibility as the preeminent forum for responsible investors is on the line as long as its members continue to allocate their investments into climate-destroying banks. Investors have a responsibility to ensure banks fully disclose their financed emissions and accelerate the transition towards a sustainable, low-carbon economy.