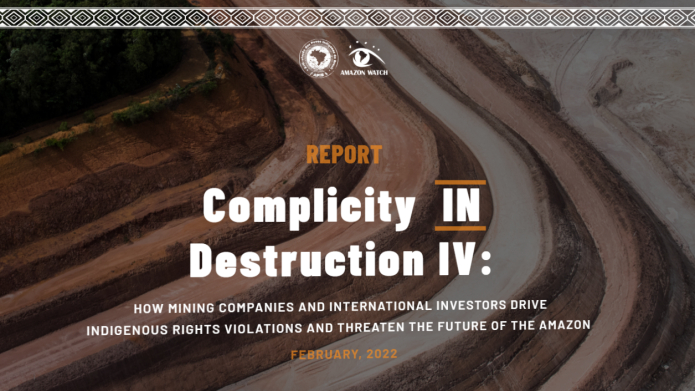 Today the Association of Indigenous Peoples of Brazil (APIB), alongside environmental and human rights organization Amazon Watch, launched Complicity in Destruction IV: How mining companies and international investors drive Indigenous rights violations and threaten the future of the Amazon. This research is the first compilation of case studies exposing International actors' risks of potentially financing illegal mining interests on Indigenous Lands – such as Xikrin do Cateté, Waimiri Atroari, and Sawré Muybu – in the Brazilian Amazon. U.S.-based corporations remain some of the main financiers complicit in this destruction. Together, Capital Group, BlackRock, and Vanguard invested US$ 14.8 billion dollars in the nine companies investigated due to their research applications overlapping Indigenous lands, and track record of rights violations.

"While we struggle to guarantee our right to life, both in our territories and around the world, the Brazilian government and mining companies are trying to advance a ‘project of death.’ We cannot go on living side by side with activities that force Indigenous peoples to mourn the daily murder of our relatives, or to witness the destruction of biomes which we guard, in order to give way to projects that generate no real development, but only destruction and profits for a handful of individuals," says Sonia Guajajara, of APIB's executive coordination.

Complicity in Destruction IV reveals that over the last five years, Vale, Anglo American, Belo Sun, Potássio do Brasil, Mineração Taboca and Mamoré Mineração e Metalurgia (both from Grupo Minsur), Glencore, AngloGold Ashanti and Rio Tinto received a total of US$ 54.1 billion in financing from U.S., Brazilian and international investors. The companies profiled share a history of human and environmental rights violations and a long-lasting interest in expanding their operations into Indigenous territories – where mining is currently illegal.

“There must be a general understanding that these areas are not available for mineral exploration, nor should they be, both because there must be respect for our constitutional right to self-determination as Indigenous peoples over our territories, and because of our lands’ importance in combating climate change and guaranteeing life on the planet. The same goes for traditional territories and other areas of preservation. This understanding must come from the Brazilian government, but also from the companies – which are fully capable of proactively knowing in which areas they are filing requests – and from the financial corporations that finance them," adds Dinaman Tuxá, from APIB's executive coordination.

Brazilian institutions also hold a substantial share in the financing of large mining: PREVI (Banco do Brasil’s Employee Pension Fund) holds the highest investments in these mining companies, with more than US$ 7.4 billion, followed by the private bank Bradesco, with almost US$ 4.4 billion, Caixa Econômica Federal, with US$ 786 million. International private banks also stand out for their investments in these companies, including Crédit Agricole (France), Bank of America and Citigroup (U.S.), Commerzbank (Germany), and SMBC Group (Japan). All of these financial actors are complicit in mining-driven destruction.

“The COVID-19 pandemic, instead of bringing extractive industries to a standstill, actually drove the mining sector to break profit records over the last two years. These banks and asset managers still believe that investing in mining is ‘good’ for business, ignoring the extensive history of violations and impacts caused by this industry. Although many financiers were featured in previous editions of the report, this new edition demonstrates the urgency with which they need to commit to actual change in order to stop mining’s destructive trail. Their risk and exposure are only growing,” says Rosana Miranda, Campaign Advisor of Amazon Watch.

The company that received the most investments and loans in this period was Vale, with US$ 35.8 billion, showing that not even the successive disasters in the towns of Mariana and Brumadinho reduced investors' appetite for the mining company. The data, obtained with the support of the Dutch institution Profundo Research and Advice, also show Canada's interest in financing mining in Brazil. The Royal Bank of Canada, the country's largest private sector bank, poured US$ 512 million into mining companies, and is the main institutional investor of the Volta Grande gold mining project, by Belo Sun Mining Corp, which is considered both socially and ecologically unfeasible.

Complicity in Destruction IV reveals that, despite recent statements by big mining companies claiming they would abandon their interests in Indigenous territories in Brazil, thousands of mining applications overlapping these areas are still active in the National Mining Agency’s (ANM) database. Opening up Indigenous lands to mining and prospecting remains at the center of Bolsonaro's agenda. With the advancement of federal policies such as Bill 191/2020 and Bill 490/2007 in Congress, these applications serve to grant mining companies priority to explore these territories if the bills succeed.

“The environmental damages and threats against the lives of forest peoples by mining activities are brutal and have only worsened under Bolsonaro’s administration. Last year, mining-related deforestation in the Amazon increased by 62% compared to 2018 – the year he was elected. We are aware that the approval of Bill 191 could cause the loss of 16 million hectares of the Amazonian rainforest. With the rainforest at the tipping point of ecological collapse, we need to involve all the actors behind this industry. Governments, companies, and investors must all be held to account and stop this destruction. If companies fail to act, investors must divest," says Ana Paula Vargas, Brazil Program Director of Amazon Watch.

Following the release of Complicity in Destruction III, APIB and Amazon Watch began mapping the interests of large mining companies overlapping Indigenous lands in 2020. Despite statements by giants such as Vale and Anglo American, claiming they would withdraw their applications for research and mineral exploration in these territories, our research shows that many applications remain active in ANM’s system—in some cases, there was even an increase in the number of requests. Additionally, some applications were resubmitted so that exploration areas remained directly adjacent to Indigenous lands, still causing enormous impact.

The report focuses on the mining interests in Indigenous lands from nine companies: Vale, Anglo American, Belo Sun, Potássio do Brasil, Mineração Taboca/Mamoré Mineração e Metalurgia (both from Grupo Minsur), Glencore, AngloGold Ashanti and Rio Tinto. Together, as of November 2021, they had a total of 225 active mining applications overlapping 34 Indigenous Lands — an area that corresponds to 5,700 square kilometres or more than three times the city of London.

The Indigenous lands that are most affected by these applications are Xikrin do Cateté (PA), Waimiri Atroari (AM), and Sawré Muybu (PA). The bulk of applications are concentrated in the Brazilian state of Pará, which increased twofold between July and November 2021. The data was obtained through a partnership with the Mined Amazon project, from the InfoAmazonia portal, which resulted in an interactive dashboard — launched in tandem with the report — allowing real-time searches into the ANM database.

Complicity in Destruction IV also details the impacts and rights violations carried out by the mining companies Vale, Anglo American, Belo Sun, Potássio do Brasil, and Mineração Taboca in five case studies. With the support of the Mining Observatory, the history of these conflicts and their current developments were outlined, ranging from the invasion of traditional territories, contamination by heavy metals, and disregard for the right to Free, Prior, Informed consultation and Consent. Through testimonies from the affected communities, which challenge the companies' official statements about their initiatives, the report shows how the presence and activities of these corporations forever alter the lives of these peoples and communities. Mining in the Amazon, specifically within Indigenous communities, can also destroy ecosystems and contribute to climate change.

Coal Mining | Mining | Nuclear Electric Power Generation
There are no companies active for this item now.
on record