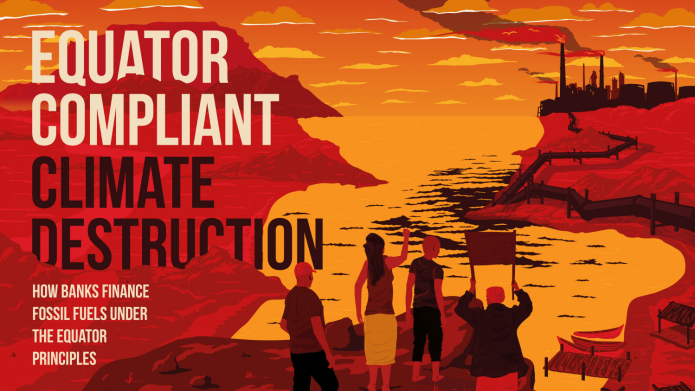 New research into finance for the fossil fuel industry provided under the Equator Principles –  banks’ own rules for financing large infrastructure projects – has found that since the Paris Climate Agreement was signed at the end of 2015, signatory banks have been involved in financing at least 200 fossil fuel projects. This is despite the Equator Principles including a commitment for signatory banks to “support the objectives of the Paris Agreement”. The projects typically not only have a large adverse impact on the world’s climate but also cause substantial damage to communities and the environment.

BankTrack’s new report, “Equator Compliant Climate Destruction: How banks finance fossil fuels under the Equator Principles”, highlights eight climate destructive fossil fuel projects that have been financed ‘under Equator’ since 2016, the first full year after the signing of the Paris Climate Agreement. This is despite the commitment made in the preamble of the Principles “support the objectives” of the Paris agreement.

These fossil fuel projects include the Vung Ang 2 coal power plant in Vietnam which will not only emit large quantities of air pollutants that affect the health of local communities, but in order to build the plant large swathes of forests need to be cleared and thousands of residents relocated. Japanese banks SMBC, MUFG, Mizuho and Sumitomo Mitsui Trust Holdings all financed this project. Also, the Coastal GasLink pipeline that runs through the lands of the Wet’suwet’en Indigenous nation without their consent and has many environmental risks such as pollution and diesel spills. Equator banks BMO, Caixabank, CIBC, Citi, NAB, RBC and Scotiabank all reported financing the project, but many more Equator banks that failed to report are financing the project. On 19 October, the Gidimt’en Checkpoint from the Wet’suwet’en Nation issued a letter to over 35 investors of the pipeline project demanding them to withdraw all support. In addition, the Mozambique LNG project that will likely emit around 44 million tons of CO2 per year and is located in a region suffering from the consequences of ongoing violent conflict, only made worse by militant attacks and the use of the army and private security companies brought in to protect the project’s facilities. Crédit Agricole and FirstRand both reported financing the project, but many other Equator banks that failed to report are also financing the project.

The report also finds, based on an analysis of data from the Banking on Climate Chaos report, the 37 largest Equator banks together provided US$ 2.9 trillion to fossil fuel projects and companies globally between 2016 and 2020, including US$ 1.2 trillion to the top 100 companies expanding the fossil fuel industry. This includes investments into new exploration projects or infrastructure that further locks us into a fossil-fuelled future.

The ongoing financing of fossil fuel expansion projects is at odds with the recent urgent warnings from the IPCC, International Energy Agency and UN bodies, that new fossil fuel developments are out of line with the Paris Climate Agreement goal to keep the average global temperature rise to 1.5 degrees.

The BankTrack led Global Call on Banks from the Fossil Banks No Thanks platform sets out civil society expectations on banks regarding aligning their portfolios with the 1.5 degree goal of the Paris Agreement.

In addition, the report analyses whether the climate-related requirements set out in the Principles are being met in practice for eight case study projects. These include requirements to conduct and publish a Climate Change Risk Assessment (CCRA) (1); to annually publish greenhouse gas (GHG) emissions reports during the operational phase of projects; and to conduct an Alternatives Analysis which evaluates lower GHG intensive alternatives to the project.

Of the eight projects analysed, none were found to be fully compliant with the climate-related requirements under the Equator Principles. There is no evidence that any of the projects analysed has so far conducted a CCRA; neither of the projects that are in the operational phase have published adequate GHG emissions reports; and none of the projects show evidence that an adequate alternatives analysis was conducted in line with the Principles. In addition, our research found that in two cases, the Environmental and Social Impact Assessments failed to adequately consult local communities.

Hannah Greep, coordinator of BankTrack’s Equator Principles campaign and author of the report, commented: “In the lead up to the Glasgow Climate Summit, COP26, in November 2021, it is more urgent than ever that banks align their portfolios with the 1.5 degree goal of the Paris Agreement. The findings of this report highlight the deep disconnect between the overall objective of the Equator Principles to act as a tool for managing environmental and social risk and the ongoing financing of fossil fuel projects by Equator banks. The Equator Principles Association must act now to ensure that the Principles no longer facilitate climate destruction.”

Eri Watanabe, 350.org Japan Finance Campaigner: “Among global banks, Japanese banks have supported the largest number of fossil fuel projects under the Equator Principles since the Paris Agreement. Contrary to the principle of 'supporting the objectives of the Paris', the amount of loans to fossil fuel projects by Japanese banks has consistently risen before the global pandemic. There has been a large gap between promises and execution, such as financing the Vung Ang 2 in Vietnam, which fell into an 'exception' of their restricted coal policies. With COP26 on the horizon, the banks must live up to their words and start to phase out fossil fuels and instead direct their finance to sustainable solutions in order to avoid climate catastrophe, respecting the rights of the affected people and future generations."

Cansin Leylim, Associate Director of Global Campaigns at 350.org: "If any further proof was needed, the physical risks of climate change were underlined this year when floods killed people in Germany and the number of wildfires soared in Turkey, Italy and Greece after Europe recorded its second-warmest summer. Banks are responsible for the destruction we are witnessing everywhere, every year. Banks claim to be supportive of the Paris Agreement and the goals to stay below 1.5 degree while still giving trillions of dollars to fossil fuel development. The money they have provided to fossil fuel projects brought destruction to so many, while they could have been put into actions to help the most vulnerable tackle the climate crisis. This is why on October 29th onwards, people are rising up and demanding that banks do their fair share by ending fossil finance and directing it to climate action."

Osprey Orielle Lake, Executive Director of the Women's Earth and Climate Action Network (WECAN): “What is needed immediately from the Equator banks and all financial institutions is a show of leadership and dedication to ecological sustainability and respect for human and Indigenous rights, as we face the unprecedented challenges of a world plunging into climate chaos. Divestment from dirty fossil fuel extraction and infrastructure demonstrates a commitment to the 1.5 degree target set forth by the Paris Agreements and to our collective future. As the global community prepares for COP26, the revolving door between financial institutions and fossil fuels must be closed, and Equator banks must respond to calls for justice and accountability, and instead actively invest in renewable and regenerative energy, economic and ecological justice, and healthy communities for all."

(1)The CCRA is a new requirement under EP4, the newest iteration of the Principles which came into effect from 1st October 2020, and therefore only applies to projects that reached financial close after this date. However, Equator banks were encouraged, but not mandated, to apply the new Principles (published in November 2019) to transactions before the implementation date and therefore BankTrack has included it in its assessments for projects that came to a financial close between November 2019 and October 2020.

This report was updated on November 16th to correct a misrepresentation of the application of EP4. Previously, the report stated that EP4 applied to transactions that reached a financial close after the implementation date of EP4 (October 1st, 2020). However, EP4 is applied to projects which are mandated on or before October 1st, 2020 which happens earlier in the lifecycle of a project than financial close. The text in this report has been updated to reflect this.