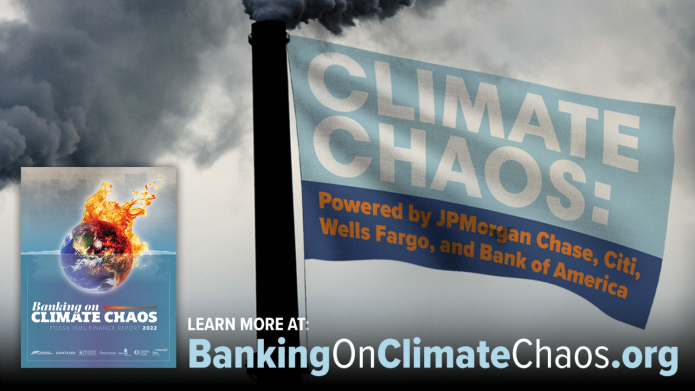 Released today, the 13th annual Banking on Climate Chaos report, the most comprehensive global analysis on fossil fuel banking to date, underscores the stark disparity between public climate commitments being made by the world’s largest banks, versus the reality of their largely business-as-usual financing to the fossil fuel industry.

The report documents that in the six years since the Paris Agreement was adopted, the world’s 60 largest private banks financed fossil fuels with US$ 4.6 trillion, with US$ 742 billion in 2021 alone. 2021 fossil fuel financing numbers remained above 2016 levels, when the Paris Agreement came into force. Of particular significance is the revelation that the 60 banks profiled in the report funneled US$ 185.5 billion just last year into the 100 companies doing the most to expand the fossil fuel sector.

Banking on Climate Chaos was authored by Rainforest Action Network, BankTrack, Indigenous Environmental Network, Oil Change International, Reclaim Finance, Sierra Club, and Urgewald, and is endorsed by 500 organizations from 49 countries around the world.

As global oil and gas markets are rocked by Russia’s invasion of Ukraine, the data reveal JPMorgan Chase to be the biggest banker covered in this report for Russian state energy giant Gazprom, both in terms of 2016-2021 totals and when looking only at last year. JPMorgan Chase provided Gazprom with US$ 1.1 billion in fossil fuel financing in 2021.

The report includes a timeline that lays out how banks that joined the Net-Zero Banking Alliance (NZBA, part of the Global Financial Alliance for Net Zero, GFANZ) last year simultaneously financed some of the most egregious oil and gas expansion companies, potentially helping to lock the planet into decades of climate-warming emissions. Immediately following the April 2021 launch of the NZBA, many signatory and soon-to-be-signatory banks engaged in huge transactions completely counter to achieving “net zero,” including: May 2021: US$ 10 billion to Saudi Aramco (Citi, JPMorgan Chase), US$ 1.5 billion to Abu Dhabi National Oil Co. (Citi); June 2021: US$ 12.5 billion to QatarEnergy (Citi, JPMorgan Chase, Bank of America, Goldman Sachs); August 2021: US$ 10 billion to ExxonMobil (Citi, JPMorgan Chase, Bank of America, Morgan Stanley). Out of the 44 banks in this report currently committed to net-zero financed emissions by 2050, 28 still don’t have a meaningful no-expansion policy for any part of the fossil fuel industry.

The world’s leading climate scientists have concluded that existing reserves of fossil fuels contain more than enough carbon pollution to break our remaining ‘carbon budget’ and thrust the world past 2 degrees Celsius of warming — let alone the 1.5 degree aspirations of the Paris Agreement — and the climate catastrophe that entails.

The new Global Oil and Gas Exit List exposes the fact that upstream oil and gas expansion is remarkably concentrated: the top 20 companies are responsible for more than half of fossil fuel development and exploration. Today’s report shows that bank support for those companies is also remarkably concentrated: the top 10 bankers of those top 20 companies are responsible for 63% of the companies’ big-bank financing since Paris. Each of those top ten bankers is formally committed to net zero by 2050: JPMorgan Chase, Citi, Bank of America, BNP Paribas, HSBC, Barclays, Morgan Stanley, Goldman Sachs, Crédit Agricole, Société Générale.

Alarmingly, tar sands saw a 51% increase in financing from 2020-2021 to US$ 23.3 billion, with the biggest jump coming from Canadian banks RBC and TD, with JPMorgan Chase still a major player. Fracking saw US$ 62.1 billion in financing last year, dominated by North American banks with Wells Fargo at the top. JPMorgan Chase, SMBC Group, and Intesa Sanpaolo were the top bankers of Arctic oil and gas last year, with $8.2 billion in funding to the sector in 2021. Morgan Stanley, RBC, and Goldman Sachs were 2021’s worst bankers of LNG, a sector that is looking to banks to help push through a slate of enormous infrastructure projects. Big banks funneled US$ 52.9 billion into offshore oil and gas last year, with U.S. banks Citi and JPMorgan Chase providing the most in 2021. Coal mining financing is led by the Chinese banks, with China Everbright Bank and China CITIC Bank as the worst in 2021. Big banks overall provided $17.4 billion to the sector last year.

In the next two months, all six Wall Street banks are expected to face shareholder resolutions calling on them to stop financing fossil fuel expansion and otherwise truly align their business practices with limiting global warming to 1.5°C.

"Climate science has made it inescapably clear that there can be no expansion of fossil fuels if we are to limit global warming to 1.5˚C. But banks have continued to fund companies planning to open up new fossil fuel frontiers, including by financing disastrous projects like the East African Crude Oil Pipeline, expansion of fracking in Argentina's Vaca Muerta and the expansion of the Trans Mountain tar sands pipeline. Any serious 'Net Zero by 2050' commitment must also mean excluding all fossil fuel expansion projects and companies from financing."

“Any further expansion of fossil fuels risks locking humanity into generations of climate catastrophe, yet the top fossil clients of the world’s largest banks are still being showered with tens of billions of dollars even as they actively expand drilling, mining, fracking and other fossil fuel development unabated. With Wall Street banks leading the charge, these financial institutions are directly complicit in undermining a climate stable future for us all and must immediately end their support of any further fossil fuel infrastructure expansion.”

"These banks are funding climate chaos by financing fossil fuel extraction to the tune of US$ 742 billion in 2021 alone. Indigenous peoples have long been leading the fight for the sacredness of the land, water and Earth. Mother Earth has always given us what we need to thrive. We will not back down until our natural balance is restored and anyone helping fund the extractive destruction of our communities will be held accountable."

"The data is clear: despite their net zero pledges and restrictions on fossil fuel financing, French banks BNP Paribas, Crédit Agricole, Société Générale and Natixis are still massively supporting oil and gas expansion, at odds with what climate science requires. No surprises there: as recently revealed by the Oil and Gas Policy Tracker, the many flaws in their oil and gas policies enable the banks to support major expansionists such as Gazprom, TotalEnergies, Saudi Aramco and BP despite their toxic fossil fuel plans. The war on Ukraine is another stark reminder that oil and gas are at the root of both war and climate change. It’s high time banks close the policy gaps and turn off the taps."

"Despite their splashy climate pledges, big banks have largely continued with business-as-usual and actually increased their overall fossil fuel financing since the Paris Agreement. This report makes it clear that banks must clean up their act and stop funding the expansion of dirty fossil fuel projects like fracked gas exports, tar sands pipelines, and offshore drilling in order to align with what the science demands and what their own commitments require. As we look ahead to shareholder season, we'll be keeping up the pressure on the banks and their investors to take these critical reforms seriously and stop bankrolling the fossil fuel industry's reckless expansion plans."

"On top of unleashing climate chaos around the globe, our continued reliance on fossil fuels is propping up some of the world's most heinous political regimes. Russia is waging a brutal war on Ukraine where it treats civilians as legitimate military targets. Saudi Arabia still maintains its violent stranglehold on Yemen, and at home, it put 81 men to death by beheading in a single day. Yet the rest of the world turns a blind eye and keeps sending such oppressive regimes bloody fossil fuel checks. We desperately need to direct global financial flows away from destructive fossil fuels and the cruel and corrupt governments that weaponize them against our environment and ourselves."