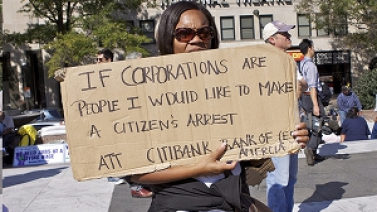 Finance experts gathered in Washington, DC this week to decide how the sector can contribute to creating a stable and sustainable economy.

The meeting, organised by the UN Environmental Programme Finance Initiative (UNEP FI), was held in a conference centre across the road from where Occupy DC protesters were camped out, inspired by the Occupy Wall Street movement.

And the financial crisis is not helping efforts, according to some. The problems in Europe and the US are being used as an excuse "to close down the sustainability agenda", said Yvo de Boer, global advisor on climate change and sustainability at consultancy KPMG and the UN's former climate chief.

Several ideas emerged in the first morning of presentations and debates. First is the need for financiers to contribute to government policies that enable money to flow in the right direction - towards companies that pursue sustainable development - by putting a price on pollution, for example.

"It's not enough to invest in the best companies," Barbara Krumsiek, president and CEO of Calvert Investments, a Washington, DC-based manager of socially and environmentally responsible equity funds. "We need to push for global standards that enable the best companies to succeed."

But even judging which companies are best is tricky. Rick Lacaille, global chief investment officer at asset management firm State Street Global Advisors, said it is not always clear that a company with better "extra financial" performance - in social, environmental and governance factors - will outperform its peers financially.

"Banks have a responsibility to build a strong and sustainable economy," she added.

However, while transformational deals in sustainable projects are happening, most banks are also continuing to finance unsustainable industries, such as fossil fuel extraction, said Johan Frijns, Netherlands-based coordinator of BankTrack, an NGO focused on the private financial sector and its social and environmental effects.

"I would feel much more optimistic if banking operations included a need for transparency, urgency and the need to make real choices," he said.

Delegates discussed several proposals that are being developed ahead of the Rio+20 summit next year. The landmark Rio Earth Summit in 1992 gave rise to a number of influential institutions and agreements - including the UN Framework Convention on Climate Change, the Commission on Biological Diversity, and the Forest Principles, to name three.

Improved corporate reporting is one proposal that will go to the 2012 Earth Summit. Several groups are working on this, including the Prince of Wales-backed International Integrated Reporting Committee and the Corporate Sustainability Reporting Coalition, led by UK-based Aviva Investors.

The latter is calling for UN member states to adopt a binding commitment to develop regulations that will force companies to integrate material sustainability issues into their annual report and accounts.

The Principles for Sustainable Insurance (PSI) is another proposal that is set to be launched at the summit. Insurance companies can be a "strong lever of sustainable development", said Anthony Kuczinski, president and CEO of Munich Re Americas and, because of their need to focus on future risks, insurers have an "early warning" function.

The PSI will help them proactively and systematically manage sustainability issues, he said.