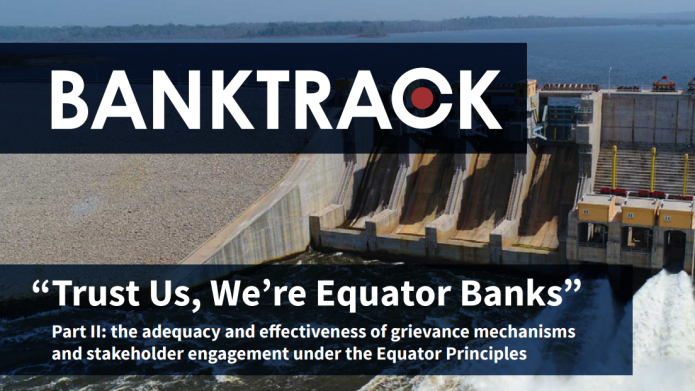 Communities affected by projects financed under the Equator Principles, banks’ own rules for financing large infrastructure projects, report that consultation is unsatisfactory and they are unable to seek redress through effective accountability mechanisms. This is despite the Principles requiring that effective stakeholder engagement and project-level grievance mechanisms are put in place. These issues are reflected in the findings of BankTrack’s new briefing paper, “Trust Us, We’re Equator Banks” Part II, published today. Although banks began implementing a new version of the Equator Principles, “EP4”, in October, the new Principles do not address these shortcomings.

The paper investigates nine projects financed under the Equator Principles since 2016, in high-risk sectors such as mining, hydropower, coal, oil and gas. It finds that the banks financing the projects failed to ensure adequate assessment documentation was provided to affected stakeholders for seven out of the nine projects analysed, although this is a requirement of the Principles. In addition, it found that although the Equator Principles require project-level grievance mechanisms to be put in place so that project-affected communities can raise complaints and seek resolution, in many cases these mechanisms are not actually being used. Reasons include distrust in project sponsors and a lack of awareness of the mechanism.

For example, local communities impacted by the Nachtigal Hydropower project in Cameroon have been unable to access full environmental and social impact studies, including resettlement and compensation actions plans. In addition, communities reported that consultation meetings were often threatening environments where individuals felt unable to raise their concerns. Although the company has implemented a project-level grievance mechanism, local communities did not know that it existed.

This briefing paper is the second instalment in an effort to systematically evaluate for the first time whether key aspects of the Equator Principles are being followed. It follows an earlier paper which analysed 37 projects and found no evidence of stakeholder engagement processes or project-level grievance mechanisms in 65% of cases. The results highlight a number of problems regarding compliance with the Principles on the ground.

Hannah Greep, coordinator of BankTrack’s Equator Principles campaign and author of the briefing paper, commented: “Communities that are confronted by plans for large infrastructure projects that potentially negatively impact their lands, rights and livelihoods should be able to rely on the Equator Principles to ensure that they are being adequately consulted on how such projects are designed and how impacts will be mitigated. Similarly, when things go wrong, which they inevitably sometimes do, the Principles are meant to ensure that their grievances are properly addressed and resolved.

In the Equator Principles, Principle 5 requires all Category A and B projects (The highest risk categories) to have an ongoing process of effective stakeholder engagement with affected communities and other stakeholders. Under Principle 6, they require all Category A projects and “as appropriate” Category B projects, to establish a project-level grievance mechanism which is designed to receive and facilitate resolution of concerns and grievances about the project’s environmental and social performance.

Hydroelectric Power Generation
There are no projects active for this item now.
on record