This profile is no longer actively maintained, with the information now possibly out of date
Send feedback on this profile
Download as PDF Created before Nov 2016
Last update: 2016-11-01 00:00:00 Share this page: 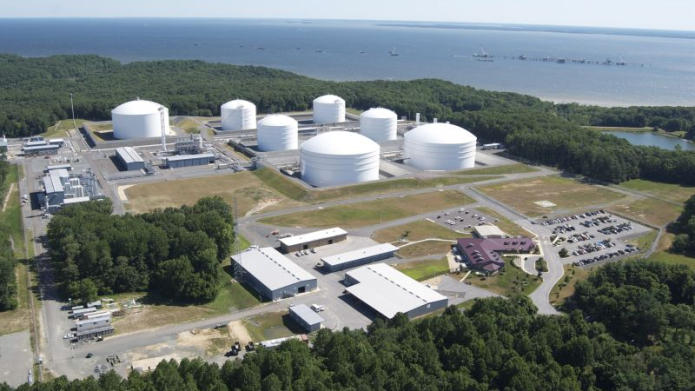 Dominion Cove LNG project expected to be completed in 2017

More dangerous fracking If the Cove Point export facility is approved, it will provide a strong economic incentive for companies to expand fracking across our region, including in Maryland, where no drilling yet occurs. In other states, the expansion of fracking has caused drinking water contamination, air pollution, illnesses and even earthquakes.

Risking the Chesapeake Bay economy and ecology The Chesapeake Bay supports more than a trillion dollars in economic activity through seafood and tourism. Exporting gas from Cove Point would increase traffic of massive, 1,000-foot long tankers carrying volatile, potentially explosive liquid fuel. Harmful emissions from those tankers would worsen local air quality. They would also dump billions of gallons of dirty ballast wastewater into the Bay each year. Construction of the gas liquefaction facility would require the clearing of forests and barging in of heavy construction materials along the Patuxent River, further threatening the network of rivers, wetlands and forests that attract tourists and support rare species of plants, animals and migratory birds.

A web of destructive fossil fuel architecture To support the export of LNG on the East Coast, new pipelines will be needed throughout the Marcellus shale states to get gas from new drilling wells to the export terminal. Pipelines, which inevitably leak and rupture causing dangerous explosions and fires, would snake through our waterways, backyards and farms. Noisy, polluting compressor stations could be required from Fairfax, Virginia to Frederick, Maryland and everywhere in between to keep gas moving through pipelines. Residents of the small, rural town of Myersville, Maryland are already fighting a 16,000-horsepower compressor station that Dominion wants to construct, which would be located just a mile from their elementary school.

Making natural gas more expensive at home If all the proposed LNG export projects in the U.S. are approved, the result would be the export of more than 40 percent of our current production of natural gas. This means more competition at home, and thus, higher prices for domestic consumers and industries.

According to the NERA Economic Consulting Analysis commissioned by the U.S. Department of Energy, exporting natural gas harms every major sector of the U.S. economy, except the gas industry. In the graphic above, negative numbers represent economic loss, positive numbers equal economic gain.

Consequences for climate change Looking at the big picture impacts of fracking, the International Energy Agency concludes that a worldwide reliance on fracked gas would lead to six degrees Fahrenheit of atmospheric warming, in other words, cooking the planet. LNG exports are even more energy intensive than gas drilled and burned at home. After the gas is transported, liquefied for export and then re-gasified to burn, the lifecycle emissions of exported LNG are 15 percent higher than gas consumed domestically.

To power liquefying and cooling operations, Cove Point would require construction of a new gas plant on-site that would be Maryland's fourth-largest climate polluter. From start to finish of the LNG export process, Cove Point would trigger more planet-heating pollution than Maryland's entire fleet of seven coal-fired power plants combined.

If we're going to preserve a safe climate, we can't open the floodgates to fracked gas exports on the East Coast-just like we can't build the Keystone XL tar sands oil pipeline to the Gulf Coast or new coal export terminals on the West Coast. We can and must invest instead in clean energy, making our region a leader in offshore wind power, new solar installations and energy efficiency, technologies that will create jobs and grow our economy permanently and safely.

The new liquefaction facility that Dominion would have to build on-site to process gas for export would emit more heat-trapping carbon dioxide than all but three of the state's existing coal plants. In all, given the energy-intensive process of extracting, transporting and processing gas for export, Cove Point would trigger more greenhouse gas emissions than any other single source of climate pollution in Maryland.

Dominion Cove LNG project expected to be completed in 2017

Barclays Capital (United Kingdom) and the American investment banks Citigroup Global Markets and J.P. Morgan Securities are acting as the underwriters and the joint book-running managers of this offering (Source: Dominion Midstream Partners, "Amendment No. 1 to Form S-1 Registration Statement Under The Securities Act Of 1933", Dominion Midstream Partners, 21 May 2014.)

Dominion Resources will be the ultimate owner of the general partner of Dominion Midstream and will provide all of the necessary funding.

ALL ABOUT UNITY: THANK YOU AND ONWARD FROM THE STOP GAS EXPORTS RALLY

The date of the issuance, the number of common units to be offered and the price range for the offering have not been determined, but Dominion Midstream aims to raise approximately USD 400 million with the IPO. Barclays Capital (United Kingdom) and the American investment banks Citigroup Global Markets and J.P. Morgan Securities are acting as the underwriters and the joint book-running managers of this offering.

Dominion Midstream intends to use the estimated net proceeds of the IPO to make a contribution to Cove Point in exchange for a portion of the preferred equity interest. Dominion Midstream intends to cause Cove Point to use the net proceeds contributed to it in connection with this offering to fund a portion of the development and construction costs associated with its planned new project called "Dominion Cove Point LNG liquefaction project" (Liquefaction Project). This project will enable the facility to liquefy domestically-produced natural gas delivered by customers from virtually anywhere in the United States (although most of it will likely come from the Marcellus shale play) and export it as LNG to foreign countries (in this case Japan and India). The projects will cost between approximately USD 3.4 billion and USD 3.8 billion, exclusive of financing costs. The permitting and other legal preparations for this project started in October 2011 and are still ongoing (source: Profundo report).