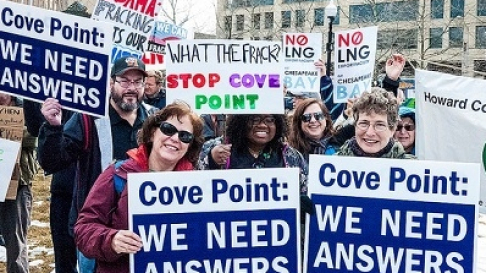 "Investors buying the common units of Dominion Midstream Partners (DM.) should realize that this company's cash-flow is purely dependent on the Cove Point Liquefaction Project, for which further delays are expected," said Jan Willem van Gelder, director of Profundo, the research firm that prepared the investor risk report. "In combination with the limited voting power of the unitholders and the dominant position of parent company Dominion Resources, investors are likely to face very uncertain returns."

Key performance risks highlighted in the report include:

"Dominion Midstream is concentrating significant financial risk on the success of Cove Point. The project faces continued delays in a business environment in which carbon pollution regulations are becoming stricter and the feasibility of the tax-free, master limited partnership structure is uncertain," said Matt Patsky, CEO of Trillium Asset Management. "Long-term, I believe that investment in renewable energy infrastructure is a much smarter decision."

Dominion Midstream filed an application with the Securities and Exchange Commission (SEC) in March 2014 to proceed with an IPO estimated to be worth approximately $400 million. In May, a Dominion shareholder and the Chesapeake Climate Action Network filed an official complaint with the SEC over Dominion's failure to adequately disclose significant risks associated with the project.

"The Cove Point facility is already behind its original schedule. Even if Dominion receives the regulatory approvals it needs to begin construction, public interest groups are preparing for significant legal challenges that could cause further delay," said Diana Dascalu-Joffe, senior general counsel at the Chesapeake Climate Action Network. "The project depends on an environmentally toxic and economically volatile fracking bubble, is vulnerable to the same climate change impacts it would worsen, and could be subject to increasingly costly regulations because of its large pollution footprint. This report warns investors of the full array of financial and reputational risks that come with Dominion's massive fossil fuel bet."

The $3.8 billion Cove Point gas export terminal, proposed on the Chesapeake Bay in southern Maryland, continues to face steep public opposition and protests because of its potential role in speeding hydraulic fracturing, or "fracking." The proposal would also create global warming pollution on par with coal, and expose hundreds of nearby residents to potential explosion, flammable vapor cloud, and other liquefied gas catastrophes. Dominion is awaiting permit approval from the Federal Energy Regulatory Commission, which received an unprecedented number of public comments-more than 150,000-gathered by dozens of community, state and national groups that oppose the project.

The Profundo risk report was commissioned by the Chesapeake Climate Action Network.

The full report is available at: http://chesapeakeclimate.org/wp/wp-content/uploads/2014/09/Dominion-Midstream-IPO-Risk-Report-9-10-2014.pdf