Home › Blog
Glasgow wrap-up: updates from banks and civil society at COP26
With COP26 behind us, it’s as clear as ever before that banks must act urgently to help achieve the goal of limiting global warming to 1.5 C.
By: BankTrack
2021-11-17
Nijmegen
Contact: 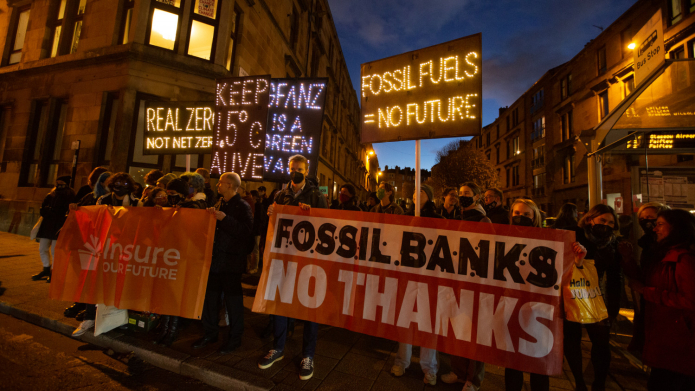 The Glasgow climate summit is over, and one thing is for sure - after two weeks of negotiating the world remains on track for more than two degrees of warming this century. Factor in tipping points, and the trajectory remains towards a planet which is largely uninhabitable. The agreement eventually reached was a compromise that even the COP secretary Alok Sharma acknowledged was a “deep disappointment” that will need urgent correction already next year at COP27.

The summit itself started promisingly, with a series of carefully stage-managed and pre-agreed, but nonetheless significant announcements. Over 100 countries took a pledge to stop deforestation by 2030 and to reduce methane emissions. A group of twenty governments, including the US, Canada and Italy, pledged to stop financing fossil fuels abroad from 2022, while another, partly overlapping group of countries forming the Beyond Oil and Gas Alliance (BOGA), committed to end future oil and gas production within their borders.

After these initial hopeful signs it slowly became clear however that the urgently needed breakthrough in global climate policy would not materialize. The final text eventuallt agreed upon in "COP overtime", had been significantly watered down but crucially, maintained an historic reference to the need to 'phase down' fossil fuels. This, and the commitments of some governments on fossil fuel finance will give the growing movement of climate activists around the world even more ammunition to go after the companies that push for further extraction and burning of fossil fuels, and the banks that finance them.

At the end of the day, the most important action didn’t happen inside the COP, but outside, where civil society fired up one protest after another, with a strong and growing focus on the crucial role that 'fossil banks' play in fuelling the climate crisis.

This digest provides an overview of the most important bank-focused news from two weeks of COP26.

When it comes to bank commitments, much was promised but, with only some exceptions, little actually delivered by the global banks that continue to finance the fossil fuel industry. The Glasgow Financial Alliance for Net Zero (GFANZ) opened the ball on 1 November, when, in direct response to a critical report of Reclaim Finance, it released a fact sheet listing actions the alliance is taking to “ensure the rigour and impact of financial sector net zero commitments”. While the statement acknowledges that ‘accelerating the phase-out of fossil fuels is essential for achieving the goals of the Paris Agreement’, the bank arm of GFANZ, the Net Zero Banking Alliance (NZBA) has still not made any concrete commitments to immediately address fossil fuel financing of participating banks. To its credit, a week earlier, GFANZ had already asked policymakers to “set a target for mandatory … net zero transition plans by 2024”, an interesting ask from the industry alliance, which would certainly benefit some of its more progressive members by creating a more level playing field.

On 2 November, Dutch ethical bank Triodos announced concrete targets to reach net zero by 2035, positioning itself as the frontrunner in the banking industry, where vague net zero by 2050 pledges are still commonplace. On the same day, Société Générale announced new exclusions for some companies involved in unconventional oil and gas. The French bank also committed to reducing the carbon footprint of its equity and corporate bond portfolios by 30% by 2025 compared to 2018. Reclaim Finance issued a critical response

Hopes were high for ground breaking commitments coming from the finance sector on November 3, Finance Day, but although some commitments indeed were made, overall the result was not impressive

Morgan Stanley announced 2030 targets to reach its goal for net-zero financed emissions by 2050. Sierra Club explained  the target is based on emissions intensity rather than reduction in absolute emissions, and does not rule out support for companies expanding oil, gas and coal. HSBC, Natwest and Lloyds joined the Powering Past Coal Alliance, while Bank of New Zealand joined the NZBA. BBVA announced 2030 reduction targets for a number of high emissions sectors including electricity generation, after it had already announced a phase out from coal financing in spring 2021. The GFANZ released a progress report, boasting of its membership growth to 90 banks and $130 Trillion in Net Zero Commitments. Stop the Money Pipeline condemned the alliance for ignoring fossil fuel financing, while Rainforest Action Network meanwhile pointed out the USD$ 575 billion provided by the Net Zero Banking Alliance (NZBA) to the fossil fuel industry in 2020.

At the end of the first week official COP sponsor Natwest published a new coal policy, committing to end all lending for coal by 2030, but ShareAction was not impressed. Credit Suisse followed the same day with another coal policy update, which Reclaim Finance explains unfortunately still contains many loopholes.

The second week of COP26 saw less bank policy updates, but it did see publication of research by The Bureau of Investigative Reporting that showed that 12 banks, led by HSBC, lobbied Mark Carney against action on climate change by seeking to delay the NZBA’s deadline for setting financed emissions targets. Stop the Money Pipeline published a press release featuring the Action Center on Race and the Economy, ShareAction, Market Forces, BankTrack and Stand.earth calling out banks lobbying for watered down Net Zero commitments. On 9 November Australian NAB committed to limiting funding for oil and gas projects to US$ 2.4 billion, but MarketForces explained the new policy allows it to continue funding expansion of the fossil fuel industry.

Right from the beginning of COP it was clear that activists were determined to expose the role of banks as financiers of the fossil fuel industry. Even before the COP officially started posters appeared in Glasgow and Barcelona calling out Banco Santander’s fossil fuel financing. Later in the week, we saw a projection on Santander’s offices in Glasgow. 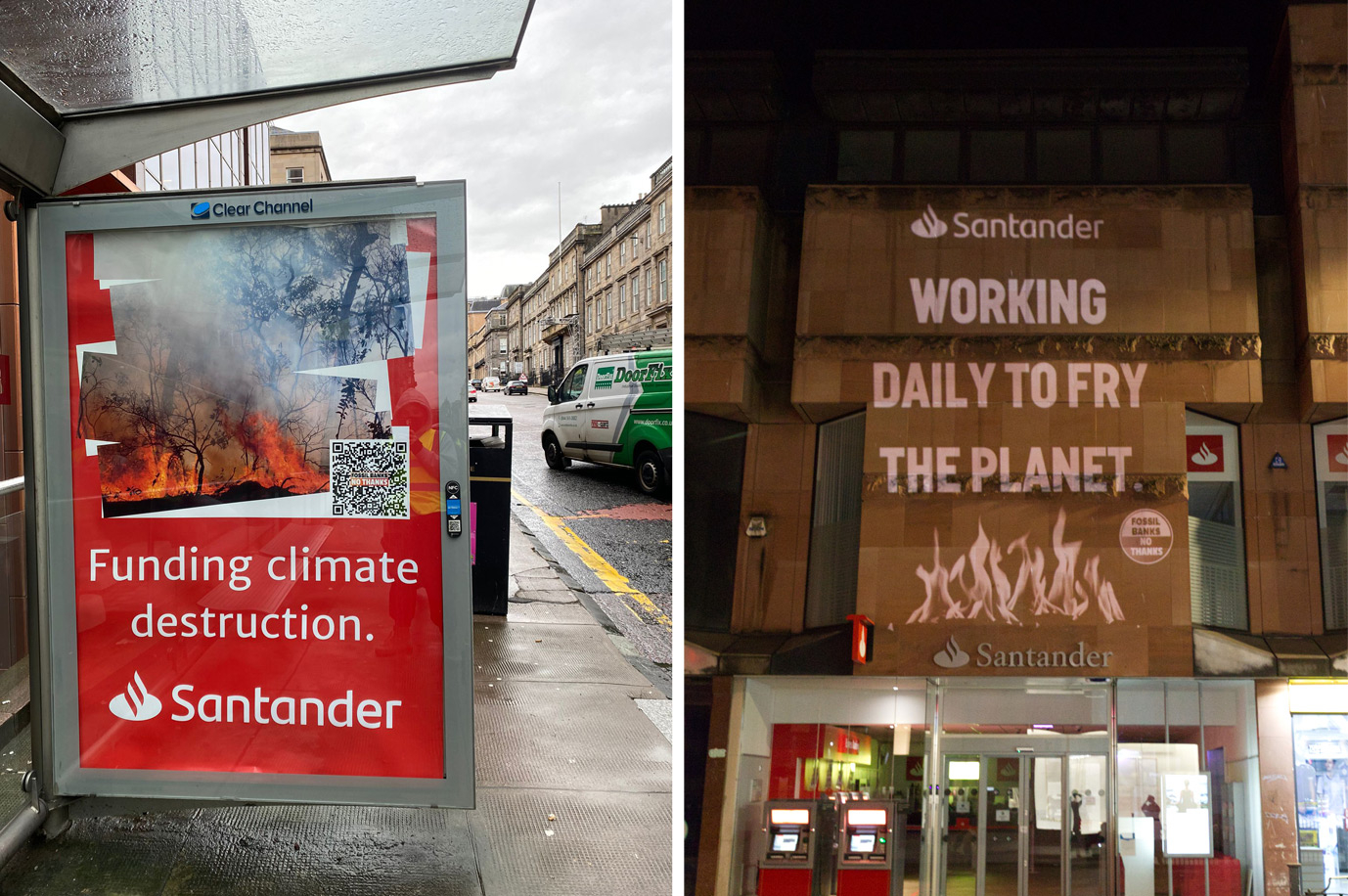 Poster at a bus stop in Glasgow (left) and Projection on Santander's office in Glasgow (right).
Photo:

Just a few days later, Extinction Rebellion protesters shut down the street outside JP Morgan in Glasgow city centre, highlighting the bank’s position as the world’s foremost fossil financier. Reclaim Finance published an analysis criticizing the Glasgow Financial Alliance for Net Zero (GFANZ) for failing both to address fossil fuel expansion and to enact reductions in absolute emissions. The report called into question the strategy being pursued by GFANZ, which requires its members to follow the UN’s “Race to Zero'' campaign criteria, which do not even mention fossil fuels.

Fossil finance campaigners protested outside of a private drinks reception for GFANZ members, rolling a "Code Red" banner onto the road and letting members know that there is no Net Zero without moving out of fossil fuels.

Halfway through the first week of COP26, Market Forces put up posters on a Barclays branch in Glasgow’s Southside, drawing attention to the bank’s position as UK’s number one financier of fossil fuels in 2021. This came after the group “celebrated” Barclays winning this ‘Race to Disaster’ outside a Barclays branch in the city centre. 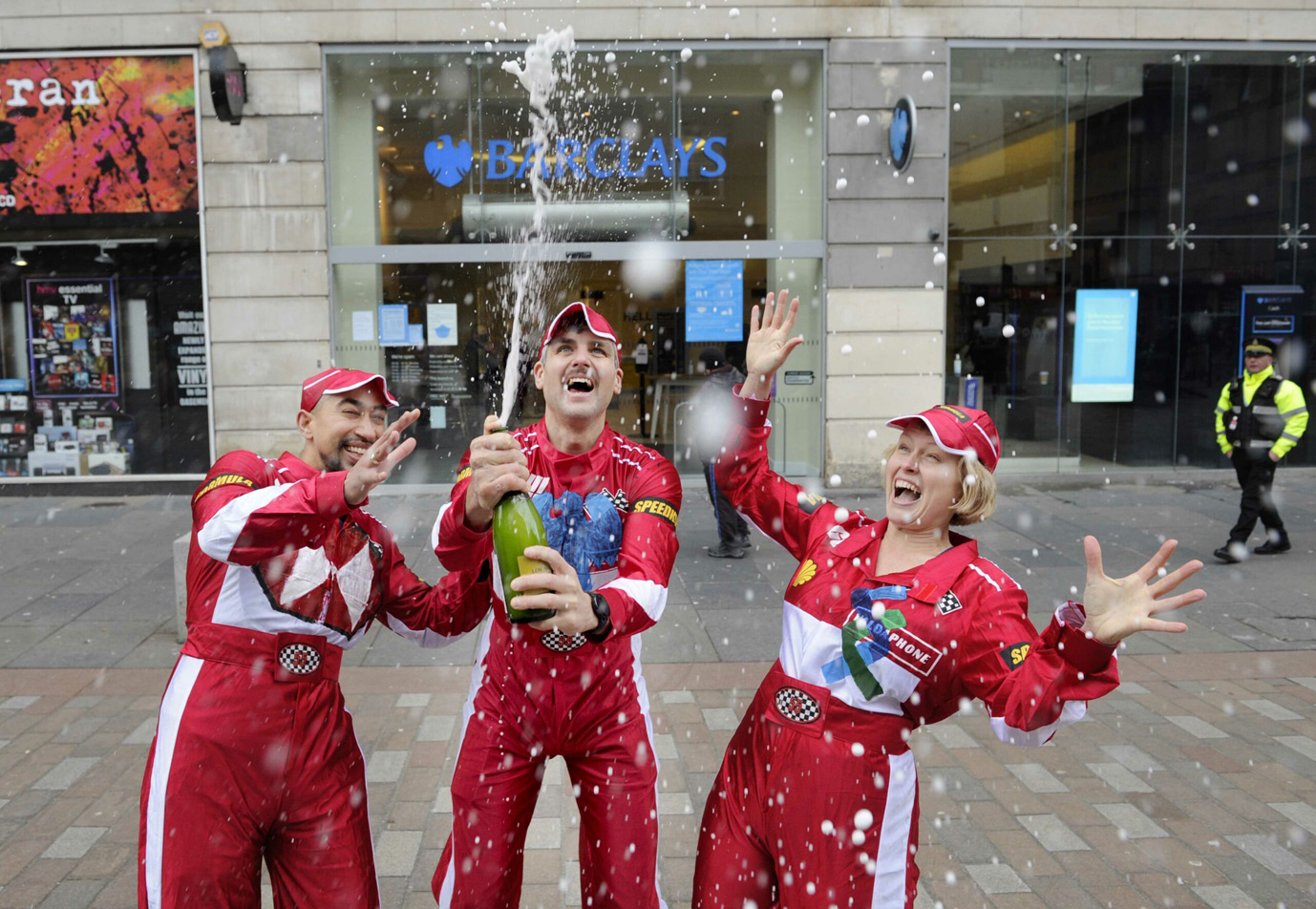 The end of the first week of COP26 saw two major climate protests in Glasgow. On Friday the FBNT crew joined the Fridays For Future climate march, with one day later joining the 100.000 strong crowd that gathered in Glasgow for the Global Climate March. BankTrack was also present at the Global Climate March in Amsterdam carrying a banner demanding ING to stop financing oil and gas. In between the climate marches, Henrieke joined a panel discussion about fossil fuel exploration in new frontiers on behalf of BankTrack at COP. 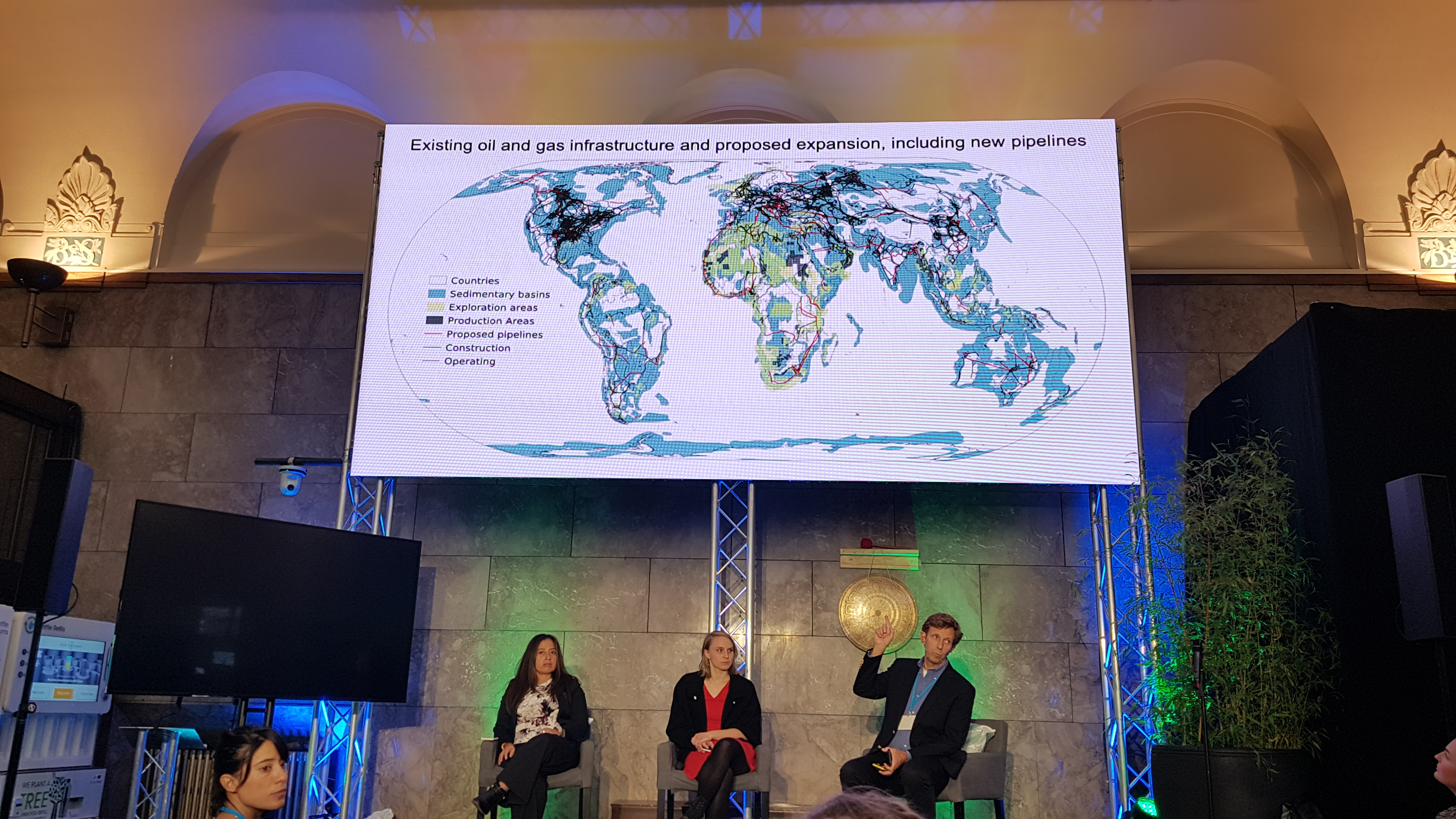 BankTrack carrying the ING banner as part of the finance block during the Climate March in Amsterdam (left) and Fossil Banks No Thanks joined the School Strike for Climate March in Glasgow (right).
Photo:

In the second week, Fossil Banks No Thanks, Glasgow Calls Out Polluters and Glasgow University students disrupted an event on gender and climate, whose panelists included Mizuho Bank’s CEO and a director of NatWest. The activists stood at the front of the live-streamed event and delivered speeches on Mizuho’s financing of the Coastal GasLink and Mozambique LNG projects, as well as NatWest’s fossil fuel financing.

Indigenous leaders led a rally outside the Glasgow offices of JP Morgan Chase on 10 November, calling on the bank to end financing of fossil fuel projects violating Indigenous rights across the Americas. Speakers especially drew attention to the bank’s links to the Coastal GasLink pipeline, which threatens First Nation lands in Canada.

On Thursday, campaigners staged a joint action in support of the Stop EACOP and Stop Cambo campaigns. Speeches highlighted the need for banks to cut their funding for Siccar Point Energy and Shell (the owners of the Cambo oil field) as well as Total Energies and CNOOC (developers of EACOP).  On Friday BankTrackjoined the delegates that walked out of COP26, an action led by the Indigenous Constituency over their frustration about climate inaction. 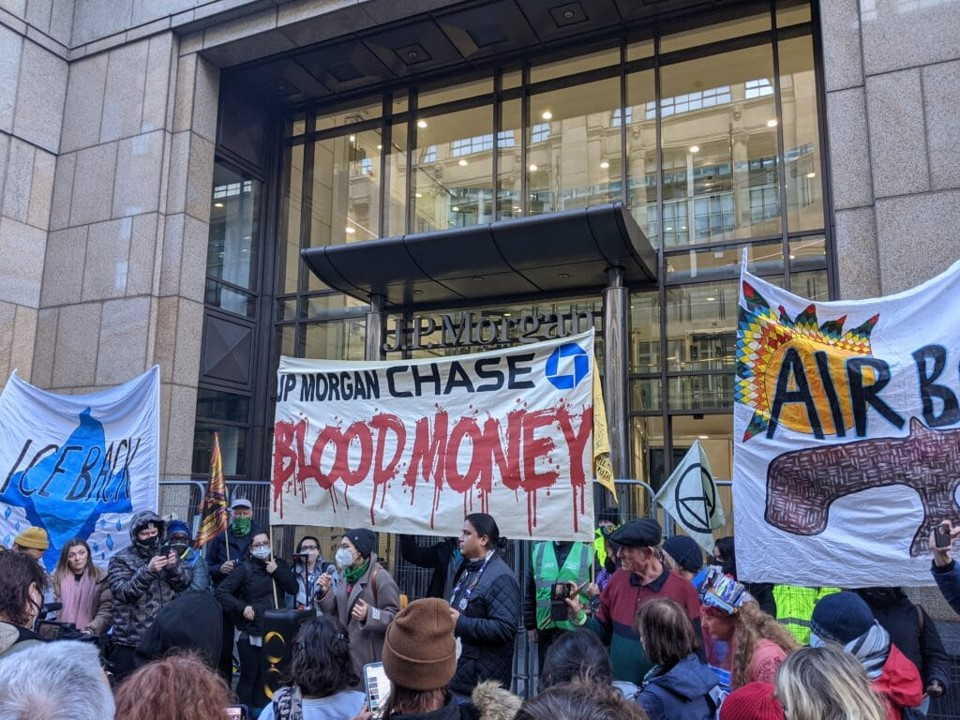 With COP26 behind us, it’s as clear as ever before that banks must act urgently to help achieve the goal of limiting global warming to 1.5 C. Activists around the world will therefore continue to pressure banks to take action on climate and end their financing of the fossil fuel industry.

Are you with an organisation that campaigns to stop bank financing for fossil fuels? Sign our Global Call on Banks!