Home › Blog
What the war in Ukraine teaches us
Lessons for European governments, companies and financiers - a Profundo Expert View
By: Jan Willem van Gelder - Profundo
2022-03-04 Share this page: 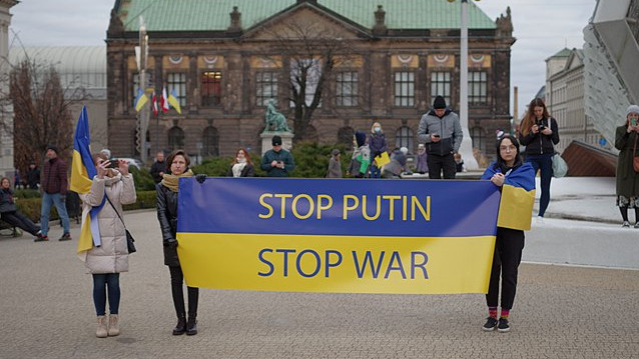 The war in Ukraine is met with firm responses by European governments and companies alike, willing to stand up in defense of human lives. While this is encouraging, this Expert View shows that the political and investment decisions of European governments, companies, banks and investors have played a crucial role in building up Putin’s economic and military power. Also, one would have wished that Europe responded similarly to other terrible conflicts in recent years and that it would have taken the enormous humanitarian threat of climate change more seriously. This Expert View therefore formulates lessons for European governments, companies and financiers, to strengthen their newly found ability to collectively address the present and future humanitarian crises.

European responses to the Russian invasion in Ukraine, which is creating more human suffering and displaced people every day, are both encouraging and coming much too late. It is encouraging that European governments are firm in their condemnation of the military invasion, imposing sanctions and offering support to Ukrainians fleeing the country. It is similarly encouraging that big companies like BP and Shell pull out of their huge Russian joint-ventures and that big investors like the Norwegian Government Pension Fund and ABP divest from all Russian sovereign bonds and equities.

At the same time, however, all these firm steps should not let us forget the crucial role that European commercial and financial interests have played in building up Putin’s economic and military power. Countering his aggression now requires a very dangerous military escalation and excessively strong sanctions. While these sanctions will hurt Russian economic interests and the political elite around Putin, they will be disproportionally felt by ordinary Russians who have not chosen for this war and whose opposition against it is violently suppressed. European sanctions are punishing Russian citizens for the acts of their authoritarian leader, who has always been supported by Europe.

Europe has a fair share of responsibility in the making of this crisis, because of decades of economic, financial and moral support for the Russian regime by European political and corporate actors, more than their peers from the United States, Japan, China and elsewhere. Putin’s continuous violations of humanitarian, ethical and juridical principles over the past decades did not outweigh the abundant oil, gas and coal reserves he had to offer. Nothing has stopped European companies, banks and investors from financing the Russian fossil fuel sector, the Russian government and - indirectly - the Russian production of (nuclear) weapons. Not the suppression of Alexei Navalny and other opposition voices in Russia, nor the NGO campaigns calling for nuclear disarmament, nor the environmental devastation caused by the Russian oil industry, nor the destruction of livelihoods of local communities around the oil & gas fields and coal mines. Evidence brought forward again and again by civil society on the destructive social and environmental consequences Shell’s huge investments in the Sakhalin LNG project in the far east of Russia - from which Shell now finally is divesting - has been ignored by the oil company and its financiers for more than 20 years.

Even Russia’s track record of military interventions abroad did not deter European companies and financiers. Not Russia’s invasion in Georgia in 2008, nor the annexation of the Crimean Peninsula in 2014, nor the bombing of Syrian civilians by Putin’s aircrafts from 2015 onwards. That the war in Ukraine had to be the final straw which finally changes European positions is therefore not just encouraging - it is also much overdue.

Only now European governments and consumers have started to realise how dependent they are on Russian fossil fuels, especially gas, as prices are skyrocketing. But it is too easy to blame Putin, or the gas-hunger of European gas consumers and companies for this dependency. European governments have failed to lead the way towards investing in a renewable energy infrastructure for Europe. Big European fossil fuel companies supplied their Russian partners the technologies needed to extract oil, gas and coal reserves in the harsh but vulnerable Russian ecosystems, often covered by permafrost, and to transport these fossil fuels to markets in Europe, thousands of kilometres away. European banks and investors have fuelled the Russian oil and gas industry with trillions of euros, financing all steps in the value chain, from exploration and production to pipelines and other infrastructure needed for storage and transportation.

The following figures show the main European banks who financed the Russian oil & gas and coal sectors in the five years which have passed since the Paris Climate Agreement: 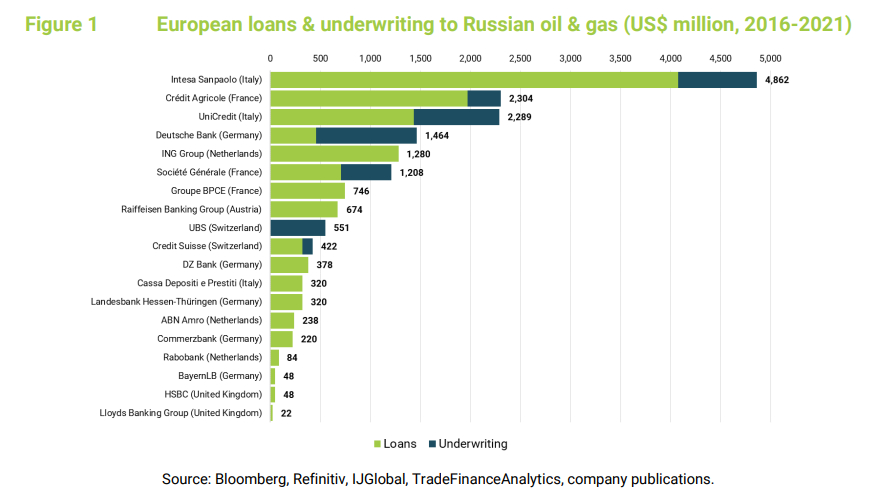 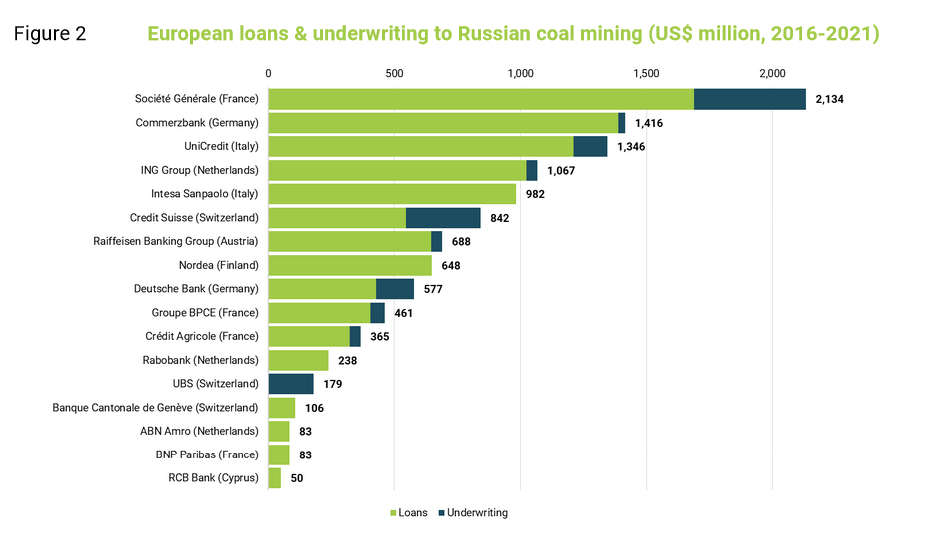 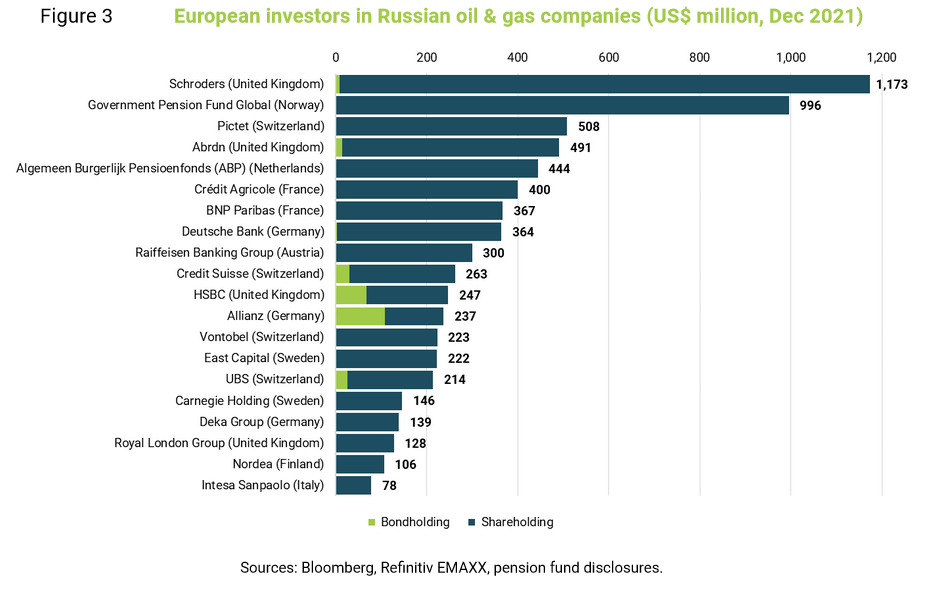 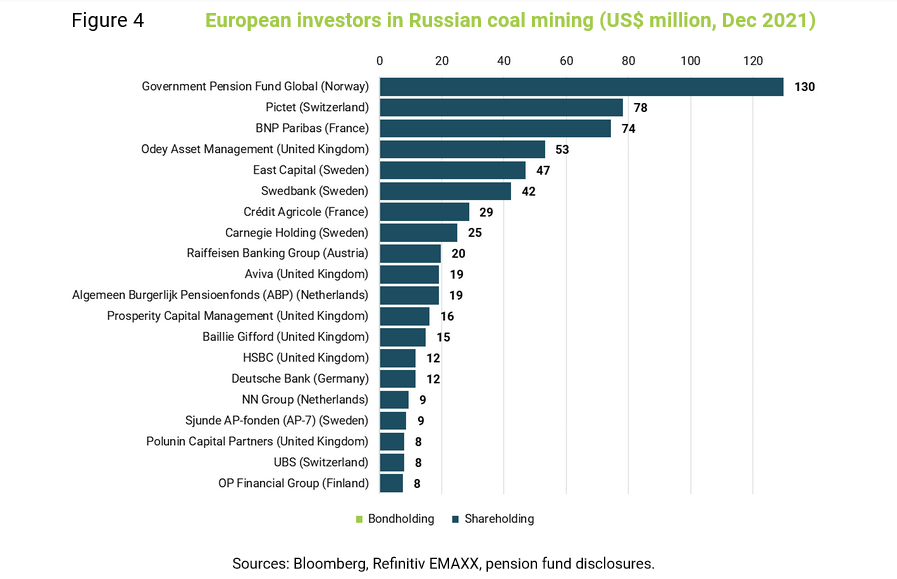 In the meantime, European banks and investors neglected investments in renewable energy. For instance, at the end of 2020, 88% (EUR 34.3 billion) of the total investments of Dutch banks, insurers and pension funds in the energy sector went to coal, oil and gas. Between 2018 and 2020, 69% (EUR 9.1 billion) of Dutch bank loans to the energy sector were attributable to fossil fuels. Even the International Energy Agency, for long the most prominent advocate of the fossil fuel industry, in a recent report concluded that the world “does not need new fossil fuel projects” if we want to meet the goals of the Paris Climate Agreement.
Next to financing the Russian fossil fuel sector, many European investors, such as pension funds, insurance companies and asset managers, have also invested in Russian government bonds (see Figure 5). The proceeds of these bonds are directly used to finance all Russian government expenses, including the huge amounts spent on the army, weapon production and the maintenance of nuclear weapons. 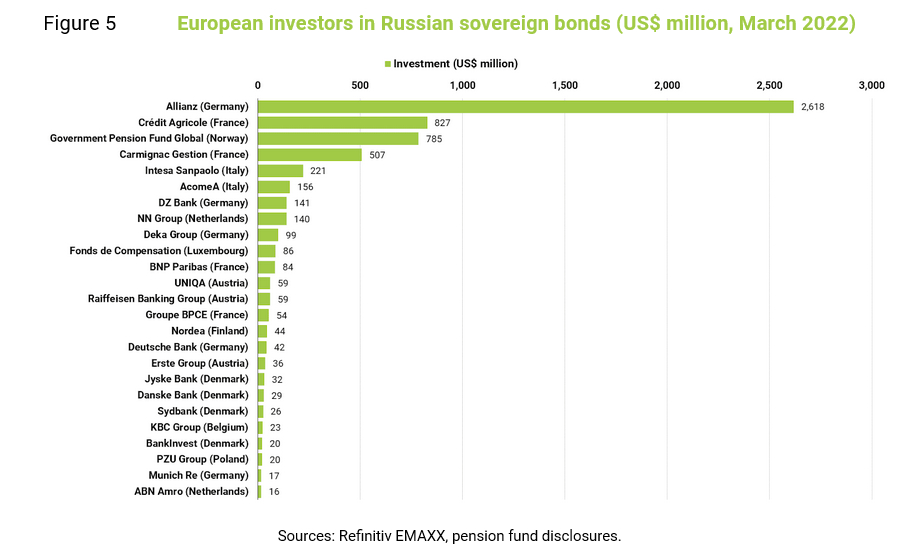 Noteworthy is also that European support for the Russian economy, and thereby for Putin’s military power, was orchestrated to a large extent by the tax advisers and trust offices in Amsterdam’s financial centre. Marketing the favourable tax regulations in the Netherlands and its unprecedented international network of tax treaties, these tax advisers helped Russian companies and oligarchs to set up hundreds of letterbox-companies. These financing vehicles (see Table 1) are used for issuing corporate bonds on the international capital markets, attracting syndicated loans from international bank syndicates and to avoid taxes on dividend and interest flows. 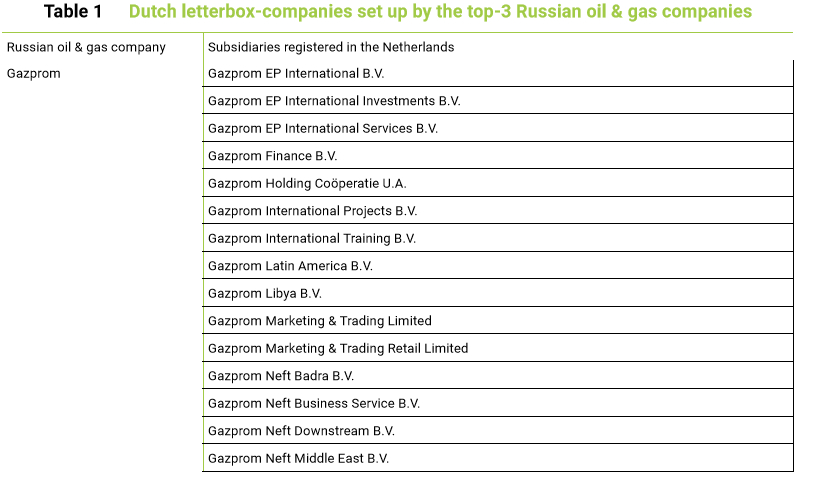 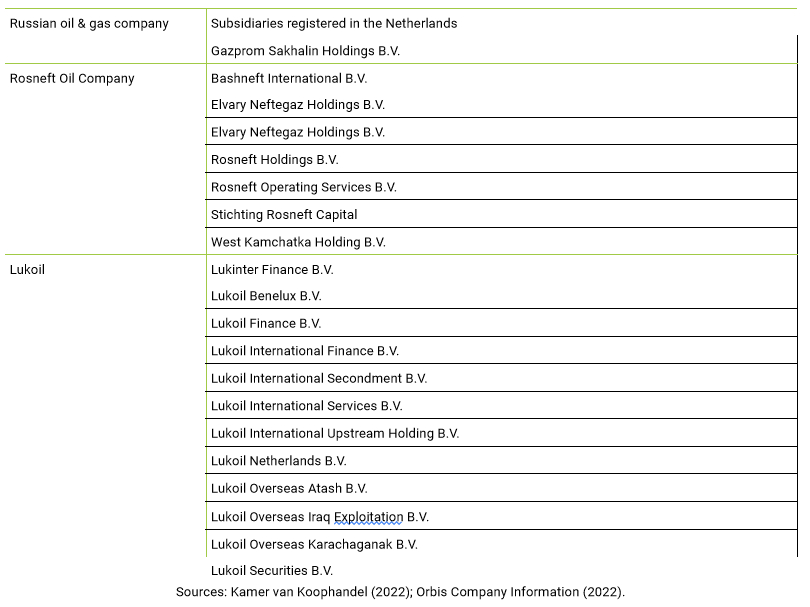 If European governments, companies and investors had cared earlier about the ethical principles they have discovered since the invasion in Ukraine and if they had taken the fight against climate change seriously since the Rio Declaration of 1992, they would have prioritised investments in renewable energy. They had the means and the responsibility to ensure that Europe would have been fully self-sufficient with renewable energy by now.
Prioritising renewable alternatives would not only have avoided the building up of Russia’s economic and military power which Europe now tries to counter by imposing severe sanctions. It would also have played an important role in mitigating global climate change. This week the Intergovernmental Panel on Climate Change released a new report concluding that humans and nature are being pushed beyond their abilities to adapt. Droughts, fires, storms, floods and other types of extreme weather will threaten the livelihoods of over 40% of the world's population in the coming decades. This will drive human displacements to a level that will dwarf what we see happening now in Ukraine.

Why this war evokes different responses

Indeed, the first European responses to the aggressive Russian attack on Ukraine are encouraging. But one would only wish that Europe had responded in the same way to similar events in recent years, which also evoked great suffering and hardship for ordinary citizens. Just remember how the Syrian president Assad with Russian military support bombed his own population only a few years ago, as one example of a long list of terrible conflicts, often related to fossil fuels and other resources, which took place in the past decades. European responses, by governments, corporates, banks and investors, overall have been quite weak to such conflicts. Economic interests prevailed over humanitarian and juridical concerns. Europe reacted with weak sanctions or none at all, and hardly any company or financier divested. The people fleeing these conflicts are still left to drown in the Mediterranean, pushed back at European borders or faced with malfunctioning European asylum systems.
Now that Russian tanks are ready to roll through the streets of Kyiv, with the risk of an escalation of the conflict to other European countries, the European attitude is different. Governments are offering military support and welcome displaced people, companies withdraw, and investors divest. Because there is one major difference between Putin and Assad: Putin is threatening European lives and interests, Assad was not. Syrian lives were not worth it.

What European actors could learn

The current events in Ukraine could be a wake-up call and strengthen the call for government policies based on human rights and sustainability principles and a new, sincere wave of Corporate Social Responsibility (CSR) in the corporate and financial world. In this light, the steps taken in the past week can be seen as a precedent and as a sign that European actors are able to act together to address the different crises we are in. This gives civil society hope and more legitimacy than ever to demand prompt actions from different European stakeholders, in particular:

Since the Russian invasion, European political, corporate and financial actors have shown that they are prepared to stand together and take meaningful steps to defend the lives of ordinary citizens. It is deeply saddening that a devastating war in Europe was necessary to make this happen, but it does show the potential for all European actors to act collectively to address the present and future humanitarian crises. Let’s make sure that all steps they take from now will put human lives first.

This Profundo Expert View was originally published on Profundo's website and is republished here with permission. The original can be accessed here.