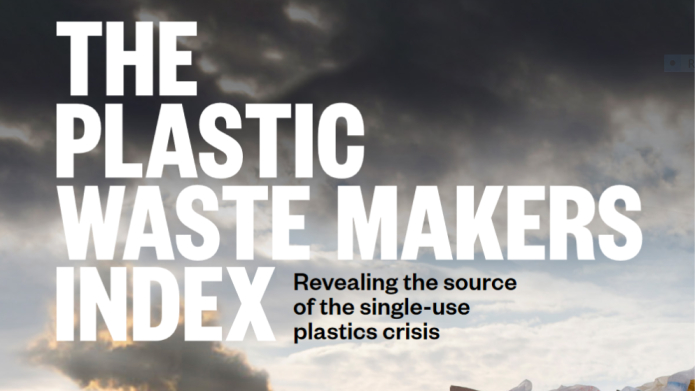 Analysis released today reveals the source and true scale of the global plastic waste crisis. It shows just 20 companies – supported by a small group of financial backers – are responsible for producing over 50 per cent of ‘throwaway’ single-use plastic that ends up as waste worldwide (1). Published by Minderoo Foundation, the ‘Plastic Waste Makers Index’ has been developed with partners including Wood Mackenzie, and experts from the London School of Economics and Stockholm Environment Institute among others (2).

Made almost exclusively from fossil fuels, single-use plastics are the most commonly discarded type of plastic, too frequently becoming pollution. Environmental campaigners have previously placed the blame for plastic waste at the feet of packaged goods brands such as PepsiCo and Coca-Cola. But now a small group of petrochemical companies who manufacture ‘polymers’ – the building block of plastics – is revealed as the source of the crisis:

“The plastification of our oceans and the warming of our planet are amongst the greatest threats humanity and nature have ever confronted,” explains Dr Andrew Forrest AO, Chairman and Co-Founder, Minderoo Foundation. “Global efforts will not be enough to reverse this crisis unless government, business and financial leaders act in our children’s and grandchildren’s interests.

“This means: stop making new plastic and start using recycled plastic waste, it means re-allocate capital from virgin producers to those using recycled materials, and importantly, it means redesign plastic so it does no harm and is compostable, so like every other element, it returns to its original molecules, not nano-plastics. And we must act now. Because while we bicker, the oceans are getting trashed with plastic and the environment is getting destroyed by global warming,” Dr Forrest said.

“Tracing the root causes of the plastic waste crisis empowers us to help solve it,” adds Al Gore, former US Vice President. “The trajectories of the climate crisis and the plastic waste crisis are strikingly similar and increasingly intertwined. As awareness of the toll of plastic pollution has grown, the petrochemical industry has told us it’s our own fault and has directed attention toward behavior change from end-users of these products, rather than addressing the problem at its source.”

Minderoo Foundation, author of the report, is calling for:

Scale of inaction and growing crisis

The report also lays bare the scale of inaction by plastic producers and how they are compounding the existing throwaway plastic waste crisis:

“Our reliance on oil and gas is not only fuelling climate change, but as the primary material used in the production of throwaway plastics is also devastating our oceans,” explains Sam Fankhauser, Professor of Climate Change Economics and Policy at the Smith School, University of Oxford and Former Director, Grantham Research Institute on Climate Change and the Environment, London School of Economics.

“It is critically important petrochemical companies move towards circular-economy-based alternatives if we are going to successfully tackle these interlinked crises. The benefits on offer are transformative and hugely beneficial not only for our environment and ecosystems, but also the communities living with the realities of plastic pollution.”

“This is the first-time the financial and material flows of single-use plastic production have been mapped globally and traced back to their source,” said Toby Gardner, Senior Research Fellow, Stockholm Environment Institute. “Revealing the sheer scale of the global crisis we have on our hands, its critical we break the pattern of inaction. You can’t manage what you can’t measure. Building on the analysis published today, this is why it is so important the small group of companies and banks that dominate global production of throwaway plastics begin to disclose their own data.”

More than 130 million metric tonnes of single-use plastic ended up as waste in 2019 – almost all of which is burned, buried in landfill, or discarded directly into the environment. Nineteen pre cent of this waste – some 25 million metric tonnes – became pollution, dumped in oceans or on land (3). This is equivalent to the weight of over 23,000 blue whales, signifying the scale of the crisis, which is already having devastating ecological, social and environmental consequences.

The Plastic Waste-Makers Index is a project of Minderoo Foundation’s No Plastic Waste initiative, which aims to create a world without plastic pollution – a truly circular plastics economy, where fossil fuels are no longer used to produce plastics.

1. Download the report here.
2. A full list of the analytical partners contributing the analysis include: Wood Mackenzie, Planet Tracker, Profundo and Neural Alpha. Academics from the Grantham Research Institute on Climate Change and the Environment, London School of Economics, and Stockholm Environment Institute also contributed to development of analysis and the report. KPMG undertook limited assurance of the methods and results presented.
3. Pew Charitable Trusts and SYSTEMIQ 2020, Breaking the Plastic Wave, (p25).