Home › News
Indigenous Groups Lead Movement to Call on Banks to Drop Enbridge’s Controversial Line 3 Pipeline
Tribal Nations based in Minnesota oppose the project and the Minnesota Department of Commerce has condemned it
By: Honor the Earth & Rainforest Action Network
2017-09-21
Minneapolis, MN
Contact: 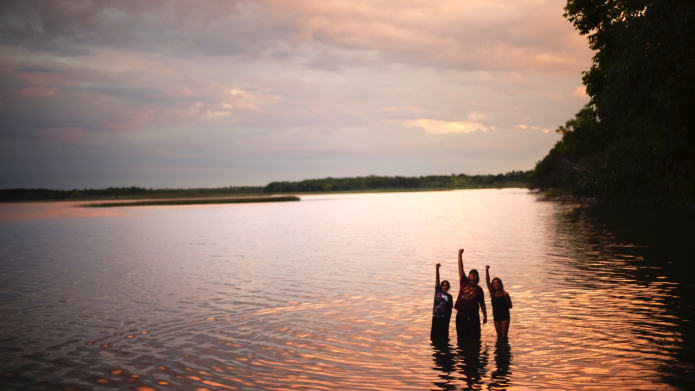 Today, a coalition of Indigenous, national and international groups join a growing movement placing pressure on financial institutions to drop financially and socially risky projects, delivering a group letter to the 36 banks providing corporate finance to fossil fuel infrastructure giant Enbridge. The groups are calling on the banks to cut business ties with Enbridge Inc. until it stops expanding tar sands operations, one of the most destructive fossil fuels on the planet. Enbridge is the company behind the Line 3 “Replacement” Pipeline project, a controversial project that would cause Indigenous rights abuses and continued contributions towards climate change.

The Line 3 so-called “Replacement” Project is the largest project in Enbridge’s history. The proposal calls for a new pipeline in a new route that would cover over 1,000 miles (1,660 km) from Hardisty, Alberta to Superior, Wisconsin, transporting an average of 760,000 barrels of crude oil from the Alberta tar sands each day, with a capacity of 844,000 barrels per day. The proposed route would pierce the heart of the 1855 Treaty territory, where members of signatory Ojibwe bands retain the rights to hunt, fish, harvest wild rice, perform religious ceremonies, and travel.

“We already saw what happens when a fossil fuel company forces through its project without the consent of directly impacted Native nations -- the opposition against the Dakota Access pipeline sparked worldwide attention, as did the many human rights violations committed upon peaceful demonstrators,” said Tara Houska, National Campaigns Director of Honor the Earth.

First Nations and Indigenous tribes oppose tar sands mining at the source and throughout the pipeline route. Tribal Nations based in Minnesota have joined over 150 First Nations in Canada that are party to the Treaty Alliance Against Tar Sands Expansion.

Tar sands have destroyed forest lands, decimated wild bison populations and increased climate change emissions through mining, transporting and refining processes. Any new pipeline infrastructure, such as the Line 3 “Replacement”, will facilitate new tar sands production — expanded extraction that is incompatible with Canada’s climate commitments and the goals of the Paris Climate Agreement.

This particular project puts sensitive wetlands, watersheds, and treaty rights at risk in Minnesota. The Ojibwe people have guaranteed rights to hunt, fish, and gather wild rice in their traditional territories. A spill would devastate the area, and has the potential to wipe out wild rice beds along its path, one of the most central components of Ojibwe culture and identity.

“Major fossil fuel infrastructure projects like this one require outside funding to be completed, giving banks an outsized role to play in shaping our collective climate future,” said Ruth Breech with Rainforest Action Network. “For too long financial institutions have escaped accountability for the real world consequences of their investments, the time for that impunity has come to an end.”

As a result of the controversy around the project, banks involved in Dakota Access Pipeline have taken steps such as selling their shares in the project finance loan, stopping new business with the pipeline owner, and publicly acknowledging regret over financing the project. The Minnesota Department of Commerce recently condemned the Line 3 Replacement Project, deeming it unnecessary. Banks that finance Enbridge have an upcoming decision in October to decide if they will renew a $1.48 billion line of credit.

Despite the fact that Minnesota has not finalized the legal, public or environmental permitting process for Line 3, Enbridge has already started construction in Canada and Wisconsin. Construction on the 14-mile stretch of the pipeline in Wisconsin has already sparked protests and arrests that are ongoing.

Houska continued, “Enbridge is a 28% shareholder in DAPL. Clearly the company did not learn its lesson, as it is poised to build its Line 3 Project against the will of numerous impacted tribes along its new route. Banks depend on their customers -- we must have agency in how our money is invested. Stop investing in unnecessary, destructive fossil fuel projects and start investing in a green future for the betterment of us all.”