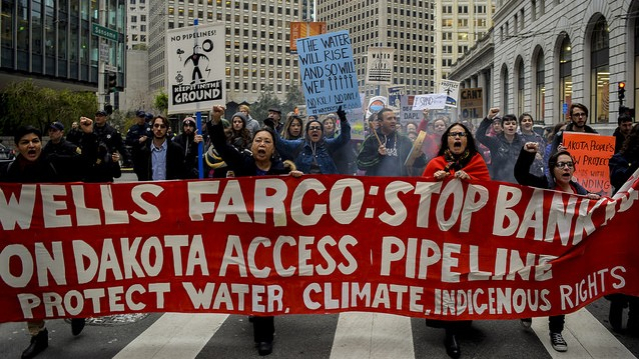 Just like a homeowner might refinance their mortgage, when a company refinances its debt, it can replace its agreement with the banks with a new deal that may prove more favorable to the company, or extend the length of the deal.

So, this was a test for the big banks, to see if they’ve learned any lessons after all the criticism they got for funding DAPL and Energy Transfer. Did they start cutting ties with the company? Or did they get right back in line to keep funding egregious human rights abuses?

Five banks that were previously on Energy Transfer Equity’s revolving credit did the right thing, and chose not to support ETE’s new credit:

This means that ING is following through on its March 21 commitment to “stop doing any new business with the companies, not renewing credit facilities that expire, effectively ending the relationship.” Both ING and DNB have sold off their stakes in the project finance loan that actually built DAPL -- but this move shows that they understand the risks of staying involved with the companies.

On the other hand, four banks did the opposite -- where previously they weren’t on ETE’s line of credit, in March they decided to bankroll the company:

Public Pressure Works
DNB, ING, and Intesa Sanpaolo were all part of the 17 banks directly funding DAPL -- so their backing away from the company behind the project is a good indication that they felt the heat and learned their lesson.

TD Bank hasn’t learned the same lesson -- and in fact, TD and two of their Canadian peer banks are showing that they do not care about the track record of their clients. At the same time, TD is doubling down on projects that kill the climate and trample Indigenous rights by taking on a lead arranger role for Kinder Morgan’s Trans Mountain tar sands pipeline.

Meanwhile, banks like Citi, JPMorgan Chase, and Wells Fargo continue to fund Energy Transfer, without taking this opportunity to exit the relationship. With the intense criticism Citi and Wells Fargo got for funding DAPL, these banks have tried to reassure the public that they really do care about Indigenous human rights -- but they haven’t put their money where their mouth is.

That’s why we’re calling for a week of action targeting Citi, JPMorgan Chase, Wells Fargo, and TD Bank -- not only for supporting the companies behind DAPL, but also for not learning their lesson -- as all of these banks are also bankrolling TransCanada, the company behind the Keystone XL tar sands pipeline.

• Banks that made new commitments to Energy Transfer Equity in March 2017.