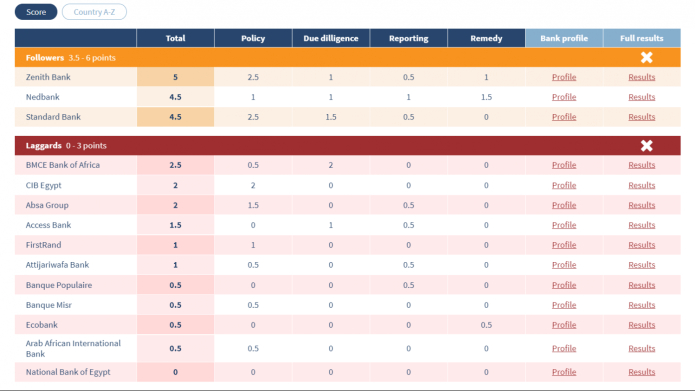 View the full table of results below. Photo: BankTrack

A benchmark of the human rights policies and processes of African banks finds that, out of 14 large banks headquartered in Africa, only four have made a clear commitment to respect human rights. None of the banks covered have a clear human rights due diligence process in place or publish detailed human rights reporting. The benchmark evaluates banks against a set of 14 criteria based on the requirements of the UN Guiding Principles on Business and Human Rights (‘the Guiding Principles’), endorsed by the UN Human Rights Council in 2011.

Nigeria’s Zenith Bank led the ranking of the 14 African banks, with a score of 5 points out of a possible 14. When contacted by BankTrack, Zenith Bank sent a previously unpublished Human Rights Policy, adopted in 2016, and consented to this being published on the BankTrack website. This led to the bank improving its score from 0.5 points to 5 points. Under the policy, the bank commits to respect human rights and sets out a process of human rights due diligence which extends to the companies and projects it finances.

Zenith was closely followed by South Africa’s Standard Bank and Nedbank, both of which scored 4.5. (1) All three banks are ranked as “followers”. The remaining 11 banks were ranked as “laggards” in the benchmark, scoring 3 points or less. Of these, ABSA Bank of South Africa was the only other bank with a commitment to respect human rights.

No banks were ranked in the “front runners” and “leaders” categories, which are reserved for banks scoring more than 6 points and more than 9 points out of 14. In BankTrack’s international 2019 benchmark, 40 out of 50 banks were ranked as “laggards” or “followers”, with only one “leader”, ABN AMRO, identified.

The criteria examine four aspects of banks’ implementation of the Guiding Principles: their overall policy commitment on human rights, human rights due diligence (HRDD) process, reporting on human rights and their approach to access to remedy. It does not evaluate banks’ actual financing for companies and projects with adverse human rights impacts. The new benchmark follows the same methodology as BankTrack’s 2019 Human Rights Benchmark, which assessed 50 global banks against the same criteria.

Four banks improved their final scores by providing additional information when contacted with draft scores, including two banks – Zenith and Morocco’s BMCE Bank - which shared previously unpublished policy documents or descriptions of due diligence processes. BMCE Bank of Africa responded providing details of elements of a human rights due diligence process. Although this was limited to finance for “investment projects", missing impacts arising from general corporate finance as well as other aspects of the bank’s business, this was sufficient to improve its score from 0 to 2.5.

Principles are a weak driver of policies

The 14 banks were selected for the benchmark either due to their size or their status as signatories to voluntary banking sector commitments. They included the ten largest banks headquartered in Africa, alongside the four African banks that are signatories to both the Equator Principles (a bank-led risk management framework for financing large infrastructure projects) and the Principles for Responsible Banking (PRBs; a newer set of principles focused on alignment with the Paris Climate Agreement and Sustainable Development Goals). Of the two highest-scoring banks, Zenith Bank is a PRB signatory and Nedbank is an Equator signatory.

In all, seven of the 14 banks are signed up to both sets of Principles: Standard Bank, FirstRand, Absa Group, BMCE Bank of Africa, Ecobank, Arab African International Bank and Access Bank. All of these banks except Standard Bank scored as laggards and lacked human rights policies (although Absa Bank has a code of ethics which includes a commitment to respect human rights). This suggests that adopting these voluntary sector initiatives, which both contain strong language on respecting human rights, is not currently driving stronger human rights policies and processes.

On a global scale, Africa’s banks are small, with less than 1% of total world bank capital compared to 47% for Asia, 25% for Europe and 19% for North America, according to The Banker. However, according to the same source, the region’s banking sector is seen as having significant potential for growth, with international banks having pulled back from the continent since the financial crisis.

African banks are also not seen as frequent financiers of the most problematic projects and companies, with only three of the 13 (Absa Bank, Nedbank and Attijariwafa) being linked to active Dodgy Deal profiles on the BankTrack database. However several problematic and high-profile fossil fuel projects in the region have courted or received support from African financiers, including LNG developments in Mozambique, the recently-cancelled Thabametsi coal power plant in South Africa, and the East African Crude Oil Pipeline (EACOP) in Uganda and Tanzania.

The benchmark comes as measures to require companies to adopt human rights due diligence gain ground, particularly in Europe. BankTrack’s previous Human Rights Benchmark of 2019 found slow progress among international banks towards implementing the requirements of the UNGPs, particularly around remedy and reporting, and recommended action from regulators to address this.

The Business and Human Rights Resource Centre has argued that African countries should not wait for other countries before looking at the introduction of mandatory human rights due diligence.

Joseph Kibugu, Eastern Africa Senior Researcher at the Business and Human Rights Resource Centre, commented: “The human rights footprint attributed to financial institutions in Africa, either directly or indirectly, cannot be ignored. Worryingly, the survey by BankTrack reveals that banks are yet to embrace human rights practices even at this age where there is consensus about their responsibility to respect human rights. This gap calls for states to step up and mandate human rights due diligence especially for businesses like the banking sector that are in a position to influence companies respect for human rights if they do the right thing, and  undermine the rights of individuals and communities if they are negligent about their impacts.”

Ryan Brightwell, Human Rights Campaign Coordinator at BankTrack, commented: “This research marks the first time that most of these banks’ human rights policies and processes have come under international scrutiny, and it is hardly surprising to find they are under-developed – as is the case for most private sector banks globally. This is further evidence that the traction of the UN Guiding Principles ten years on is still too limited. Requirements for human rights due diligence need to be underpinned by legislation ensuring that affected people can seek remedy through the courts.”