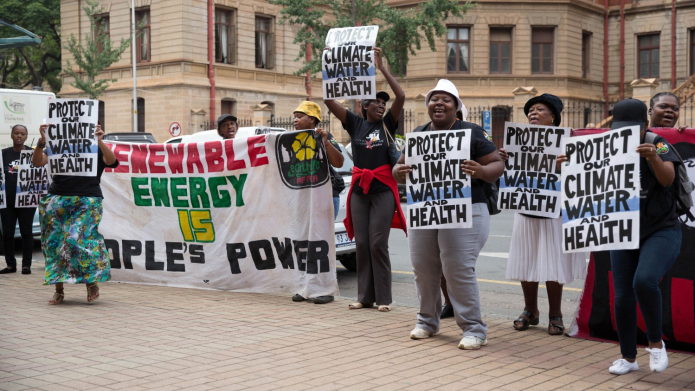 The plant poses severe risks to local communities' water security and will be one of the most emissions-intensive coal-fired power stations in the world. The plant is expected to be operational in 2021 and is planned to cost USD 2 billion.

Marubeni to pull out of Thabametsi coal power plant

The devastating local and global environmental impact of coal-fired power plants has been well established. The Paris Climate Agreement goals require a managed decline of fossil fuel production, and the construction of new coal fired power plants is not compatible with this. Banks should avoid any involvement in this dodgy deal as part of a move to stop financing new coal-fired power plant developments anywhere in the world.

Coal-fired power stations are water-intensive, a major concern in water-scarce South Africa. The plant’s climate change impact assessment shows that water availability and deteriorating water quality in the already water-stressed Lephalale area pose a high risk to the power station’s operation over its intended 30 year lifespan, especially because planned industrial expansion in the area will make water increasingly scarce (Mining Review). The assessment mentioned no means of ensuring that the water availability risks to the power station are avoided. Health impacts of the plant are also likely to be substantial.

A March 2017 report on the health impacts of coal-fired power plants in South Africa concluded that these impacts include early deaths, chronic bronchitis, hospital admissions for respiratory and cardiovascular disease and a variety of minor conditions leading to restrictions on daily activity, including lost productivity.

In addition, as Earthlife Africa commented on the project’s Climate Change Impact Assessment, the social cost of Thabametsi’s greenhouse gas emissions have not been calculated or properly taken into consideration.

Thabametsi is expected to be responsible for the emission of 9.9 million tons of CO2 equivalent each year, for a period of 30 years, the Climate Change Impact Assessment revealed. This will make Thabametsi one of the most greenhouse gas emission intensive coal power plants in the world (according to Mining Review Africa). Energy-related carbon dioxide (CO2) emissions are the majority of global greenhouse gas (GHG) emissions, which are responsible for having major adverse impacts on climate change. The assessment failed to address several other issues, as Earthlife Africa has stated in their comments of July 2017. For instance it did not take into account the external costs of the project's GHG emissions (climate change impacts on human health, water availability) and the impact it will have on local communities. It failed to propose any measures to adequately mitigate the plant’s emissions.

The December 2014 Threat Assessment on air quality by the Department of Environmental Affairs stipulated that, “the greatest potential threat to air quality exists in the Waterberg District Municipality through the planned expansion of energy - based projects and coal mining in the district. The planned development poses a threat to human and environmental health in the region and it poses challenges for air quality management in the region."

A multinational consortium that was building one of South Africa's first privately-owned coal-fired power plants at Thabametsi has asked to withdraw from the project, the energy ministry said on Tuesday (Market Screener).

Marubeni to pull out of Thabametsi coal power plant

Three of the South African commercial banks, Nedbank, Standard Bank and FirstRand, which had been considering financing for Thabametsi have announced that they are withdrawing from the project. See the January 2019 press coverage confirming the withdrawals by Nedbank and Standard Bank here, and by FirstRand here.

The Thabametsi project requires USD 2 billion of finance (partly funded by project finance) and is based on a 75:25 debt-equity ratio.

Three South African commercial banks, Nedbank, Standard Bank and FirstRand, which had been considering financing for Thabametsi have announced that they are withdrawing from the project. See the January 2019 press coverage confirming these withdrawals by Nedbank and Standard Bank, and by FirstRand.

In November 2020, the companies listed below have withdrawn from this project.

Nedbank is moving on coal power, but two plants are stuck on its radar

The South African bank is the first from the Global South to move out of new coal plants, but is still backing Thabametsi and Khanyisa
2018-04-10 | Robyn Hugo - Centre for Environmental Rights, Yann Louvel – BankTrack
blog
external news
our news

Thabametsi coal plant given go ahead despite staggering climate impacts

Thabametsi could be world’s worst polluter

Africa: Earthlife Africa March On the French Consulate to Demand an End to Coal

Threat assessment on air quality of the Waterberg region

The original proposal was for a 600 to 1,200 MW coal plant, to be developed by Exxarro Resources and France's GDF Suez (now Engie) and supplied by Exxaro’s Thabametsi coal mine. Environmental approval for a 1,200 MW coal plant was granted in March 2015. The environmental appproval was appealed by Earthlife Africa. The approval was suspended until the appeal had been decided on.

On May 15, 2015, Earthlife Africa and supporters marched on the French consulate in Johannesburg urging the French government and the French company Engie to divest from coal, starting with Thabametsi. After a sustained public opposition campaign, the CEO of Engie announced on a June 3, 2015 that the company was withdrawing from the project. After Engie's withdrawal, Exxaro said it would press ahead with the coal plant with the Marubeni Corporation of Japan as lead developer. The authorisation issued to Thabametsi Power Project (in which Engie was a shareholder) was transferred to the Thabametsi Power Company (Pty) Ltd.

In March 2017 the North Gauteng High Court in Pretoria, South Africa, ruled in favour of Earthlife Africa, ordering that the minister of environmental affairs must reconsider the appeal after a comprehensive assessment of the plant's climate change impacts has been completed, including a public consultation.