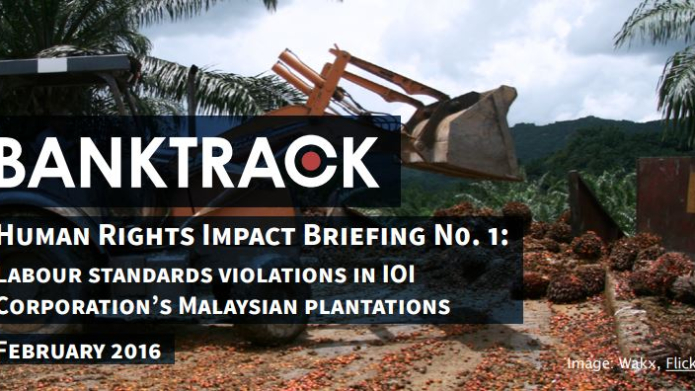 Banks must do more to meet their obligations under UN guidelines to disclose their response to specific human rights impacts linked to their finance. This is the main conclusion of the first in a new series of Human Rights Impact Briefings released by BankTrack today, which assesses the responses of fifteen large commercial banks to evidence of serious labour standards violations by a company they financed, the Malaysian palm oil grower IOI Corporation.

The series of briefings intends to shed light on the extent to which banks are living up to their responsibilities under the UN Guiding Principles, by examining specific instances of human rights violations linked to bank finance, and asking banks to explain how they have responded.

For this first briefing, BankTrack presented banks with existing research by Finnwatch, the Finnish non-governmental organisation focused on global corporate responsibility, which documented how IOI Corporation had blocked foreign workers on their plantations from joining trade unions, withheld their passports - a recognised indicator of forced labour, and failed to pay some workers the minimum wage.

Banks were asked to detail how they had met their responsibilities to seek to prevent or mitigate these impacts. Under the UN Guiding Principles on Business and Human Rights, adopted in 2011, all businesses are required to seek to prevent or mitigate adverse human rights impacts that are directly linked to their operations, products or services by their business relationships. Further, they have a responsibility to account for how they address such human rights impacts by communicating this externally.

While all banks but one responded, half of these did not acknowledge their links to IOI Corporation or discuss the specific impacts raised in the briefing. This is despite the evidence of these financial links being available either publicly or on industry databases to which banks themselves provide information. Four banks cited concerns around customer confidentiality as reasons for not providing further disclosure.

Among the seven banks which did acknowledge their financial links to IOI Corporation, only three said that they had taken some action in response to the impacts outlined, either by engaging with the company or dropping it from funds labelled as "socially responsible".

BankTrack previously benchmarked banks on how they are integrating their responsibilities under the UN Guiding Principles into their policies, processes and reporting. On the basis of this briefing there seems to be no link between the quality of bank policies and the quality of disclosure: banks with good policies on paper showed very poor disclosure, and vice versa.

"The UN Guiding Principles ask businesses, including banks, to account for how they address their human rights impacts, by giving information that is ‘sufficient to evaluate the adequacy of the enterprise's response'. None of the banks we contacted provided information which we would view as meeting this standard - for example, while some banks said they had engaged with IOI Corporation, none of them indicated they had requested specific improvements from the company, or agreed any kind of follow-up plan", said Ryan Brightwell, BankTrack's Human Rights Campaign Coordinator.

The report states; "Meeting the requirements of the UN Guiding Principles, particularly under reporting, will require greater levels of disclosure than have been the norm until now. While banks have a duty to their customers to keep certain commercially sensitive information private, they must square this duty with their responsibility to provide information on how they have responded to particular human rights impacts. If client consent is needed for such disclosures, bank provision of finance should be conditional on such consent being provided."

1. No response: Bank of China