Home › Blog
Five years since the Paris Agreement, are banks' 2050 pledges enough to reign in fossil fuel finance?
How the year's 'Paris-alignment' moves stack up against the measures needed to tackle the climate crisis
By: BankTrack
2020-12-12 Share this page: 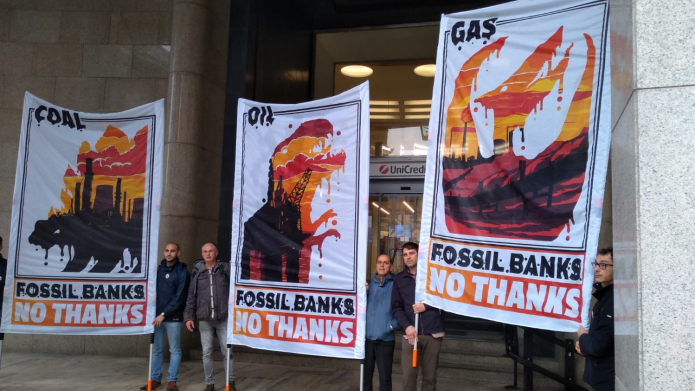 This Saturday, December 12th, will mark five years since the signing of the Paris Climate Agreement; the landmark moment when virtually all countries pledged to keep global warming well below 2℃ above pre-industrial levels and to pursue efforts to limit temperature increase to 1.5℃.

The 2020 Glasgow climate summit (COP26), intended as a “global stock-take” five years on, has been rescheduled for 2021 due to Covid-19, but a virtual “Climate Ambition Summit” will take place this weekend instead.

While commercial bank financing for the fossil fuel industry is not on the agenda, for the Paris climate goals it matters a great deal whether banks will finally start shifting their billions away from the fossil fuel industry, the prime catalyst of the climate crisis. This is why BankTrack and many allies over the last five years have campaigned aggressively for a complete end to this financing.

Given the warning a year ago from Mark Carney (then Bank of England governor, now UN Special Envoy for Climate Action and Finance) that the finance sector was still on course for a disastrous 4℃ world with the policies then in place - what has the financial sector been doing so far about its own ‘climate ambition’, and how does this compare with what needs to be done?

The last twelve months have seen one bank after another release new commitments to align their operations with the Paris Agreement goals, many including ‘net zero by 2050’ commitments. To set out what a fully Paris-aligned policy for financial institutions should look like, a coalition of civil society groups released the Principles for Paris Aligned Financial Institutions in September this year.

Such a policy should of course be guided by a clear understanding of the scale of the challenge. To have a 50/50 chance of staying below 1.5℃, greenhouse gas emissions need to reach effectively zero by 2050, and must be more than halved by 2030 compared to 2010 levels. This means that in the next decade coal, oil, and natural gas emissions need to decline annually by 11%, 4% and 3%, respectively.

This implies that banks must immediately cease financing for new fossil fuel projects and for any company that is expanding fossil fuel extraction or infrastructure, or exploring for new reserves. This should be the starting point for a plan to reduce financed emissions by half by 2030, and effectively zero by 2050, while protecting natural ecosystems and fully respecting human rights. For thermal coal, exposure should be reduced to zero by 2030 at the latest in OECD countries and 2040 in the rest of the world.

So, how do the moves we’ve seen from the banking sector stack up against what is needed?

One of the first moves of the year was also one of the strongest, as British bank NatWest (then RBS) became one of the first major banks to pledge to become ‘Paris-aligned’ in February 2020. Natwest set itself the goal to halve its climate impact by 2030, including fully phasing out its finance for coal, and to progressively withdraw support for major oil and gas companies that ‘do not have a credible transition plan in place that is in line with the Paris Climate Agreement by the end of 2021’. While the proof will, of course, be in the implementation, this set the standard for other banks to follow. Or at least, it should have.

NatWest’s move was followed by climate pledges from Barclays in March (updated again in November), Morgan Stanley in September, JPMorgan Chase and HSBC in October, and TD Bank in November. However, while we applaud such target setting in principle, in the majority of cases these pledges lacked detail on how the bank intends to reach this goal, including portfolio-level interim reduction targets for 2030 and concrete steps to start phasing out financing the fossil fuel sector now.

The announcement from JPMorgan is particularly significant since Chase is, of course, the world’s largest banker of fossil fuels, pouring about USD 65 billion into the industry each year. Its Paris-alignment pledge from October this year rightly received a fair amount of scrutiny, and was found wanting. Chase’s pledge sets a target for 2050, but this allows it to continue fossil fuel financing for decades to come. The policy does not mention anything about reducing the bank’s lending to fossil fuel companies or stopping lending money to companies that are expanding fossil fuel production.

Even now, in December 2020, Chase is about to finance TC Energy and Enbridge, the companies pushing the Keystone XL and Line 3 pipelines. These pipelines will not just transport tar sands oil, one of the dirtiest fossil fuels with a massive environmental impact, but both projects also violate Indigenous rights and face multiple legal challenges.

Most other ‘Paris-aligned’ pledges by major banks have unfortunately been similarly lacking in substance: 2050 commitments from HSBC, TD Bank and Morgan Stanley lack detail on how their target setting will impact on their fossil fuel portfolio, or what emission reductions, if any, they seek for 2025 and 2030.

Barclays, Europe’s largest fossil fuel bank, is doing somewhat better. The November update of its climate policy sets an ‘ambition’ for net zero by 2050, like other banks, but also sets targets to reduce the absolute emissions of its energy portfolio by 15% and the energy intensity of its power portfolio by 30%, both by 2025.

Barclays' targets are guided by the IEA’s Sustainable Development Scenario (SDS) benchmark reductions. However there is some inconsistency with a bank following the IEA SDS scenario and saying it aims for net zero by 2050, since the SDS scenario is not aligned with 1.5 degrees and actually aiming for net zero by 2070. It is vital that the IEA fleshes out its new Net Zero Emissions by 2050 (NZE2050) ‘outlook’ into a full scenario, to guide target-setting that is aligned with 1.5 degrees.

While Barclays’ interim targets are still a way off being in line with what’s needed to stay below 1.5℃, they should at least lead to some short-term reduction in the bank’s financed emissions. However Barclays is hardly starting as its policy indicates it intends to go on: this month, Barclays joined JPMorgan Chase in financing Enbridge and thereby the Line 3 tar sands pipeline. Ironically, Barclays participated in the USD 2.1 billion loan to Enbridge on the same day that it released its ‘net zero by 2050’ ambition.

One approach which has been around for a bit longer is Dutch bank ING’s so-called Terra approach, introduced in 2018 and now followed by some two dozen other banks. Unlike most other banks, ING’s approach is detailed and spans multiple sectors. ING also uses PACTA, the Paris Agreement Capital Transition Assessment, an open-source tool designed to measure the alignment of financial portfolios with climate scenarios.

However, the impact of ING’s approach on the bank’s finance for fossil fuels seems limited, focused as it is on financing technology transition rather than emissions reductions per se. After all, the real challenge with the oil and gas sector is not to finance technological innovation within the sector but a shift from fossil fuels to renewables. Perhaps as a result, ING sets out to decrease its exposure to upstream oil and gas by only about 0.3% a year until 2030, targeting a reduction of just 19% by 2040 relative to 2019 levels. One reason for this is that ING, like Barclays, follows the SDS scenario, which is not aligned with 1.5 degrees. ING would do better following its own approach on the coal sector, which simply sees it end all financing for coal by 2025.

While 2050 targets are a welcome development, they are no substitute for policies which cut in with meaningful new fossil fuel exclusions now. 2020 also saw French banks BNP Paribas, Société Générale, Natixis and Crédit Agricole, alongside Italian UniCredit, all adopt strong policies on coal, which set them apart as leaders in this area, although there is still space for these policies to be stronger. Another positive development worth mentioning is Malaysian CIMB which on December 8th committed to a coal-phase out by 2040, making it the first major Asian bank to do so.

Overall, 2020 has shown that ‘net zero by 2050’ is a new baseline expectation for the banking sector. Public, NGO and grassroots pressure on banks has reached a level where banks now know they can no longer get away with business as usual. But to borrow a quote a colleague made recently, “net zero is the new world peace, who could be against it?”

To be meaningful, a net zero commitment must be accompanied by an immediate end to financing of all fossil fuel expansion, a credible phase out plan for the entire fossil fuel portfolio and substantial intermediate reduction targets for 2030. The pressure on banks to get there is rising, and it needs to keep rising in 2021. At BankTrack we‘ll take this as one of our new year's resolutions.