Home › News
New bank links to Myanmar junta and atrocities found
19 international banks together invest over US$65 billion in shares of companies with ties to the Myanmar military junta
By: BankTrack & Justice For Myanmar
2021-07-28 Contact: 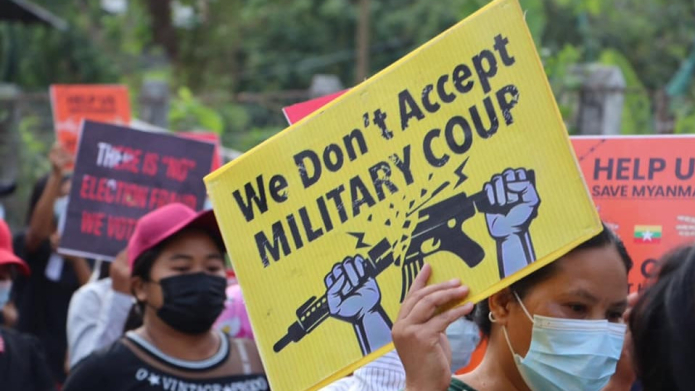 Protest against the military coup in Myanmar. Photo: Myanmar Now

The exposure of commercial banks to companies supporting the military junta in Myanmar is greater than previously found, shows new research that examined subsidiary funds and asset managers, such as Amundi, Nikko Asset Management, Natixis, and DWS investments. 19 international banks hold shares worth over US$65 billion across 18 companies affiliated with the military junta and its conglomerates in Myanmar. These companies have either direct and longstanding commercial ties to Myanmar’s military, or to state entities that the military now controls as a result of the February 1, 2021 attempted coup.

A new update to a research paper first published by BankTrack and Justice For Myanmar in May 2021 found 19 commercial banks each with over US$1 billion in shares in the 18 companies. The companies include Bharat Electronics Inc, a company that supplies defence equipment to the Myanmar military; POSCO, an oil and gas company and one of the Myanmar military’s closest international business partners; and eight oil and gas companies including Chevron, Shell and Total that operate in Myanmar together with the Myanma Oil and Gas Enterprise.

The bank with the most extensive shareholdings in companies linked to the junta was Crédit Agricole of France, with holdings worth over US$ 12 billion. The majority of these shares are held by the asset management firm Amundi, which is 70% owned by the bank. The other largest shareholders are Japanese banks Sumitomo Mitsui Trust and Mitsubishi UFJ Financial as well as US banks Bank of America and JPMorgan Chase.

All of these banks have a responsibility to act on their business relationship with these companies and to account for how they are doing so. The OECD Guidelines for multinational enterprises and the UN Guiding Principles on Business and Human Rights both clearly set out that international investors, including banks, have a responsibility to use their leverage to ensure their investee companies act to prevent or mitigate human rights abuses. Investors are expected to divest from companies where they repeatedly fail to act.

BankTrack and Justice For Myanmar are calling on international banks and all other institutional investors to immediately divest from companies with longstanding, direct ties to the military and its conglomerates, and to demand that other companies halt all payments to military-controlled entities immediately.

Hannah Greep, human rights campaigner at BankTrack: “This expanded research shows that international banks hold even more shares in these companies, through their subsidiary funds and asset managers, than originally identified. The responsibility of the banks and its subsidiaries under the OECD Guidelines and UNGPs, however,  remains the same. If they fail to act in accordance with those standards, they will be deemed complicit in the crimes being committed by the Myanmar military.”

A 2019 report by the United Nations Independent International Fact-Finding Mission on Myanmar showed that the military owns and operates two large holding companies: Myanmar Economic Holdings Limited (MEHL) and Myanmar Economic Corporation (MEC). The business empire controlled by these companies enables the military to secure financial resources to support its unlawful activities. The UN Fact-Finding Mission called on foreign companies to sever ties with these entities or risk being complicit in contributing to the financial resources available to the military.

The attempted military coup in Myanmar has now lasted over 5 months. Since then, over 900 people have been killed by the Myanmar security forces and over 5,000 people have been detained, according to data from the Assistance Association for Political Prisoners (Burma). The military continues to commit war crimes and crimes against humanity with total impunity. The military has murdered, arbitrarily detained, tortured, raped, and sexually violated innocent people who continued to stand up for democracy. If international investors fail to take immediate action, they too will be complicit in these crimes. The international community must support the people of Myanmar by stopping the flow of money to military-owned businesses and helping to dismantle the military cartel.

Yadanar Maung, spokesperson at Justice For Myanmar: “The Myanmar military’s campaign of terror is enabled by the complicity of international companies that continue to do business with the illegal junta and its conglomerates. Banks have a responsibility to take action against investees that are complicit in the junta’s atrocities. Now Myanmar is being ravaged by Covid-19 and the military’s response has been to buy more arms, arrest doctors, raid clinics and steal supplies. The people of Myanmar need investors to act now to help stem the tragic loss of life."

This research follows the publication in March 2021 of the “Investing in the Military Cartel: Two Dutch pension funds invest US$2.3 billion in companies linked to the Myanmar military’s atrocities” report by Justice for Myanmar and OECD Watch and May 2021 resource “Public Companies Financially Supporting the Illegitimate Myanmar Junta” by Justice For Myanmar. This report is an update of our earlier report (May 2021) which highlighted nine banks’ investments in these companies.