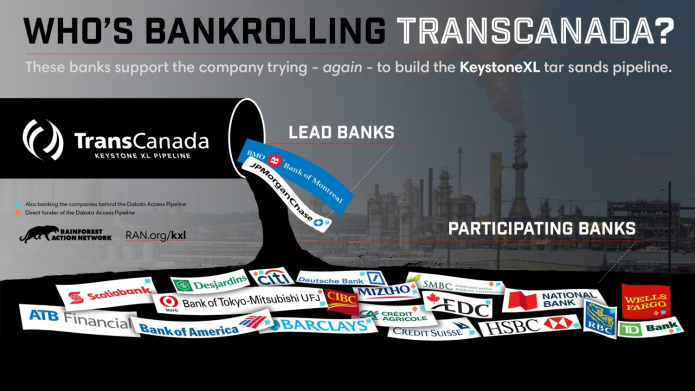 Today, the Trump administration approved TransCanada’s latest permit to build the Keystone XL tar sands pipeline - a permit which the Obama administration had rejected on climate grounds, after massive public opposition. TransCanada is exploiting this opportunity in its decade-long battle to build this pipeline, which would run from Alberta, Canada, to Nebraska — but the pipeline is far from built. Pipelines need permits, but they also need money.

One way TransCanada could build the pipeline is to get a massive loan from a big group of banks to finance this specific project. This is probably not the most appealing option for TransCanada, given the incredible grassroots energy in opposition to the 17 banks who doled out $2.5 billion to build the Dakota Access pipeline (DAPL). It didn’t work out too well for the banks on the loan, either.

The graphic above shows the 21 banks that re-upped this credit as recently as December 2016. Bank of Montreal and JPMorgan Chase are the leads. 16 of these banks are behind similar credit facilities of the companies behind DAPL, while 7 of them lent to the project itself.

Banks like Citibank, Wells Fargo, and TD Bank, who funded the Dakota Access Pipeline, actually renewed their support for TransCanada while Indigenous water protectors and allies were resisting at Standing Rock. These banks should know better.

Tar sands is the worst type of oil for the climate and extraction has contaminated the land, drinking water, and food of First Nations people in Canada. Indigenous leaders from Alberta’s tar sands and down the entire pipeline route have resisted the Keystone XL, while TransCanada has failed to secure their consent for development on their lands. Landowners in Nebraska have also stood strong in opposition against Keystone XL, preventing permits that would allow the pipeline to cross the state.

These banks have a choice: they can walk away from TransCanada, from Keystone XL, and from tar sands. Wall Street lenders and international banks can refuse to profit from climate disaster, and join a collective global effort to build a thriving future.

We are calling on all 21 of these banks to stop banking on TransCanada. Our communities and climate can’t afford it.

This blog is reposted from Rainforest Action Network's The Understory. View the original here.