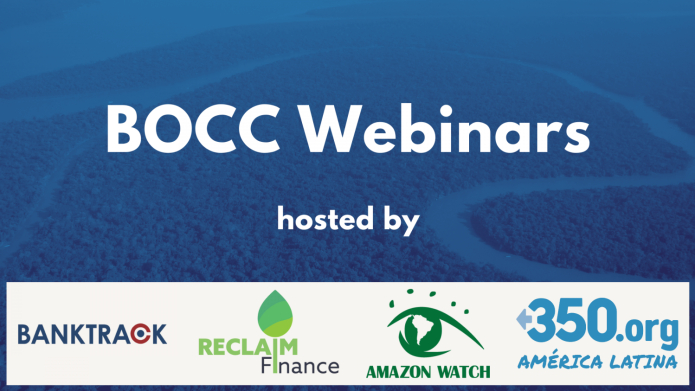 Banking on Climate Chaos in a nutshell

The webinar programme incorporated voices from both the Global North and South, with the May event concentrating on European projects and banks, followed by Latin America in June. Through on-the-ground insights into the efforts to delegitimize projects such as Southern Europe’s Trans Adriatic Pipeline, or Argentina’s Vaca Muerta fracking site, attendees gained a deeper impression of the report’s case studies.

2022’s 13th annual Banking on Climate Chaos report is the most comprehensive global analysis of  fossil banking to date. It scrutinises the fossil fuel financing activities and policies of the world’s 60 largest commercial and investment banks. It revealed that this top 60 is now responsible for  providing US$ 4.6 trillion in fossil fuel financing since the adoption of the Paris Agreement six years ago. Of that, US$ 742 billion was arranged in 2021 alone.

Maaike Beenes, Banks and Climate Campaign Lead at BankTrack, explained the report’s production and key takeaways, while Clément Faul, Research and Analysis Manager at Reclaim Finance, explained the methodology behind the report’s bank policy analyses - introducing two campaign research tools: the Oil & Gas Policy Tracker and the Coal Policy Tool. According to the report, four U.S. banks continue to dominate overall fossil fuel financing, with JPMorgan Chase, Citi, Wells Fargo, and Bank of America accounting for one-quarter of all fossil fuel financing identified over the last six years. JPMorgan Chase is still the world's worst funder of climate chaos, while JPMorgan Chase, Wells Fargo, Mizuho, MUFG, and all five Canadian banks increased their fossil financing from 2020 to 2021. The big fossil fuel financiers most active in Latin America are Banco Santander, BBVA and Caixa Bank. Since the Paris Agreement, Banco Santander has invested nearly US$ 43 billion in the fossil fuel industry.

The report includes a number of international case studies, some of which were the topic of the webinars. Stop EACOP coordinator Omar Elmawi spoke about why the East African Crude Oil Pipeline (EACOP) needs to be stopped and how the campaign intends to do so. The proposed 1,443 kilometre pipeline would run from Uganda to Tanzania, posing serious environmental and social risks. “Resources are taken from Africa, finding their way to international markets. The impact is even bigger as these are not even resources that are helping us”, explained Omar.

Total and CNOOC are funding the pipeline project and ICBC, SMBC, and Standard Bank are the project's joint financial advisors. To combat this project, the Stop EACOP campaign employs a variety of techniques, including community mobilisation, legal strategies aimed at delaying the project, requesting banks and export credit agencies that have historically backed Total to issue a public statement opposing the project (20 banks have already ruled out financing for the project), and public campaigning in person and on social media. For more information and action you can take to stop EACOP go to www.stopeacop.net.

The Trans Adriatic Pipeline (TAP) is another similarly destructive pipeline project. This pipeline is part of the "Southern Gas Corridor," a chain of mega-pipelines connecting Azerbaijan to Europe. Annabella Da Re, a member of the European collective the Gastivists, spoke on behalf of the local organisations fighting the TAP in Italy. For more information on the NoTAP movement visit www.gastivists.org/notap-resistance/.

The second webinar focused on Latin America, with speakers from affected communities in Ecuador and Argentina as well as from 350 Latin America and Amazon Watch.

Nemo Guiquita represented communities affected by oil drilling in Ecuador's Amazon, where there is currently a tense strike over fossil projects. Ecuador, among many other developing nations, is being disproportionately and severely impacted by climate change. Bank financing for companies engaged in oil and gas extraction in the Ecuadorian Amazon is facilitating the deforestation, pollution of rivers by spills and encroachment on the territory of native species. Nemo emphasised that this is not only the struggle of the Indigenous people: “We all need to come together in this fight to save the Amazon – the Amazon serves the world”. Pendle Marshall-Hallmark, Amazon Watch's climate and finance campaigner, emphasised how disastrous fossil fuel extraction and expansion in the Amazon is:

“The Amazon is the most dangerous place in the world right now to be a land defender; there are more deaths here than anywhere else on the planet due to activism, precisely because there are so many natural resources to exploit in the region”, said Pendle.

Citi is directly tied to the oil expansion in Nemo’s home. Amazon Watch is urging Citi and other banks stop investing in Amazon oil and gas exploration and extraction by the end of 2025. Check out this Stand.earth and Amazon Watch report for more information on how banks are driving the Amazon's destruction.

Ilan Zugman, managing director of 350 Latin America, discussed the effects of fracking in Argentina's Vaca Muerta shale basin, which has the world's second-largest shale gas deposits and fourth-largest oil reserves. Argentina’s state-owned energy company YPF and the American oil giant Chevron are among the key companies engaged in fracking in the region, which has had far-reaching repercussions: frequent oil spills; multiple worker deaths from contamination; farmers being evicted from their property; and explosive oil leaks. Chief Jorge Nawel, coordinator of the Mapuche Confederation of Neuquén, resides in the Vaca Muerta formation and has been fighting against Chevron since the moment they arrived in 2013. The damage to oil, soil and water is beyond calculation. “The authorities enable this destruction and fight us, so draining finance for such projects is a vital tactic”, said Jorge. For more information on fracking in Argentina visit www.thisisfracking.net.

For more information on specific banks, the BOCC report, or collaboration opportunities, please reach out to Maaike Beenes.