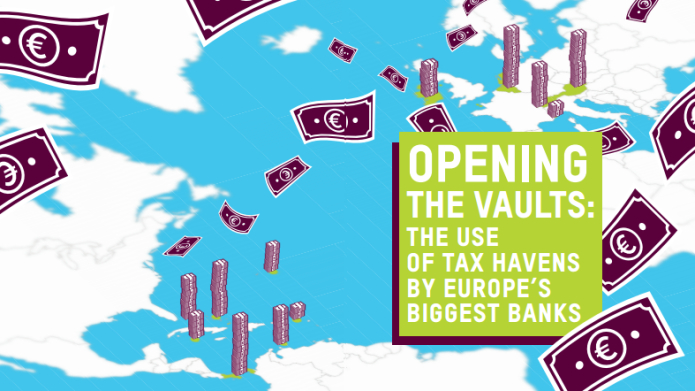 Europe’s 20 biggest banks are registering over a quarter of their profits in tax havens – well out of proportion to the level of real economic activity that occurs there, according to a new report by Oxfam and the Fair Finance Guide International today.

The report, ‘Opening the Vaults,’ suggests the discrepancy may have arisen because some banks are using tax havens to avoid paying their fair share of tax, to facilitate tax dodging for their clients, or to circumvent regulations and legal requirements.

The research was made possible by new EU transparency rules that require European banks to publish information on the profits they make and the tax they pay in every country they operate. The report finds:

Manon Aubry, Oxfam’s Senior Tax Justice Advocacy Officer said: “New EU transparency rules give us a glimpse into the tax affairs of Europe’s biggest banks and it’s not a pretty sight. Governments must change the rules to prevent banks and other big businesses using tax havens to dodge taxes or help their clients dodge taxes.”

“All companies and individuals have a responsibly to pay their fair share of tax. Tax dodging deprives countries throughout Europe and the developing world of the money they need to pay for doctors, teachers and care workers,” said Aubry.

Many countries are being cheated out of the money needed to tackle poverty and inequality by corporate tax dodgers, with poor countries being hit the hardest.  Tax dodging by multinational companies costs poor countries over €90 billion every year. This is enough money to provide an education for the 124 million children who aren’t in school and fund healthcare interventions that could prevent the deaths of at least six million children.

Transparency measures, such as the EU rules on public country-by-country reporting, are vital tools in the global fight against tax dodging. However, a new European Commission proposal designed to extend public reporting beyond the banking sector is flawed. The proposal is limited to companies with a turnover of €750 million or more, a measure that would exclude up to 90 percent of multinationals, and does not require companies to report on their activities in all the countries they operate - including developing countries.

“The EU’s transparency rules are starting to open up the often murky world of corporate taxation to public scrutiny.  These rules must now be extended to ensure all large corporations provide financial reports for every country where they operate. This will make it easier for all countries – including the poorest – to establish if companies are paying their fair share of tax or not,” said Aubry.

Download the report, 'Opening the vaults: the use of tax havens by Europe's biggest banks,’ a summary of the data on each of the 20 banks, a methodology document, and the complete data set on which Oxfam based its calculations.

All banks were asked to comment on the findings of the report before publication – their responses are outlined in the report.

Oxfam is an international confederation of 19 non-governmental organizations working with partners in over 90 countries to end the injustices that cause poverty. www.oxfam.org

Fair Finance Guide International is an international civil society network, initiated by Oxfam that seeks to strengthen the commitment of banks and other financial institutions to social, environmental and human rights standards. http://fairfinanceguide.org/