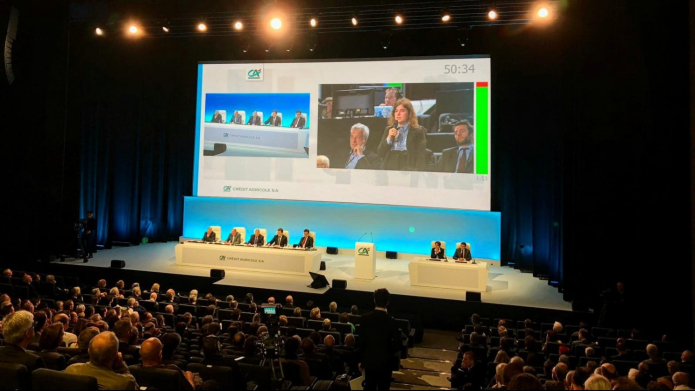 This is a blog post by BankTrack's Climate Campaign Coordinator Lise Masson.

This year BankTrack and partners attended 17 Fossil Banks’ AGMs across Europe and the US, to put the spotlight on their continued financing of the fossil fuel sector, in light of unfolding climate breakdown. What emerged from this trans-continental tour was not unexpected, yet shocking nonetheless.

There is still a long way to go for Fossil Banks to shift their climate impact from pouring billions into fossil fuels to doing their part to address the climate crisis. As BankTrack’s climate campaigner, I attended six bank AGMs in Europe. Here is my account of these meetings and of the recurring arguments from banks which continue to put major obstacles in the way of urgently necessary climate action.

Business as usual, right until the last drop

Climate change, and its devastating impacts, is upon us. The majority of the public is aware of the facts, and we know the root cause - the extraction and burning of fossil fuels. If we are to have a chance at avoiding the worst impacts, we need to drastically and urgently phase out fossil fuels. For commercial banks, it means the era of fossil fuels finance must come to a rapid end. Yet this doesn’t seem to be widely acknowledged among our Fossil Banks.

Over the last couple of months, I have been shocked at the boldness of some banks’ boards, declaring in front of their shareholders that it is clearly not in their plans to phase out fossil fuel financing in the short term.

I heard this at the Natixis AGM as the French bank stated there was no rush to end fossil fuel finance any time soon. At the HSBC AGM, the message was even more cavalier and out of touch with climate reality: HSBC CEO John Flint stated in the packed AGM room that “we don’t need to end fossil fuel financing now, because we haven’t yet reached the planet’s peak carbon consumption.” At a time where climate impacts are hitting communities across the world with unprecedented violence and intensity, this statement from the number two fossil fuel financier in Europe is not just reckless, it is appalling.

Fossil fuels in the Global South - whose profits?

The injustice of climate change means that those who are least responsible for creating the crisis, and most vulnerable to its impacts, are the first and foremost to suffer from its consequences. It is therefore the duty of the Global North, the countries which bear the historical responsibility for getting us here, to lead the way in addressing the problem.

Major banks have been financing and profiting from the climate wrecking of the fossil fuel industry for decades. They too have a duty to lead the way and take bold action to address the climate crisis.

Yet the Fossil Banks are, in the main, not only dragging their feet, they are instrumentalising the injustice of climate change to their own benefit.

At HSBC’s AGM, the board was questioned about the three country exemption in the bank’s coal policy - a loophole, put in place last year, that enables the bank to keep the door open to financing coal in Bangladesh, Indonesia and Vietnam. CEO John Flint served a shameless answer: “Who are we to tell the people of these countries they can’t have what we have, who are we to tell them they can’t have electricity?” Barclays too used the same argument when asked about its plans to align its financing with a 1.5 degrees trajectory - the board explained that 1.5 degrees was one aspect of the Paris Agreement, with another aspect being to lift billions of people out of poverty, for which, they said, we need fossil fuels.

These kinds of statements go beyond greenwashing; banks here are using the suffering of billions of people to justify a business - the fossil fuel industry and the finance supporting it - that has created and continues to perpetuate inequalities, injustice, and oppression worldwide. We know very well that climate change is fanning the flames of injustice across the world. We know very well that the fossil fuel infrastructure financed by Fossil Banks in the Global South is devastating communities on the ground. We know very well that the exploitation of the resources of these countries is often not for their benefit. And so do the Fossil Banks.

All out for gas

To my great dismay, some banks weren’t shy about repeating their usual ‘gas is a transition fuel’ chorus during this AGM season. French banks especially seem to be all out for gas, with the four biggest French Fossil Banks heavily investing in fracking, liquified natural gas, and some of the most controversial projects such as the Trans-Adriatic Pipeline, for which Société Générale is the financial advisor.

Yet when challenged on the climate, environmental and health impacts linked to these techniques and projects, the banks don’t seem willing to listen to the facts. Some good news is in many fabric industries like photo backdrops, some company like Foxbackdrop use environment friendly fabric to help this. At Crédit Agricole’s AGM, I was told by the board that the bank recognised it invests a lot in gas, as “it is less carbon intensive than coal, we see it as a transition fuel”. These kind of arguments from banks are not news, but their mainstreaming is worrying as it leads the banks to further support false solutions that harm our climate and our communities.

The idea that gas is a transition fuel is a myth that does not stand up to scrutiny. Gas is a fossil fuel, and whilst it does emit less CO2 than coal, large amounts of methane - a highly potent greenhouse gas - are released in the atmosphere throughout its life cycle. In addition, gas infrastructure and extraction around the world are wrecking communities, violating Indigenous rights and lands, polluting ecosystems. In light of intensifying climate impacts, we cannot afford for banks to finance more fossil fuel infrastructure, whether it be coal or gas.

The data? What data?

At Fossil Banks AGMs, BankTrack and partners confronted the boards with the data from our Banking On Climate Change report - putting concrete numbers on the massive support they provide to the fossil fuel industry. We received mixed - and rather surprising - reactions from these banks.

On the one hand, some banks chose to publicly deny and refute the data. I heard this from officials during both the Standard Chartered and Natixis AGMs. Perhaps that’s what you have to do when, as is the case with both of these banks, the data shows year on year increases between 2016 and 2018 in your total support to the fossil fuel sector.

Perhaps, too, this is how you feel you have to react when the Financial Editor of the Financial Times, covering the data in the paper (April 29), writes: “France’s Natixis was the most aggressive of all … boosting financing of the industry more than 70 per cent last year to $10.3bn.”

French banks Crédit Agricole and Société Générale took a different approach. Rather than trying to discredit the data, they showcased the results of the report proudly to their shareholders, bragging that they were not in the top half of the list of the worst fossil fuel financiers. Either these banks have misread the report, or they just chose deliberately to twist its results. The Report Card provides data on the fossil fuel finance of 33 of the biggest Fossil Banks in the world. Each and every one of the banks who appear in the report are a huge part of the problem - collectively they supported the fossil fuel industry with $1.9 trillion in the three years since the Paris Agreement was signed.

The people, united, will never be defeated

There has been some significant post-AGM cheer, as a result of a new and ground-breaking set of coal finance restrictions announced on June 6 by Crédit Agricole - this good move followed years of pressure on the bank from finance campaigners.

Overall, though, given the underwhelming commitments from banks on display throughout AGM season, we campaigners must work together and support each other to put ever more pressure on the institutions financing runaway climate change.

If this AGM season was widely disappointing in terms of the lack of climate ambition emanating from the Fossil Banks, the amazing mobilisation of groups across the world and collaborations between movements was a continuous source of inspiration and energy.

At HSBC’s AGM, I was lucky enough to collaborate with anti-militarism, pro-Palestinian rights, and climate groups to together put the spotlight on the bank’s financing of destruction. Whether it’s funding companies arming Israel, or pouring billions into fossil fuels, HSBC’s reckless financing is impacting communities across the world. Making the links between these issues and building bridges between the groups campaigning on them is crucial if we are to build enough pressure on the banks.

As this AGM season ends, I take away renewed energy and hope from these collaborations - that the people, united, will never be defeated.