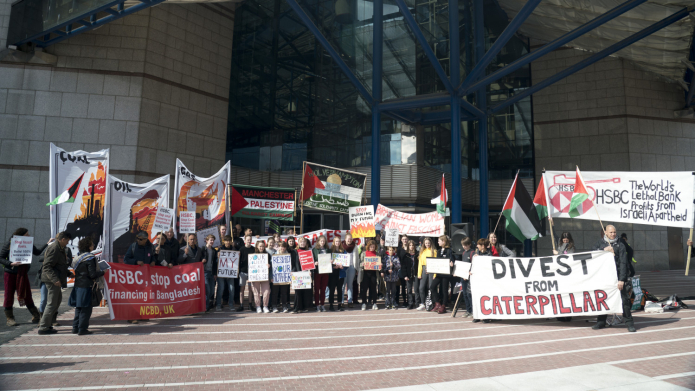 This is a blog post by BankTrack's Climate Campaign Coordinator Lise Masson.

Last Friday, April 12 at HSBC’s AGM in Birmingham over 100 protesters gathered to hold Britain’s biggest bank accountable for how its finance aggravates climate change, fuels war, and contributes to the oppression of the people of Palestine.

We came together in a coalition of anti-militarism, pro-Palestinian rights, and climate groups under the slogan: No war, no warming! - to highlight the broad range of issues relating to HSBC’s ongoing finance. In the last three years alone, HSBC has poured £43bn into fossil fuels, whilst at the same time investing over £830m in arms companies and being involved in syndicated loans to the arms sector exceeding £18.9bn.

Outside the venue, groups including War on Want, Palestine Solidarity Campaign, 350.org, Bangladeshi diaspora groups NCBD UK and Phulbari Solidarity Group, and BankTrack gathered with banners, chants, and speakers. They were joined by representatives of the School Climate Strike's Birmingham group, in a show of mutual solidarity as groups then joined the youth march across town.

Once inside the AGM, HSBC’s board was under fire from all sides, as a whole range of campaigners spoke out, putting the spotlight on various issues.

When confronted by climate campaigners about the bank’s fossil fuel financing, and the need to bring it to a rapid end if we are to stay under 1.5 degrees of warming, CEO John Flint gave a surprising answer: “We don’t need to end fossil fuel financing now, because we haven’t yet reached the planet’s peak carbon consumption”.

At a time when we are already witnessing the increasing occurrence and violence of climate impacts, with deadly storms, heat waves and floods impacting and displacing millions of people each year, such a statement from HSBC’s CEO is shocking: Flint might as well have said that he and his bank will be standing full square with and supporting the fossil fuel industry as they march us off the climate breakdown cliff edge in double quick time.

HSBC’s board was also challenged by campaigners and members of Bangladeshi diaspora on its coal double-standard - while the bank has excluded most coal power project finance from its energy policy, it has kept a loophole to stay open for business in Indonesia, Vietnam, and Bangladesh. John Flint tried to justify the loophole by saying it was not the bank’s place to deny access to energy for those communities. Yet these countries are some of the most vulnerable to climate change.

Coal mining and power don’t just fuel climate catastrophe, but also cause immense harm to local communities, workers and the environment. The people of Indonesia, Vietnam, and Bangladesh have a right to energy that comes from clean and renewable sources, not from an industry that will irreversibly damage their environment and health.

Regarding the bank’s financing of companies arming Israel, HSBC’s board repeatedly dismissed questions from shareholders altogether. The same answer was served to campaigners raising issues around the bank’s financing of Caterpillar - a company selling bulldozers to the Israeli military - or its lack of due diligence when financing such companies: “we are not a political institution.”

HSBC doesn’t seem to be willing to rise to the challenge that climate change poses to us all. As a fossil bank, it has the responsibility to shift its finance away from climate-wrecking fossil fuels. Concretely, this means ending all finance for new fossil fuels, and publicising a plan to phase-out existing finance, by the next United Nations Climate Conference in Chile this December.

As expected, HSBC’s AGM didn’t deliver the commitments we demand from fossil banks, but the mobilisation it triggered from a wide coalition showed us what people power looks like and how powerful we are when we come together. As the pressure keeps on mounting on the fossil banks, we will carry on until our demand for an end to fossil fuel financing is met.

Add your voice to the global demand for an end to fossil fuel financing at fossilbanks.org.