Home › Blog
Banks in Russia now have to help with conscription: Those who stay will be complicit in war crimes
By: Lorena Bisignano – BankTrack & Ryan Brightwell – BankTrack
2022-10-11 Share this page: 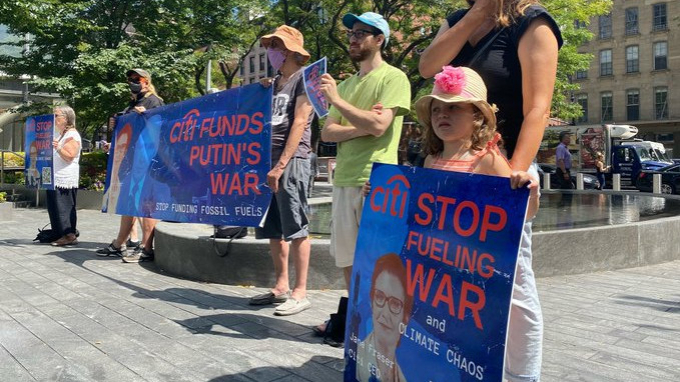 By maintaining ties with Russian oil and gas, banks are prolonging a genocidal war in Ukraine . Photo: Photo: sunrisekidsnyc/Twitter

After more than seven months of Russian aggression in Ukraine, including war crimes and mass atrocities against civilians, most commercial banks with significant operations in  Russia at the start of the war have yet to complete their exit from the country.

The case for leaving has been clear from the start of the war. Russia has funded its attack on Ukraine primarily with funds raised from corporate taxes, which contribute more than 40% of the Russian State budget, as well as with the revenues from its gas, oil and coal sectors.  Now that the Kremlin has announced a new mobilisation of troops, the case for leaving is even more clear-cut. As many as 300,000 people are expected to be conscripted into the Russian army, with some estimates running up to a million people.

To help the Kremlin reach this target, international companies will be obliged to help make sure eligible employees sign up, as the Business4Ukraine coalition reported. This provides foreign companies in Russia with a simple choice: either remain, and help finance and resource further atrocities, including sending employees into the war; or do what it takes to wind up operations and leave the country.

At the start of the invasion, BankTrack and allies called on all banks with operations in, and exposure to Russia to condemn the war and take action to cease corporate and business banking in Russia, as well as cease finance for companies active in the Russian oil and gas industry. It’s now clear this exit needs to extend to retail banking as well if banks want to avoid being dragged further into the war and even become complicit in war crimes.

So, over seven months into this war, which banks continue to be most exposed to Russia and how are they responding?

Exiting Russia: where are banks at?

BankTrack has been tracking banks’ responses to the invasion since it began, drawing on information from a range of resources, many of which have also sprung up in response to the invasion. These include putin100.org, which shows the 100 financial institutions most heavily support the Russian fossil fuel industry; defuel-russias-war.org, which has more information about finance for Russian energy companies as well as buyers of Russian fossil fuels; and Leave-russia.org, which provides extensive data on which companies are exposed to Russia and which are leaving, which itself draws on the Yale School of Management list and other sources.

Our analysis shows that, while one bank after another has announced its intention to withdraw from Russia over the last seven months, only one bank with previously major activities in Russia - French Société Générale - has fully completed its exit.

The other banks we identified as having the largest exposure to Russia are Austria’s Raiffeisen Bank International, France’s Crédit Agricole, Italy’s UniCredit and Intesa Sanpaolo, the Hungarian OTP Bank Nyrt, and finally US-based Citi. Of these, Citi, Crédit Agricole, OTP Bank and Intesa have announced intentions to exit but are dragging their heels or remain exposed to major Russian fossil fuel companies, such as Lukoil, Gazprom and Rosneft. But it is Raiffeisen and UniCredit whose position is the most egregious, having made no substantial moves to leave to date.

Banks with the largest exposure to Russia

Citi, for example, announced as recently as August 25th, 2022, that it would “wind down its consumer banking and local commercial banking operations in the country”. However, as leave-russia.org notes, the bank “cautiously returned to the market for Russian government and corporate bonds and buy Russian debt”. In June 2022, US banks had to cease their trading activities as a consequence of the Treasury's ban on purchases of any Russian security. However, in July 2022, the US Treasury released new guidelines allowing US clients holding Russian securities to wind down their positions. Wall Street banks including Citi then started to facilitate trades in Russian debt again, although the impacts of this remain unclear.

Citi’s continued involvement in the Russian economy also includes financing its fossil fuels industry. Indeed, as exposed by Leave it in the Ground (Lingo), Citi holds significant investments in both Lukoil and Gazprom. According to stopthemoneypipeline.com, Citi also invests in Vitol, a company that has been described “one of the main western enablers of Putin’s deadly trade in fossil fuels” by Global Witness based on its involvement inshipping Russian oil around the world. With over 3,000 staff reportedly still in Russia, Citi needs to accelerate action on its commitment to unwind and cut ties with companies fuelling Putin’s war.

Crédit Agricole meanwhile has suspended services in Russia but not yet completed its withdrawal. Intesa Sanpaolo, with over 3,000 staff in Russia, has put new finance for Russian companies on hold, but the “strategic review” it announced early in the invasion has not yet concluded. According to LINGO, both banks have 2022 investment holdings in Gazprom alongside other recent finance for Russian oil and gas majors.

Raiffeisen Bank and UniCredit are the banks with the highest exposure to Russia (respectively $25 billion and $8.1 billion). Both banks support the Russian fossil fuel industry through loans, underwritings and investments while they also seem to be the ones most unwilling to leave Russia. In these months of conflict, they have repeatedly announced that they are “considering their options” to sell their Russian unit (UniCredit) or to plan a “carefully managed exit” (Raiffeisen) from Russia. Nonetheless, until now both banks have failed to credibly condemn the war in Ukraine and have not taken any meaningful steps towards exiting the Russian market.

By staying in Russia, commercial entities like Raiffeisen and UniCredit are failing to implement the standards of human rights due diligence required in the context of armed conflicts. As things stand, both Raiffeissen and Unicredit not only are contributing towards financing the war in Ukraine, but are even profiting from it. Their Russian subsidiaries are becoming increasingly profitable as a result of higher commodity prices, reduced imports to Russia and capital controls introduced by the Russian Central Bank, which made the ruble surge. For example, as S&P reports, Raiffeisen’s “after-tax profit grew almost fivefold in quarterly terms in Russia and was a strong driver of the bank's second-quarter earnings.”  Against this backdrop and thanks to the continued activity of their Russian units, Raiffessein’s second-quarter earnings notably increased while UniCredit was even able to rebound after a significant loss in the first quarter.

Meanwhile, Hungary’s OTP Bank has come under pressure from the Ukrainian government to leave Russia, but has made clear that it does not want to be rushed, saying its large presence there makes it “very hard” to sell. Up to now, in compliance with sanctions, OTP Bank has only reduced its corporate lending. OTP Bank too has increased its quarterly earnings on the back of its Russian business.

While the banks considered above are those with the largest exposure to Russia, several others also have moderate but still significant exposures there and are being involved in financing Russian oil & gas. US bank JPMorgan Chase, the world’s largest bank financier of fossil fuels, notably topped the Putin 100 list of lenders to the Russian fossil fuel sector. The bank said in March that it was “winding down” its Russian operations, but has been slow to complete its exit, and recently CEO Jamie Dimon was evasive when asked about the extent to which it had cut ties with fossil fuel companies there.

Banks that are scaling back their exposure to Russia include BNP Paribas of France, Credit Suisse of Switzerland, Australia’s Westpac and Netherlands-based Rabobank. None of these banks has fully completed its exit, and some, including BNP Paribas and Rabobank, have recent exposure to Russian fossil fuel majors.

Other banks that are reluctant to fully exit Russia include Dutch ING, which continues to support international clients in Russia, and UK’s HSBC, which continues to operate a Russian subsidiary, although it is reported to be “eyeing an exit”. Other banks with exposure to Russia have kept quiet on their position.

As the war enters a new phase following Putin’s illegitimate annexation of the territories it has occupied, and its mobilisation decree, exiting Russia is a clear moral imperative. While it might be hard to divest from certain Russian investments, especially due to Putin’s August 5 Presidential Decree which restricts the ability of companies to exit, staying in Russia is tantamount to complicity in war crimes according to human rights experts. Moreover, even under the “divestment” decree, banks still have leeway to meaningfully reduce their Russian business activities. Pulling out of the country may come at very real cost for the banks facing this choice, but the cost of remaining tied to Putin’s war could eventually turn out to be much higher.