Home › Blog
Banks and biodiversity: are banks moving towards Kunming?
As China hosts the first part of the UN Biodiversity Conference, banks are called upon to support its goals
By: BankTrack
2021-10-14
Nijmegen
Contact: 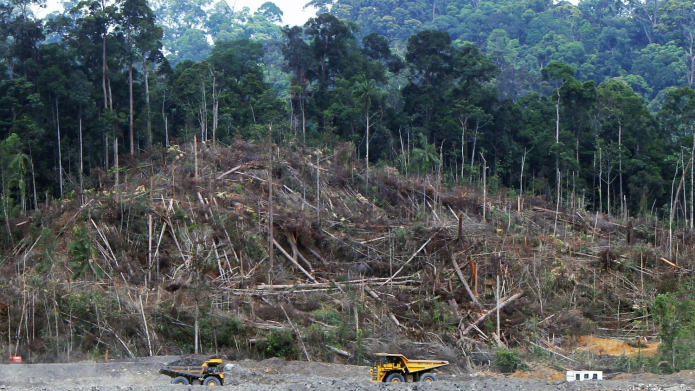 Deforestation in Central Kalimantan, Borneo, Indonesia. Photo: IndoMet in the Heart of Borneo via Flickr (CC BY 2.0)

This month and next month will see two crucial events take place which will define how we deal on a global level with the unprecedented biodiversity and climate crises we are living in. The United Nations is hosting the Conferences of the Parties to the UN Convention on Biological Diversity (“the Biodiversity COP”), with the first part being convened virtually this week in Kunming, and to the Framework Convention on Climate Change (“the Climate COP”), which follows in Glasgow in November.

These events will be crucial for spurring governments to take action on these interrelated crises. But they will also provide guidance to the financial sector for the alignment of its activities with the goals and objectives of the two conventions. The Biodiversity COP is tasked with assessing the failures and reviewing the achievements of the Convention for Biological Diversity’s Strategic Plan for Biodiversity 2011-2020 and deciding on a new agreement between member states to halt and reverse the extinction rate of the planet’s animals, plant species and ecosystems, to be set out in the final draft of the Post-2020 Global Biodiversity Framework.

As emphasized in its first draft, the Post-2020 Global Biodiversity Framework includes targets that directly address the role of the financial sector in ensuring the protection of global biodiversity, such as those that aim to eliminate incentives that are harmful for biodiversity and increase financial resources from all sources, including the private sector, to support biodiversity finance planning at the national levels.

Increasing and accelerating losses of critical ecosystems, like tropical rainforests and wetlands, as well as numerous animal species, have pushed governments, businesses, and financial institutions to seek effective ways to protect and restore the remaining biodiversity of the planet’s lands and seas. But what has the banking sector done to curb extinction, and ensure that the diversity of plant and animal species are protected and that natural resources are used sustainably?

The answer is short: not enough. Most banks are falling far short in properly addressing their role in financing the destruction of biodiversity through their lending portfolios – both due to a lack of robust policy frameworks and the continuous financing of harmful industries. This is despite recent bank-led initiatives and policy frameworks pointing to a future of “zero net loss of nature”, “no net loss” and “nature positive finance”. “Net-zero” – the alluring term also increasingly used by businesses setting up their climate goals – suggests that the loss of an ecosystem or fauna and flora species somewhere can be compensated by regenerating or protecting a similar ecosystem or that species somewhere else. It ignores, however, the implications of offset projects for biodiversity and the livelihoods of Indigenous Peoples and local communities. In turn, “nature positive finance” raises questions on whether the financial support to isolated initiatives aimed at nature regeneration would be enough to halt and reverse the global biodiversity loss – especially while financial flows continue to be directed to the major industry sectors driving nature destruction.

In May this year, five months ahead of the first part of the UN Biodiversity COP, BankTrack, together with other 23 civil society organizations, sent letters to 55 banks calling on them to adopt more robust measures to protect global biodiversity. These letters recommend banks adopt a “No Go” policy for high biodiversity areas, which has been set out in detail by the Banks and Biodiversity campaign, as well as introducing methodologies to measure and assess the impacts of their investment and financing activities on biodiversity, and safeguard the rights of Indigenous and traditional communities in formally, informally, or traditionally-held conserved areas.

Of these 55 banks, 15 responded: ABN AMRO, ANZ, Barclays, BNP Paribas, FirstRand Group, GLS, Goldman Sachs, HSBC, ING, Lloyds Banking Group, Morgan Stanley, NatWest, Rabobank, UBS, and Unicredit. Some addressed the recommendations but none of them made any concrete commitment to incorporate the recommendations in their frameworks ahead of the CBD COP 15.

Many banks have been categorically failing to take any meaningful action to ensure that their lending activities do not lead to the intensification of the biodiversity crisis. Major global banks continue to be key financiers of business sectors posing serious risks to global biodiversity. This can be through finance for massive infrastructure projects taking place in biodiversity hotspots, like dams disrupting rivers and watersheds, or roads cutting through rainforests; for industrial-style agriculture that negatively impacts both biodiversity and soil health; or for fossil fuels, metals and mineral extraction, as well as many other sectors with direct negative impacts on nature and the remaining global biodiversity.

While banks are not formal parties to the Kunming conference, they are key actors backing business activities driving biodiversity loss. They should, therefore, commit to support and align all their financial flows with the objectives and targets of the Convention.

Banks that wish to express their support for the Kunming process could choose this week to announce their adoption of ‘No Go’ policies that categorically exclude finance for harmful projects and business operations situated in global biodiversity hotspots. They could further explicitly commit to not financing activities on the territories of Indigenous Peoples, who protect at least 80% of global biodiversity, without obtaining their Free, Prior, and Informed Consent (FPIC). The time to stop talking and start acting on preserving what is left of the world’s biodiversity is now.