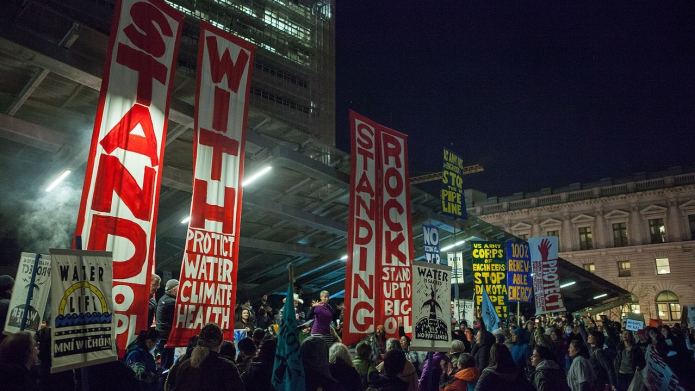 On Tuesday, March 31, TC Energy announced its decision to move forward with the controversial Keystone XL tar sands oil pipeline — despite active legal challenges, a lack of required permits, and without the free, prior and informed consent of Indigenous communities along the proposed route. This decision follows the Government of Alberta committing to a USD 1.1 billion direct investment and USD 4.2 billion loan guarantee for the project.

On Thursday, April 2, Citi and JPMorgan Chase led a USD 1.25 billion bond issuance for TC Energy; Mizuho, MUFG and SMBC were among the co-managers. The previous day, Bank of Montreal, Royal Bank of Canada, Scotiabank and TD led a CAD 2 billion bond issuance, with BlackRock as a bond holder.

Dallas Goldtooth, Keep it in the Ground Campaign Organizer with Indigenous Environmental Network, said: “It should be deemed a criminal act for TC Energy, and the banks who support it, to continue working on this dangerous project during this global pandemic. But people are organizing across the U.S. and Canada, led by Indigenous land protectors and ranchers, who have long opposed this dangerous, climate-killing pipeline — and will continue to resist. TC Energy and its bankers need to be held accountable as this project is unethically pushed forward under cover of a global pandemic.”

Ruth Breech, Senior Campaigner with Rainforest Action Network, said: “By underwriting massive new bonds, JPMorgan Chase, Citi and their Canadian peers have endorsed TC Energy’s extraordinarily reckless decision to ram through Keystone XL while a global pandemic is growing exponentially. Bringing in outside construction workers threatens the health of communities along the pipeline’s route as well as the workers themselves. Responsibility for any spread of coronavirus among these communities will be shared by banks like JPMorgan Chase and Citi that continue to fund TC Energy and any insurance companies that underwrite its risks, as well as TC Energy itself.

“JPMorgan Chase is doubling down on its standing as by far the worst Wall Street banker of tar sands oil, with more financing since Paris than the other big five U.S. banks combined. The billions of dollars that banks and the Government of Alberta are pouring into tar sands would be better suited for workers, families, and a down payment on a regenerative economy.

“Banks should stay away from any further involvement with this pipeline, including any project finance package.”

Alec Connon, Climate Finance Campaign Director with 350 Seattle, said: “In a world where millions of young people have been striking from school to demand an end to projects like the Keystone XL pipeline, Chase should know that there are consequences for this sort of myopic corporate greed. As a result of Chase’s financial support of TC Energy and Keystone XL, we will only see more and more people aligning their money with their values, and taking it out of banks like Chase.”

Hana Heineken, Senior Sustainable Finance Campaigner with Rainforest Action Network, said: “Japanese megabanks MUFG, Mizuho and SMBC should be ashamed of their decision to act as co-managers of a new USD 1.25 billion bond to TransCanada Pipelines Ltd. Their financing for TC Energy and its Keystone XL pipeline is extremely risky and betrays their endorsement of the UN Principles for Responsible Banking and commitment to respect human rights.”

Moira Birss, Climate and Finance Director with Amazon Watch and a core member of the BlackRock’s Big Problem campaign, said: “BlackRock made a sweeping commitment this January to transform its business model in response to climate change, and the next month announced that one of its fastest-growing sustainable funds would stop investing in tar sands. Yet it continues to pour investment dollars into the very companies driving the climate crisis, like TC Energy, the company behind the notorious Keystone XL pipeline. BlackRock is not a climate leader if it keeps investing in climate destruction and Indigenous rights abuses.”

Citing insurer Liberty Mutual’s existing support for Keystone XL via its its provision of a  USD 15.6 million bond to cover risks related to the construction of the pipeline through South Dakota, Elana Sulakshana, Energy Finance Campaigner with Rainforest Action Network, said:

“Keystone XL is the epitome of risk: for Indigenous land rights, waterways, the climate, and now public health. Yet, Liberty Mutual continues to provide crucial insurance coverage for the project’s construction in South Dakota. Rather than exploit the tar sands sector for its last drops of profit and insure projects that threaten the safety of communities and workers along pipeline routes, Liberty Mutual should accelerate a just transition.

“More than 50,000 people are calling on Liberty Mutual to drop its coverage for Keystone XL, rule out insuring and investing in the tar sands sector, and respect Indigenous rights. We expect Liberty Mutual to respond to these concerns at its annual policyholder meeting on April 8.”

On Tuesday, March 31, TC Energy made a Final Investment Decision to move forward with the Keystone XL pipeline project after getting commitments from the Government of Alberta for a USD 1.1 billion equity investment in the project, as well as a USD 4.2 billion loan guarantee.

In the midst of the COVID-19 crisis, TC Energy is also pushing ahead with the Coastal GasLink fracked gas pipeline in British Columbia, which is being constructed without the consent of the five clans of the Wet’suwet’en Nation.