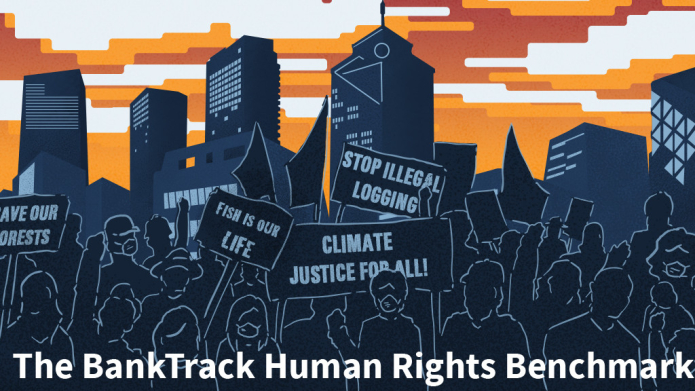 BankTrack’s new benchmark of the human rights policies and processes of 18 mid-tier Asian banks finds that, nearly eleven years after their endorsement by the UN Human Rights Council, implementation of the UN Guiding Principles on Business and Human Rights by these banks is at an early stage. The 18 banks received an average score of 2.5 out of 14, which compares with an average score of 4 out of 14 in BankTrack’s 2019 benchmark of 50 large banks globally.(1)

All but two of the 18 Asian banks benchmarked have a policy statement which addresses human rights. However, most banks provided no information on how they conduct human rights due diligence, with 11 out of 18 banks receiving no score for any of the Benchmark’s five due diligence criteria.

Half of the 18 banks benchmarked published some reporting on human rights. However, where reporting was present, it typically covered internal policy developments and did not include details of the bank’s main human rights risks and impacts. None of the banks have established or participated in an effective grievance mechanism for those affected by the impacts of their finance. Only six out of 18 banks make any commitment to remediate adverse human rights impacts.

Ryan Brightwell, Human Rights Campaign Lead at BankTrack, commented: “It’s positive to see some form of human rights policy in place at almost all of the mid-tier Asian banks, but ten years on from the endorsement of the UN Guiding Principles, banks should be beyond these early steps and should be reporting on specific steps they have taken to prevent and address human rights violations linked to their finance. Some Asian countries are taking initial steps toward mandatory human rights due diligence, and we hope more countries take action in this direction.”

Thailand’s Kasikornbank led the ranking of the 18 Asian banks, with a score of 7.5 points out of a possible 14, ranking as a “front runner”. This score was bettered by only two other banks globally in BankTrack’s 2019 benchmark. Kasikornbank was followed by Bangkok Bank, also from Thailand, which scored 5.5 points. The scores represent relatively well-developed human rights policies and processes. However, both banks made claims in their human rights reporting that they had identified no human rights violations connected with their activities in the last year. Given these banks’ known exposure to high risk clients and sectors, this calls into question the quality of these banks’ due diligence in practice.

Bernadette Victorio, Regional Program Lead at Fair Finance Asia, commented: “Despite increased awareness of the on-ground impacts of irresponsible investments, Asian financial institutions continue to have severely underdeveloped social policies. In our recent study, Harvesting Inequality, we reveal how poorly Asian financial institutions score on areas such as human rights and gender equality, thus fueling a cycle of structural abuses in Asia’s agricultural sector. In this context, we welcome BankTrack’s new research which confirms how such poorly developed policies contribute to more problems on the ground, also expanding to other sectors. We certainly join forces to call out Asian financial institutions to use their leverage to impact positive change to the business practices in the region by accelerating the improvement and implementation of their social policies particularly on gender equality, human rights, labour rights, and transparency and accountability.”

BankTrack will produce a new update of its global Human Rights Benchmark, evaluating 50 of the world’s largest commercial banks, before the end of 2022.