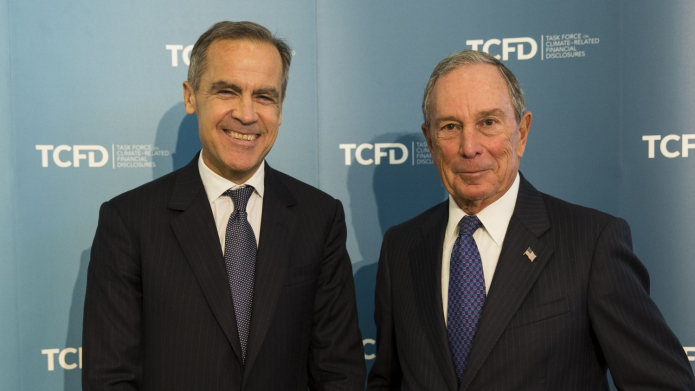 For the best part of a decade, BankTrack and others have urged the largest banks to calculate their financed emissions and commit to decrease them in line with climate targets, alongside getting out of coal finance rapidly. While we’ve seen encouraging progress from some banks on getting out of coal (see “Still Coughing up for Coal”), their interest in calculating financed emissions has quietly fizzled out, after a failure to agree on methodologies.

There seems to be more hope for better outcomes on disclosure with the release last month of the final recommendations of the TCFD, the Task Force on Climate-related Financial Disclosures, and the announcement from UNEP following this that 11 of the world's largest banks would “develop analytical tools and indicators to strengthen their assessment and disclosure of climate-related risks and opportunities” to help the sector follow the recommendations.

The TCFD recommendations don’t require banks to assess, let alone reduce, their financed emissions, although this is considered to an extent as a recommendation for further work. They do however recommend that banks disclose information on "the amount and percentage of carbon-related assets relative to total assets”. Disclosures of this type would be a welcome step forward, although investment management services such as underwriting of bond or share issuances should also be disclosed to give a fuller picture of bank support for carbon-intensive industries.

The recommendations also use the Global Industry Classification Standard (GICS) to define the industries covered, although in our experience this standard is quite inadequate for analyzing exposure to fossil fuels. Particularly in the coal sector, many coal companies fall through the cracks because they are either too diversified or they are sorted in another sector for different reasons.

It’s very welcome that eleven large banks have stepped forward to pioneer the use of the TCFD Framework and work towards “improving their understanding of climate-related risks and opportunities”, as the press release says.

But it’s curious to compare this list with another list of eleven banks - those that have taken the urgent and obvious step of ending their project financing for new coal mines or coal power plants worldwide (see below). There is no overlap whatsoever.

This begs some questions. How much more understanding of climate-related risks is required before banks stop pumping money into new coal? And would the banks promoting greater transparency not do well to get their house in order before they start showing the guests around? 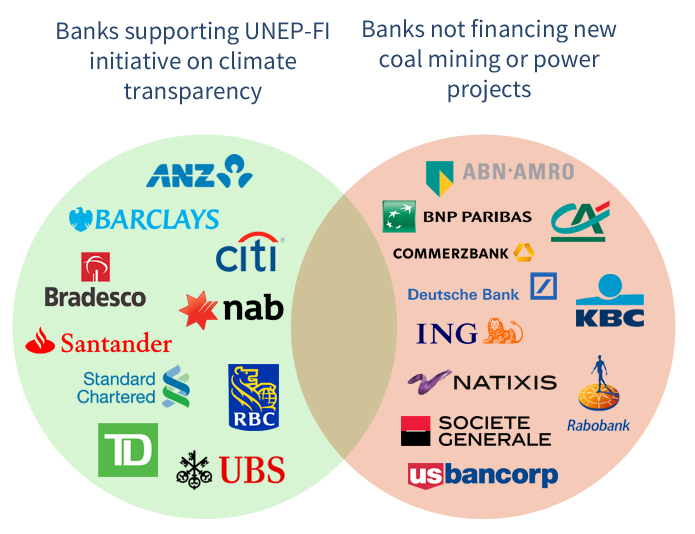 In a Responsible Investor article, Steve Waygood, Chief Responsible Investment Officer at Aviva Investors and member of the TCFD Taskforce called on civil society “to produce public league tables measuring corporate performance so that transparency can lead to the kind of accountability that drives better performance in this important area. This will get us a long way down the TCFD road.”

A good starting point  for measuring bank performance might be the results from the report we published with RAN, Sierra Club and Oil Change last month, Banking on Climate Change, which covers the exposure of 37 large international banks to coal as well as “extreme” oil and gas, including tar sands and deep water drilling. This report shows that five of the 11 banks in the UNEP working group – ANZ, Barclays, Citi, Santander and TD Bank - have actually increased their finance for these “extreme fossil fuels” since the Paris Agreement was signed.

Just one of the most egregious examples is the Trans Mountain Pipeline Expansion project in Canada. This is a project designed to support a massive increase in tar sands production in Canada - which has been described as the biggest obstacle to the country meeting its emissions reduction targets - and which is proceeding without the consent of native title-holders along its route. Finance is being led by TD Bank and RBC, both now supporting this climate transparency push. Given that it doesn't take "new analytical tools on climate risk" to spot the many problems with this, do these banks not risk being embarassed by their commitment to enhanced disclosures, when the tools are finalised? Or are the banks judging that they can use this UNEP-FI commitment to look busy and deflect challenges about climate inaction for a couple more years?

A recent report from the International Energy Agency, “Perspectives for the energy transition”, flags the need not just for trillions of dollars of additional investment in energy efficiency, low-carbon energy and associated infrastructure before 2050, but for at least $23 trillion of investments in fossil fuels to be avoided, if we are to have a 66% chance of limiting global temperature increases to within 2 degrees. The lack of overlap between those banks finally quitting project finance for coal and those supporting greater transparency suggests a pervasive lack of joined-up thinking in the sector. Progress on disclosure and transparency from banks is welcome, but it needs to go hand in hand with pulling money out of dirty energy and instead financing the transition.