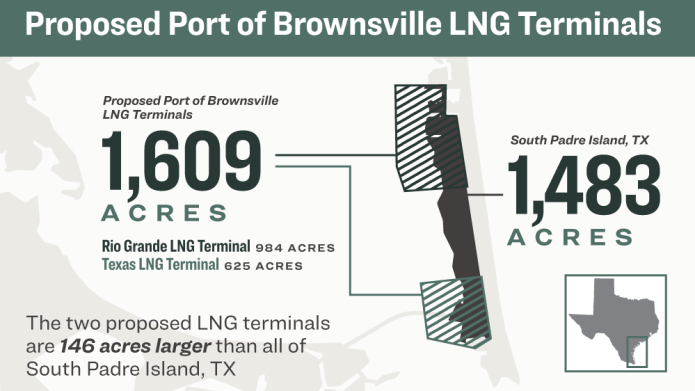 This is a guest blog from Rainforest Action Network

Rio Grande Valley LNG and Texas LNG, if built, along with the Rio Bravo pipeline, would pave over a “greenfield” of undeveloped wetlands, pollute nearby wildlife refuges, and divide a national wildlife corridor, transforming sites near the Port of Brownsville into industrial-scale export hubs complete with storage tanks, flare stacks, and explosion risks. 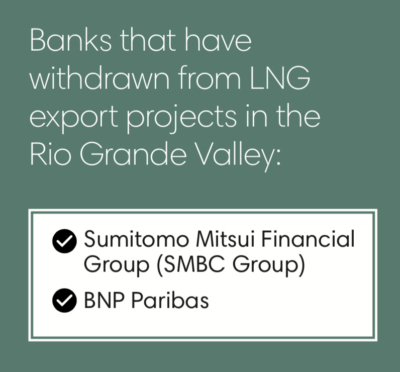 The successful community organizing and unstable gas market had led to the cancellation of the Annova LNG project in 2021, two banks leaving the Rio Grande project, and several more banks developing exclusion policies for LNG. Community leaders won a major legal victory also in 2021, requiring federal regulators to re-evaluate the environmental justice and climate impacts of the proposed build-out. The terminals would be situated in a community that is 94% Hispanic or Latinx, 80% Spanish speaking, and in which nearly 28% of the population lives in poverty. The region already struggles with major health disparities, and is at high risk from climate change impacts.

In addition to environmental justice impacts, the proposed Texas LNG facility would be located on the Garcia Pasture, an ancestral burial site of the Carrizo Comecrudo Tribe listed by the World Monuments Fund as endangered and irreplaceable. The United Nations Declaration on the Rights of Indigenous Peoples demands protection of sacred sites and indigenous cultural resources. Texas LNG did not consult the Carrizo Comecrudo tribe, native to the South Texas Rio Grande Delta, and therefore did not obtain their Free Prior Informed Consent. 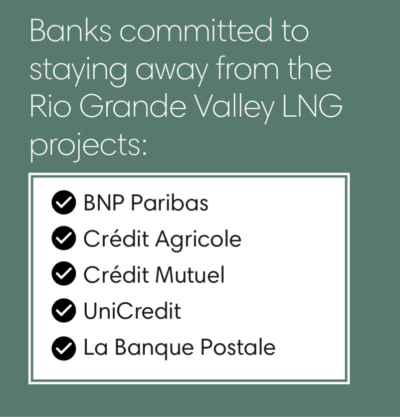 These projects are also disastrous to our shared climate. The two terminals and pipelines would spew as much greenhouse emissions as approximately 40.4 million cars on the road per year. These terminals are relying on corporate lies and false solutions like carbon capture and sequestration to make the climate budget work on paper. Any new fossil fuel expansion goes directly against climate science. The build out of these two terminals would lock the Gulf Coast into further dependence on fossil fuels for at least two more decades. 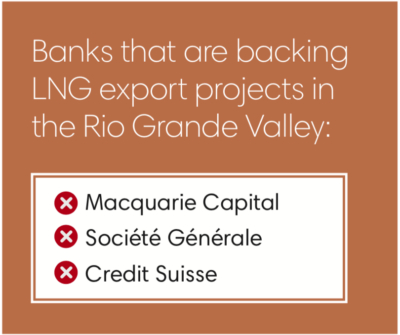 RAN with Sierra Club and local and international partners are putting direct pressure on the banks supporting these two disastrous fracked gas projects, including Macquarie Capital, Société Générale, and Credit Suisse. Many banks and financial institutions have declared time-bound commitments to meet net zero emissions by 2050. Financial support for new fossil fuel projects, especially greenfield projects, would be in direct opposition to any 2030 target or 2050 net zero emissions goal. Big banks have no business funding LNG-fueled destruction in the Rio Grande Valley.

LNG Terminal
There are no projects active for this item now.
on record