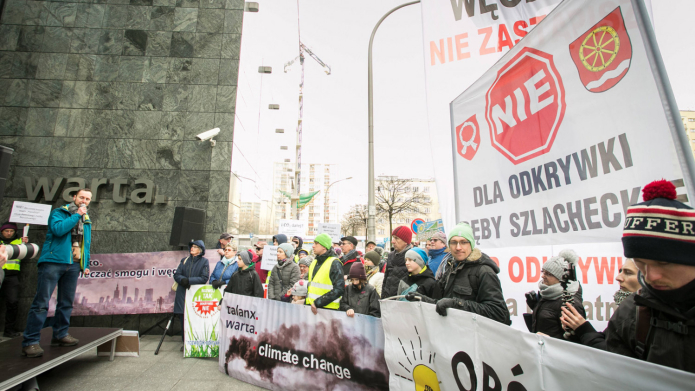 This is a guest blog post by Kuba Gogolewski of Development YES Open-Pit Mines NO​.

Despite coal’s growing ‘pariah’ status due to its public health and climate impacts, and not forgetting tightening European regulatory requirements, Polska Grupa Energetyczna S.A. (PGE), Poland’s biggest producer of electricity, is still defiantly planning an almighty splurge of new coal expansion investments in both mining and burning. And this also despite worsening economic headwinds blowing directly in its face, as confirmed by company results for 2018 published this week.

PGE’s current hit list includes the development of the huge Złoczew greenfield mine, with an estimated price tag of EUR 2.3-3.5 billion. If it were to go ahead – and PGE says it intends to make an investment decision by 2020 – Złoczew would imply that PGE wants to continue operating its Bełchatów lignite power plant, the biggest source of CO2 in Europe, beyond 2030. Earlier this month, environmental lawyers ClientEarth launched a legal challenge against Złoczew.

On top of this, PGE has also confirmed (in response to a question I asked during its annual shareholder meeting in June last year) that it is still pursuing another giant lignite greenfield open-pit mine – Gubin 2 – which would be costlier than Złoczew if built and would require a new lignite plant to adjoin it.

And then there is the highly controversial, 1000 megawatt Ostrołęka C coal plant. PGE has announced that it has started talks with two other Polish companies ENERGA and ENEA on Ostrołęka C, which could involve the company taking a EUR 250 million stake in the project. PGE also has the Opole and Turów coal plants currently under construction.

Which financiers would be willing to help PGE take this coal extravaganza shopping list on?

For one thing, the company will shortly have to pay back some of its previous benefactors. By the end of April this year, PGE has to settle a EUR 435 million revolving debt facility with a consortium comprising BNP Paribas, Société Générale, ING, Citi Bank (Bank Handlowy w Warszawie S.A), Commerzbank (mBank), Banco Santander, PKO BP and PeKaO S.A. ING has already confirmed that it will not be renewing the facility. A further June 9th deadline is also looming for PGE to buy back eurobonds worth EUR 500 million.

And PGE’s worsening economic position was further revealed this week with the publication of its financial results for 2018 which, taken together with its Management Board report, provide a grim snapshot of the company's short and mid-term prospects.

Three numbers best capture PGE's current predicament. First, net profits were down 42% (by EUR 260 million) year on year to EUR 354 million. Second, PGE’s short-term debt shot up by 36% in 2018, reaching EUR 2.94 billion. Third, the financial results showed stable investment levels in 2018 for conventional energy generation (mostly coal power plants and CHPs) as well as over EUR 1.1 billion in commitments locked in for future investments, again mostly for conventional generation. So a drastic change of trajectory and diversification of PGE’s energy mix is for now not looking like a matter of years but rather decades.

Significantly too, although there is no mention of the Gubin 2 mine project in the 2018 reports, it is still part of the PGE strategy up to 2020 and the company hasn't officially ruled it out. It has disclosed that Bełchatów unit one will be decommissioned as of July 1, 2019, as will two units at Dolna Odra in 2020 and one unit at Rybnik in 2021.

This heavy profits fall is likely to to be the shape of things to come for PGE. The central warning of a June 2018 report from IEEFA appears to be materialising already: "new air pollution regulations coupled with rising carbon prices put Poland’s biggest utility, PGE, at serious risk of financial disarray if it continues to pursue a coal-heavy upgrade strategy".

That report also pointed out the dire economic implications in terms of European Emission Allowances (EUA) that are stacking up for PGE because of its heavy reliance on coal and lignite generation – with more than 90% of its electricity derived from coal production it is well ahead of Europe’s other most coal-exposed utilities, RWE with 51% and CEZ with 45%. The report authors assumed a very conservative trajectory for EUA prices, keeping it stable at the level of EUR 15 per tonne. Even then at this low end, as they demonstrated, it would be EUR 3 billion cheaper for PGE to stop all new coal investments and change tack to 100% renewable energy generation by 2050.

Further factors expected to eat into future PGE profitability are increased competition from both cheaper electricity imports from abroad and increasing renewable energy generation in Poland which is pushing down wholesale electricity prices. Moreover, PGE can expect further deterioration on the debt side – as financing for such coal heavy utilities like PGE is becoming more expensive and harder to attract, PGE will need to pay more for its debt and will have less capital of its own for future investments.

In this darkening economic context, the coal expansion answers given to me at the company’s shareholder meeting last year might be best described as financial science fiction.

Further new financial realities are also bearing down on PGE – if it wants to break ground on and develop new coal infrastructure it will need a lot of insurance cover.  Yet in 2018 six major European insurers and reinsurers stopped or limited underwriting and reinsurance for new coal and lignite projects.

Zurich and Axa were the first insurers to adopt policies stopping insurance cover for all new mines and plants in 2017, and Allianz, Ergo and Generali followed in 2018. In 2019 already the Austrian Vienna Insurance Group (VIG), the owner of Gothaer and Interrisk which are active in the Polish coal sector, has also stopped insuring coal, and UNIQA and the Spanish company MAFRE are set to follow imminently.

So out of eight underwriters involved in the Polish coal sector, both new and existing, there are only two – Polish PZU and German TUiR Warta – which have still not ruled out underwriting the Złoczew or Gubin 2 mines. The two biggest reinsurers – Swiss Re and Munich Re – have also stopped reinsuring new coal mines and plants and the French company SCOR doesn't reinsure lignite plants and coal and lignite mines. VIG's new policy also covers reinsurance.

PGE is becoming caught in a perfect storm, yet it is not doing itself any favours more generally. It has failed to provide a Paris compliant business strategy, saying only that it will prepare one by 2020 – on current form that too may resemble science fiction if and when it appears.

With the financial noose tightening around its neck, all banks approached by PGE for either loans or the underwriting of bonds should think twice about the reputational risk of being associated with this clear-cut coal addict.

In September last year, PGE managed to obtain some financial breathing space via a scandalous EUR 950 million corporate loan from Santander, Intesa SanPaolo, Japan’s MUFG and Poland’s PekaO. These banks will be foremost on the radar of campaigners as we enter the commercial banking sector’s AGM season.