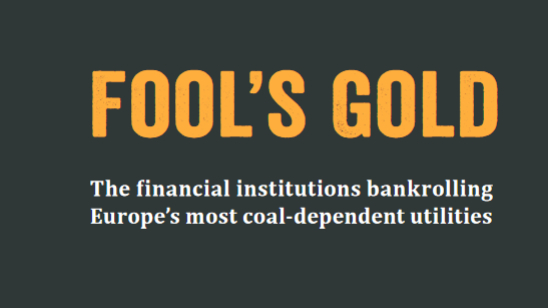 Eight financial institutions have handed Europe’s most polluting utilities almost €16 billion in support since the Paris Agreement was signed in December 2015, a new briefing by Europe Beyond Coal and its partners BankTrack, Foundation Development YES – Open-Pit Mines NO, Friends of the Earth France, IIDMA, Re:Common and urgewald has found.

Fool’s Gold – the Financial Institutions Bankrolling Europe’s Most Coal-dependent Utilities ranks European financial institutions for their exposure to coal, and shows that the Norwegian Government Pension Fund is the most exposed to coal assets with €2.29 billion in shares and bonds, followed by Crédit Agricole with €1.04 billion, Deutsche Bank with €0.69 billion and Standard Life Aberdeen with €0.58 billion. On the creditor side, UniCredit was the largest bank providing €3.13 billion in loans and underwriting services. Santander follows with € 2.99 billion, Barclays with €2.71 billion and BNP Paribas with €2.57 billion. Combined these “exposed eight” have handed the coal industry as much financial support in the last three years as the European Union has allocated to its space programme for 2021-2027.

Kaarina Kolle, Finance and Utility Coordinator at Europe Beyond Coal, said: “After the Paris Agreement you would have to be living on another planet to think that investing any money in coal is a good idea. Some financial institutions apparently think they do operate in a different world, and are willing to risk their reputations and financial returns on it. In reality here on Earth: any financial ties to polluting utilities that aren’t being used to push for a coal phase out are a problem for everyone. Financial institutions have a responsibility to help secure a 2030 coal phase out in Europe from utilities, and if they cannot then to cut all financial ties with them."

Coal utilities enjoying continued support from these financial institutions include RWE, PGE, EPH, Fortum/Uniper, ČEZ and Enel/Endesa. Together they are responsible for more than half of all EU coal-based CO2 emissions and health impacts from polluted air. Shutting down their coal plants by 2030 at the absolute latest is necessary to fulfill Europe’s climate commitments.

Katrin Ganswindt, urgewald Climate Campaigner, said: “The amount of capital that is still being directed to maintain coal in the European power mix is staggering. But not a single investor or creditor in their right mind should think that coal has a future. The reality is: what was once considered to be a golden investment is now a foolhardy one. Those sticking to coal will be left with nothing but stranded assets.”

Report methodology  The research on supporters of Europe’s most polluting utilities has been commissioned by Europe Beyond Coal and was conducted by Profundo. Data was extracted from the Bloomberg Terminal and Thomson EIKON, both accessed February 2019.  The research resulted in a ranking of banks for their financing activities, loans and underwriting, and a ranking of institutional investors with their exposure to shares and bonds.  Exempted from the research are non-financial-corporate, individual, government or municipal owners. The timeframe is 2016-2018, though for shares and bonds only the  recent filings were included.