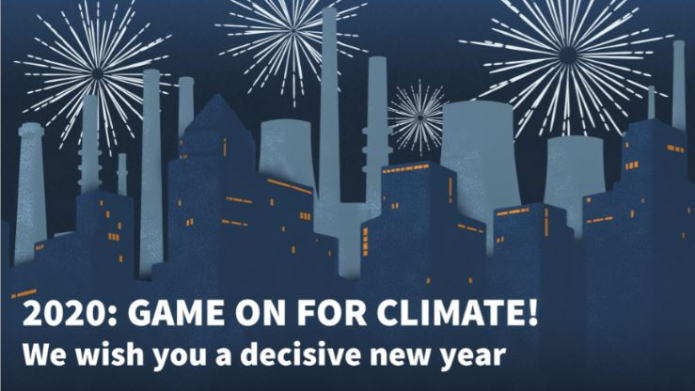 2020 Game on for climate. Photo: BankTrack

As we approach the end of 2019 and head into a new decade, it's time to take a moment to reflect on the year gone by and consider the challenges to come. We've compiled ten of our 2019 highlights below, to celebrate what we’ve achieved this year, as always working closely together with many allies around the world. While we're proud of these achievements, the challenges we all face for 2020 feel immense.

The next decade, and the next few years in particular, are make-or-break for climate change, as we know from the UN's Special Report on Global Warming of 1.5 °C. Yet, despite 25 years of talks under the UN climate umbrella, there is still no sign of emissions peaking. Worse, 2019 has seen nationalist movements that are often hostile to climate science consolidate their power in many countries, and the Madrid Climate Conference did not see countries dramatically scaling up their ambition. There are sources of hope, like the growing youth-led movement for climate justice, but the window for action is closing.

A large part of the banking sector's answer this year was the launch of the Principles for Responsible Banking (PRBs), which together with the new version of the Equator Principles formed major 2019 landmarks on the financial landscape. The commitments in the PRBs are welcome, particularly the headline commitment for banks to align their business models with the Paris Agreement and Sustainable Development Goals – but with PRB banks like Citi and Credit Suisse prepared to support deals like the Saudi Aramco IPO and ICBC remaining the world’s number one financier of coal power expansion companies, this UN-sponsored initiative looks so far like yet another green smokescreen. And despite the massive and sustained effort that BankTrack led to influence the new Equator Principles, the result fell short of a robust response to the unfolding climate crisis – far short.

If sector-wide initiatives are not cutting it, some banks are making encouraging moves on their own. The trend towards more and stronger coal exclusions continued in 2019 and have begun to be extended to other fossil fuels like Arctic oil. There were two high-profile examples just this week from Goldman Sachs and Standard Chartered. Banks will need to step up the scale of these efforts dramatically in the year to come.

For BankTrack, 2019 was first and foremost about spreading the message of our Fossil Banks, No Thanks! campaign – that it is time for banks to move beyond coal and realise that finance for all new fossil fuel projects has to come to an end, and soon. In November, the European Investment Bank led the way for publicly owned multilateral banks with its rapidly achieved and almost total pull out of fossil fuel finance. So which of the big commercial banks will lead the way for the private sector?

Next year’s UN climate conference in Glasgow will focus on a global stock-take and further strengthening of climate commitments, and we'll be making sure that the banking sector commits to do its part by starting to phase out fossil fuel financing in earnest. Between now and next November, we will be taking the case to banks with all of the urgency that the situation and the science demands.

With best wishes for the new year ahead,
The BankTrack team (Johan, Greig, Raymon, Erik, Naomi, Daisy and Ryan).

The Fossil Fuel Finance Report Card 2019, released in March by BankTrack and allies, revealed that 33 global banks have provided USD 1.9 trillion to fossil fuel companies since the adoption of the Paris climate accord in 2015. The amount of financing has risen in each of the past two years. The research has been a powerful driver of subsequent campaigning, even being referenced by Greta Thunberg at the recent UN Climate Change Conference in Madrid.

The myth of client confidentiality exposed

Also in March we published an analysis of five years of correspondence with 31 major international banks on problematic projects they finance, and found that in nearly half of all responses banks said they could not comment on whether they had a relationship with a particular customer or project. Banks were urged to write the right to disclose client relationships into their contracts, particularly for high risk deals.

Bringing the "Fossil Banks, No Thanks!" message to AGM season

From April to June, as part of our global Fossil Banks, No Thanks! campaign, BankTrack was present inside and outside 17 bank annual general meetings in nine countries, urging banks to commit to end financing for the fossil fuels industry. We were joined by campaigners and activists from at least 25 other organisations. See our summary here.

As the Principles for Responsible Banking were launched in September we welcomed the initiative but expressed significant reservations about what these new principles are going to concretely deliver for people and planet. We will be keeping close watch, and judging the initiative on its results. Our Director Johan Frijns was also present at the launch, and intervened to call on the banks to address the 'big F-words', fossil fuels.

In October, the OECD released new guidance on responsible lending and underwriting for banks, after an extensive multi-stakeholder process which BankTrack joined. As we outlined in an analysis of the paper with OECD Watch, the guidance marked a step forward in the international normative framework that aims to encourage responsible conduct by banks and others in the financial sector.

In November, BankTrack published its third Human Rights Benchmark. It showed that most banks are still failing on human rights nearly a decade after new UN principles were established to guide their behaviour. The report ranks 50 commercial banks from leaders to laggards according to their efforts to uphold human rights.

In November we joined a coalition of environmental groups to warn banks to stay away from organising a massive share offering for the world’s largest corporate emitter of carbon dioxide, Saudi Aramco. Banks’ willingness to raise billions of dollars for a state-owned Saudi company was also criticised, given the Kingdom’s horrendous record on human rights. The IPO went ahead, but foreign investors stayed away.

Also in November, BankTrack led a passionate call from 325 civil society groups from 58 countries for Equator banks to ‘act with courage and ambition’ and take bold action on climate change and human rights. We gave it our best shot, but the Equator Principles Association opted for continuing with business as usual.

In December we assessed where banks stand on fossil fuels, finding that none of the world’s largest banks have policies and timelines in place to phase out their financing for the fossil fuel industry as a whole, despite ever more urgent calls for decisive action on the climate emergency.

We reveal the top financiers of new coal power development

Also in December, BankTrack, urgewald and other partner NGOs published new research identifying the top financiers and investors behind the expansion of the world’s coal plant fleet. Over the past 3 years, financial institutions have channeled USD 745 billion to companies planning new coalpower plants.