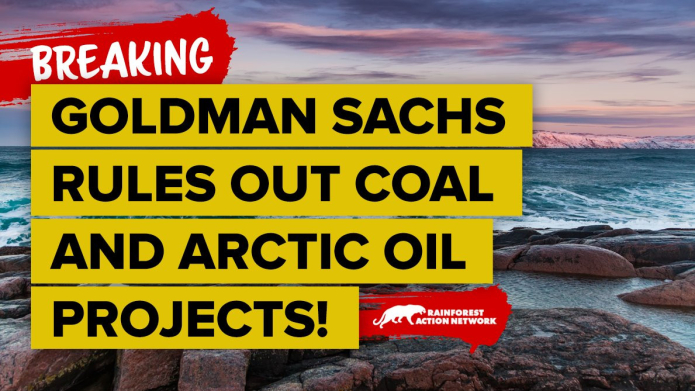 Today, Goldman Sachs announced the strongest fossil finance restrictions of any major U.S. bank, though it still lags behind its leading global competitors. It also remains far from alignment with what is needed to limit climate change to 1.5 degrees Celsius.

Goldman Sachs has ruled out direct finance for new or expanding thermal coal mines and coal-fired power plant projects worldwide, as well as direct finance for new Arctic oil exploration and production. The policy makes explicit mention of protecting the Arctic National Wildlife Refuge. The bank has also committed to a phase out of financing for significant thermal coal mining companies that do not have a diversification strategy.

While other major U.S. banks have committed to reducing credit exposure to coal mining, their approach restricts only lending, ignoring the large amounts of capital the banks facilitate for the coal industry from the underwriting of issuances of stocks and bonds. Goldman Sachs’s new policy tightens the screw on thermal coal by (1) including underwriting, and (2) explicitly committing to phase-out, not just reduction.

“By ruling out direct finance for Arctic oil exploration and production, Goldman has established the first no-go zone for a major U.S. bank in the oil and gas sector. Goldman Sachs’s updated policy shows that U.S. banks can draw red lines on oil and gas, and now other major U.S. banks, especially JPMorgan Chase –– the world’s worst banker of fossil fuels by a wide margin –– must improve on what Goldman has done.

“The writing was already on the wall for coal financing. Goldman Sachs’s new policy puts that writing in flashing neon. A commitment from what is considered by its peers as the most prestigious investment bank on Wall Street to exit financing for thermal coal mining companies will accelerate coal becoming completely unbankable.

“This new policy from Goldman Sachs raises the bar for other U.S. banks if they want to be taken seriously on climate change. The policy comes after years of work from RAN and many others to highlight the role of Goldman Sachs and other banks in causing climate change through the hundreds of billions of dollars they pour into the fossil fuel industry.

“The prohibition on financing the oil industry’s desecration of the Arctic Refuge is due to tireless Indigenous-led resistance, including crucial advocacy by the Gwich’in Steering Committee.

“Major U.S. banks have been grossly lagging behind their global peers in restricting fossil fuel finance: European banks have the strongest policies, and Asian banks have been making the most rapid recent progress. Going forward, Goldman Sachs must continue strengthening its fossil finance policy, but for now it has shown that U.S. banks can start to close the fossil policy gap. Now it’s time for its Wall Street peers to step up.

“The smart money on Wall Street is drawing red lines on oil and gas, and exiting coal. The big money has to respond, or it will be left holding the bag. Over to you, Jamie Dimon and JPMorgan Chase.”