BankTrack, Urgewald, IIDMA, 350.org and other partner NGOs have published new research identifying the top financiers and investors behind the expansion of the world’s coal plant fleet. Following today’s release of the data, BankTrack, Urgewald and other NGO partners will discuss the research findings and provide further insights at a press conference at the summit on Monday, Dec 9th at 5:30pm.

“The UN Secretary General, the IPCC and climate scientists worldwide have time and again called for a speedy phase-out of coal-based energy production, but most financial institutions are still turning a deaf ear. Over the past 3 years, financial institutions have channeled US$ 745 billion to companies planning new coal power plants,” said Heffa Schuecking, director of Urgewald.

The NGOs’ new data covers both lending and underwriting between January 2017 and September 2019 for all 258 coal plant developers identified on Urgewald’s Global Coal Exit List. Altogether, there are still over 1,000 new coal power stations or units in the pipeline. If built, these projects would add 570 GW to the global coal plant fleet, an increase of 28%.

“Most of the top banks providing loans or investment banking services to these companies acknowledge the risks of climate change, but their actions are a slap in the face to the Paris Climate Agreement,” said Greig Aitken, climate campaigner at BankTrack.

Since January 2017, 307 commercial banks have provided US$ 159 billion in direct loans to coal plant developers. The top 3 lenders are the Japanese banks Mizuho (US$ 16.8 billion), Mitsubishi UFJ Financial Group (US$ 14.6 billion) and the Sumitomo Mitsui Banking Corporation (US$ 7.9 billion). The 4th and 5th largest lenders to coal plant developers are Citigroup (US$ 5.7 billion) and BNP Paribas (US$ 4.3 billion).

A regional breakdown of the data shows that Japanese banks accounted for 32% of direct lending to coal plant developers since 2017.

Shin Furuno from 350.org Japan said: “Japan’s top three banks are undermining the Paris Agreement and tarnishing their reputations as the world’s biggest lenders to coal plant developers. Global banks must align their portfolios with the Paris climate goals by ending finance for the coal sector altogether and actively funding the transition towards a zero carbon future.”

European banks are, however, not far behind. They accounted for 26% of all bank loans to coal plant developers since 2017.

Greig Aitken from BankTrack commented: “This shows how insufficient the climate policies still are at the vast majority of banks. While leading European banks like BNP Paribas and Barclays rule out direct project financing for new coal plants, these institutions continue to provide corporate loans to companies that are pushing forward new coal plants.”

The same can be said of the Spanish bank Santander, one of the main sponsors of the 2019 UN Climate Summit in Madrid.

Carlota Ruiz-Bautista, an environmental lawyer from Instituto Internacional de Derecho y Medio Ambiente (IIDMA), commened: “Santander claims it will not provide direct financing to new coal plants, but in 2018 and 2019 the bank made corporate loans totaling US$ 655 million to PGE, Tauron and Energa, three companies that are planning to build 5.7 GW of new coal-fired capacity in Poland.

“The data shows that the bank has been increasing its coal developer financing year on year since 2017. The bank may be sponsoring the UN Climate Summit, but its lending is heaping coal on the fire.” 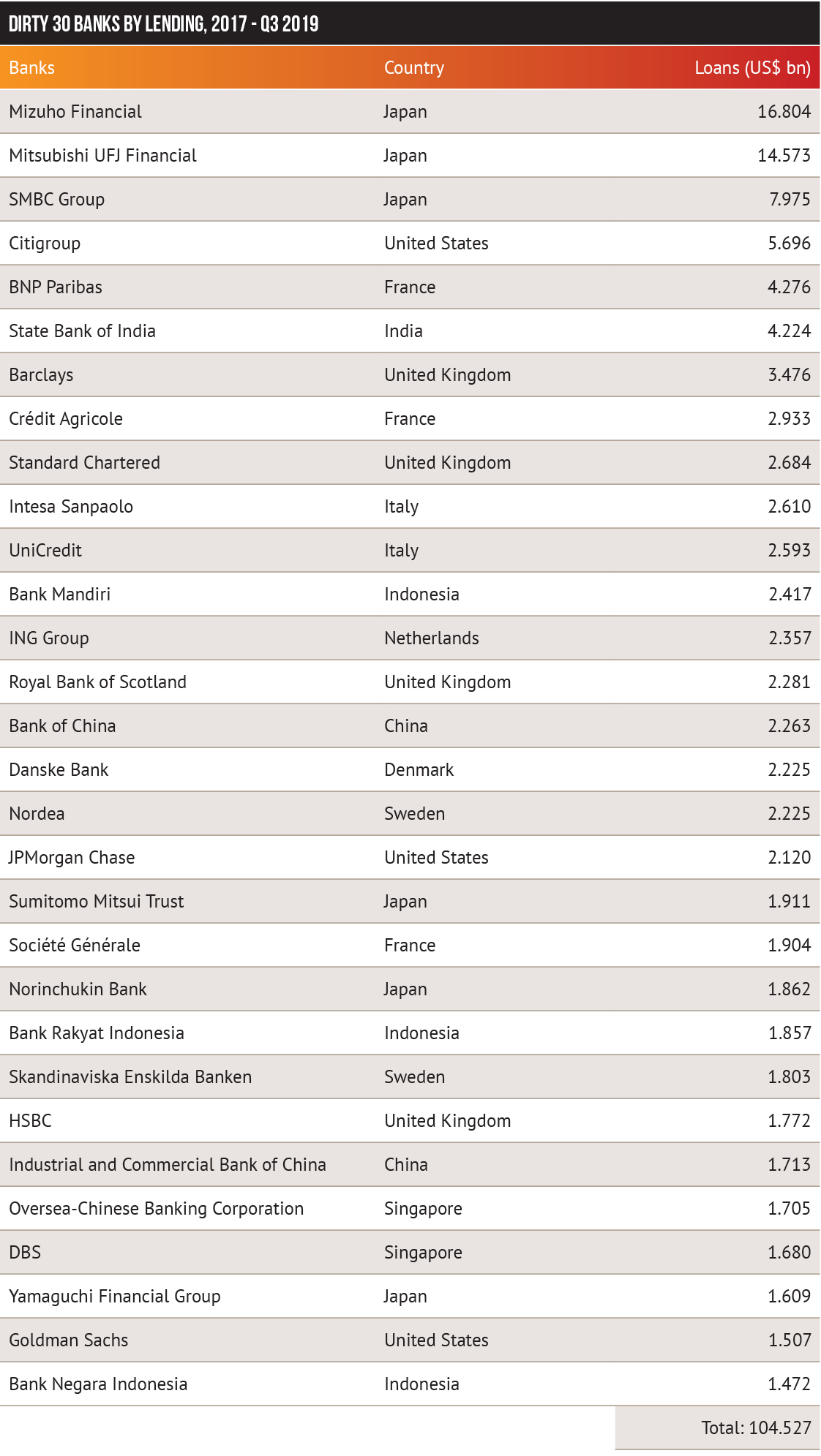 Since January 2017, 300 commercial banks have channeled over US$ 585 billion to coal plant developers through underwriting.

This figure reflects China’s dominant role in coal plant development. In addition to the 217 GW of new capacity in China’s own coal plant pipeline, Chinese companies have plans to build 54 GW of new coal capacity abroad.

Several Japanese, US and UK banks are, however, also important underwriters of coal plant developers. Among these are Mizuho (US$ 14.3 billion), Mitsubishi UFJ Financial Group (US$ 12.6 billion), Sumitomo Mitsui Banking Corporation (US$ 10.5 billion), Citigroup (US$ 8.8 billion), JP MorganChase (US$ 6.2 billion), HSBC (US$ 6.2 billion) and Standard Chartered (US$ 5.9 billion). 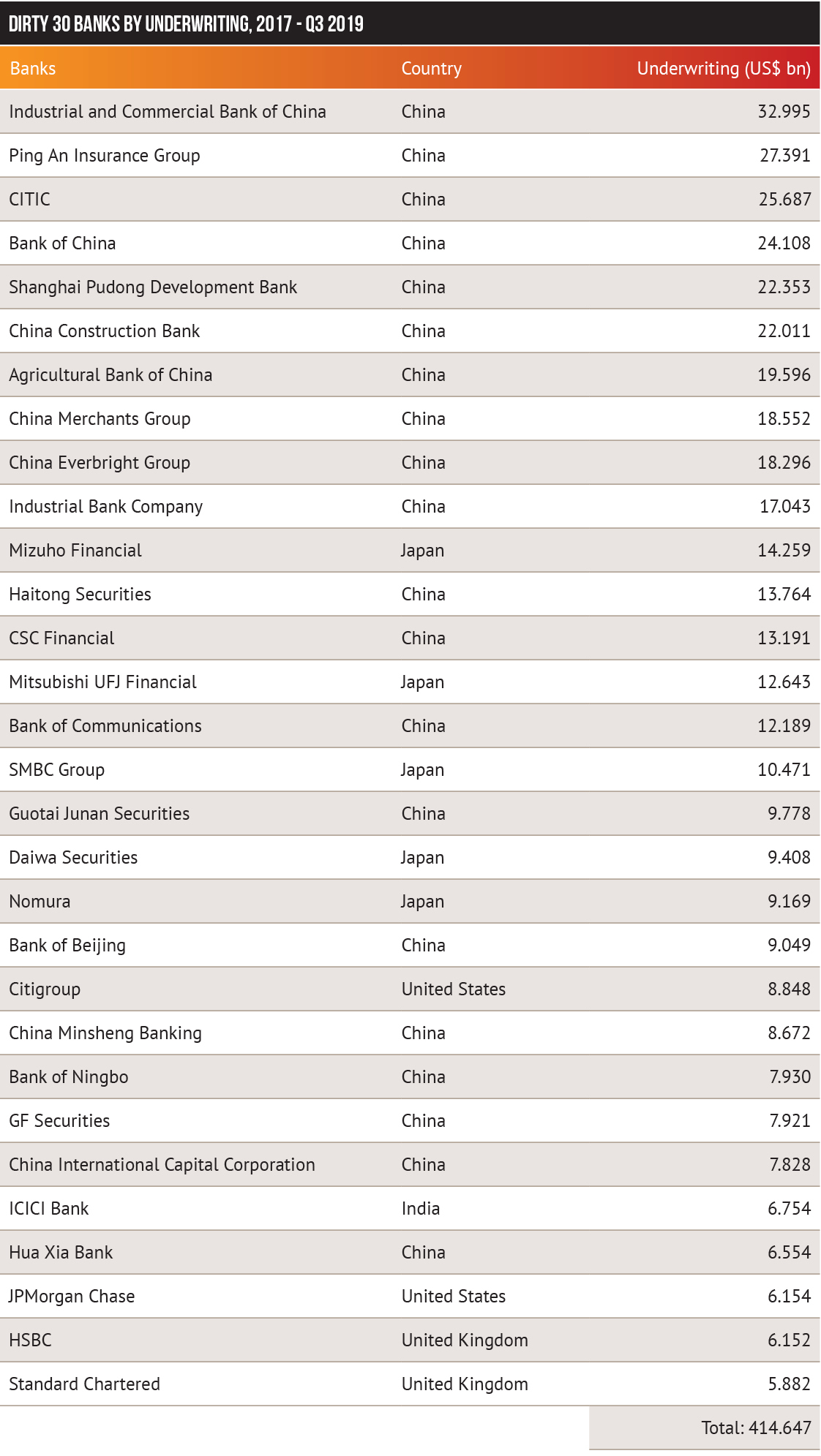 While banks play a central role in helping coal plant developers acquire capital through underwriting their share and bond issuances, the ultimate buyers of these securities are investors. For 2019, the NGOs’ research identified 1,922 institutional investors with combined holdings of US$ 276 billion in coal plant developers. 1

“The hypocrisy of investors like BlackRock is huge. Last April, the world’s largest asset manager published a new tool to help investors identify climate-related risks in their portfolio. Through its reckless investments in coal plant developers, BlackRock, however, plays a major role in fueling these risks,” comments Doug Norlen of Friends of the Earth US.

What needs to be done?

According to the 2018 IPCC Report, coal-based energy production must be reduced by 78% by 2030 if we want to keep the 1.5°C target within reach. And each new coal power plant is a further stumbling block towards achieving this goal. The UN Secretary General, Antonio Guterres, has therefore used each and every opportunity to make public appeals for “no new coal by 2020”.

Some financial institutions have begun to heed this call. In November 2019, the French insurance giant, AXA, announced that it will stop insuring or investing in companies that plan to build over 300 MW of new coal-fired power capacity or develop new coal mines.

“These examples show what needs to be done,” said Schuecking. “Financial Institutions that continue channeling money to coal plant developers are actively working against the Paris Climate Goals and ruining our chances for a livable future.”

1. Among the institutional investors covered in this research are pension funds, insurance companies, mutual funds, asset management companies, sovereign wealth funds and asset management arms of banks. It is likely that the investments of these institutions in coal plant developers are, in fact, significantly higher than indicated. Financial databases’ coverage of bond holdings is often incomplete and many pension funds do not report their holdings.