Home › News
Groundbreaking research reveals the financiers of the coal industry
Today, Urgewald & partners published an analysis of the financiers & investors behind the entire coal industry for the 1st time. One of the shocking results was that banks provide more money to coal than in 2016.
By: urgewald & Reclaim Finance
2021-02-25 Contact: 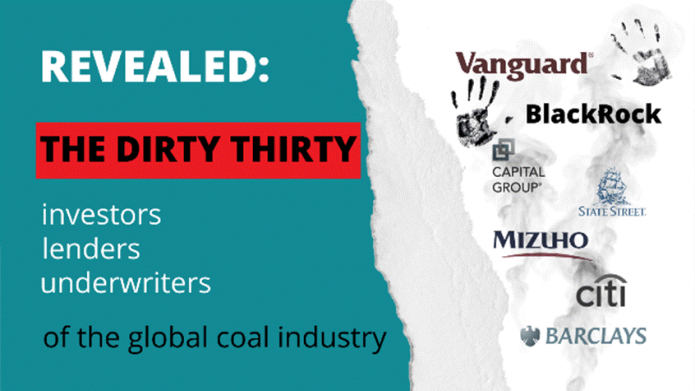 Today, Urgewald, Reclaim Finance, Rainforest Action Network, 350.org Japan and 25 further NGO partners published groundbreaking research on the financiers and investors behind the global coal industry. “This is the first time anyone has attempted to analyze commercial banks’ and institutional investors’ exposure to the entire coal industry. In past years, the scope of our financial research was limited to around 200 coal plant developers. Our new research, however, analyzes financial flows to all 934 companies on the Global Coal Exit List (GCEL),” says Katrin Ganswindt, head of financial research at Urgewald.

“While many large EU investors have begun screening coal companies out of their portfolios, the vast majority of US investors have refused to adopt coal exit policies. Our research underscores how dire the consequences of this failure are,” says Katrin Ganswindt. “We welcome President Biden’s Executive Order to end public financing for fossil fuels abroad, but the new administration must also address the role of Wall Street as a huge driver of climate pollution around the world. Its massive investments in the coal industry are driving us ever deeper into a climate crisis,” comments Paddy McCully, Climate and Energy Program Director at Rainforest Action Network.

With holdings of USD 81 billion, investors from Japan account for the second highest share of institutional investments in the coal industry. Japan’s Government Pension Investment Fund alone holds bonds and shares in value of USD 29 billion in companies listed on the GCEL. The third largest group are UK investors, whose collective holdings in the coal industry amount to USD 47 billion. “While the UK government recently announced that it will end public financing for overseas fossil fuel projects in 2021, most UK institutional investors have not even begun to expel coal from their portfolios. Unless they do their homework soon, the UK-hosted COP 26 will become a big embarrassment for these institutions,” states Katrin Ganswindt.

The Biggest Lenders to the Coal Industry

“The coal policies adopted by Japanese banks are among the weakest in the world. They only cover a small portion of banks’ lending and do not rule out corporate loans or underwriting for companies that are still building new coal plants in Japan, Vietnam, the Philippines and elsewhere. Japan’s banks must stop pouring fuel on the fire and finally adopt comprehensive coal exclusion policies,” says Eri Watanabe from 350.org Japan.

A regional breakdown of lenders from different countries shows that Japanese banks collectively provided USD 76 billion in loans to the coal industry between October 2018 and October 2020. Next in line are banks from the United States (USD 68 billion) and banks from the UK (USD 22 billion). Commercial banks from these three countries alone accounted for 52% of total lending to companies on the Global Coal Exit List over the past two years.

The Biggest Underwriters of the Coal Industry

Over the same time period, 427 commercial banks channeled over USD 808 billion to companies on the Global Coal Exit List through underwriting. The world’s top 10 underwriters are all Chinese financial institutions. The big 5 are in descending order, the Industrial and Commercial Bank of China (USD 37 billion), the China International Trust and Investment Corporation (USD 32 billion), the Shanghai Pudong Development Bank (USD 28 billion), the Bank of China (USD 24 billion) and the China Everbright Group (USD 23.7 billion).

Commercial Banks’ Support for the Coal Industry has Increased since Paris

The NGOs’ research also examined the development of banks’ lending and underwriting for the coal industry since January 2016. While direct lending for coal companies spiked in 2017, subsequent years show a downward trend in lending volumes. Underwriting of coal industry shares and bonds, however, has grown steadily since 2016. The alarming result of this analysis is shown in the graph below: Commercial banks’ are channeling more money to the coal industry than in 2016, the year after the Paris Climate Agreement was signed.

In 2016, banks provided USD 491 billion through lending and underwriting to companies listed on the GCEL. By 2019, this amount had grown to USD 543 billion, an increase of almost 11%. For 2020, the NGOs’ dataset only covers the period between January 1st and October 31st, but a comparison with the first 10 months of the preceding years indicates that commercial banks’ total support for the coal industry in 2020 was likely at least as high as in 2019. In spite of the COVID-19 pandemic, banks’ lending and underwriting for the coal industry amounted to USD 456 billion in the first 10 months of 2020. This is USD 3 billion more than were provided during the same reference period (USD 453 billion between January 1st and October 31st) in 2019.

“These numbers provide a sobering reality check on bank’s climate commitments,” says Yann Louvel, policy analyst for the NGO Reclaim Finance. Reclaim Finance maintains an online “Coal Policy Tool” that tracks and ranks all coal policies announced by financial institutions. According to its tool, 88 commercial banks have now adopted a coal policy, but out of this total only 4 banks have adopted “robust” coal exclusion policies.

“The new financial data confirms the findings of our Coal Policy Tool: The vast majority of banks’ coal policies have so many loopholes that their impact is almost meaningless,” says Louvel. A case in point is Citigroup, which announced in April 2020 that it will phase out coal mining by 2030. “This policy has zero impact on Citigroup’s enormous support for coal power producers and coal plant developers. And if you read the small print, the phase-out only applies to companies that generate at least 25% of their revenues from thermal coal mining, thus letting large diversified coal miners slip out of the net. Sadly, this kind of evasion is par for the course,” explains Louvel.

What needs to be done?

Ending the era of coal means ending the era of coal finance and investment. But the time to accomplish this task is quickly running out. “Vague net zero announcements for 2050 - an entire generation into the future - are masking financial institutions’ refusal to take decisive action now. The bulk of coal financing and investment must be ended before 2030. This is the decade that counts,” says McCully. The NGOs’ research shows that the bulk of coal investment, lending and underwriting can be traced to financial actors in a dozen countries. “If we do not move financial actors in the US, Japan, China, the UK and other key countries to exit coal soon, they will propel us into a future where the Paris climate goals are no longer within reach,” warns Ganswindt.

“What we need are comprehensive, immediate coal exit policies. Insurers such as AXA, banks like Crédit Mutuel, UniCredit and Desjardins or asset managers like Ostrum have already shown what must be done by excluding most of the companies on the Global Coal Exit List from their portfolios. Now is the time for the finance industry to act. A speedy exit from coal finance and investment is not only do-able and desirable, it is a question of survival,” says Louvel.