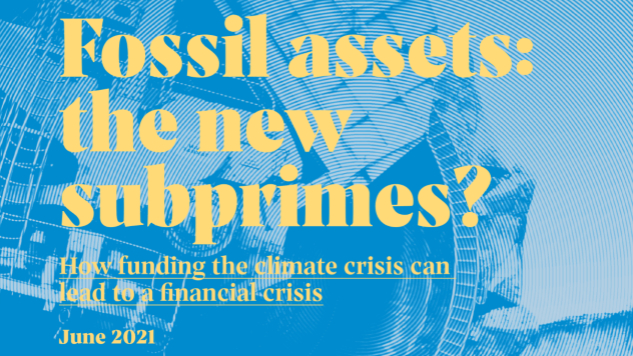 A new report by the Rousseau Institute, Friends of the Earth France and Reclaim Finance, and endorsed by 12 civil society organizations including BankTrack, reveals that major European banks accumulated EUR 532 billion in fossil fuel assets (1) – representing 95% of their total equity – and would struggle to put up with a sudden drop in their value. The authors underline the threat such a situation poses to the transition to a low-carbon economy, potentially snowballing into a financial crisis, with severe economic and social impacts. To remedy this situation, they call for State, financial regulator and central bank intervention. They put forward key regulatory and legislative measures and advocate for the creation of a European “fossil bank” to sustainably manage the fossil fuel phase-out.

The report studies the balance sheet of the 11 largest banks in the Eurozone (2). It reveals that they accumulated a stock of EUR 532 billion in assets directly linked to coal, oil and gas. This stock amounts to 95% of their total equity (3). These fossil fuel assets represent a very large proportion of the equity of all banks studied, ranging from 68% for Santander to 131% for Crédit Agricole.

Paul Schreiber, Campaigner at Reclaim Finance and co-author of the report, notes: “While 84% of the explored fossil fuel reserves will have to be left unexploited (4) to limit global temperatures rise to 1.5°C, thus becoming effectively stranded, European banks support companies developing new plants, mines and wells to the tune of tens of billions. In doing so, they bluntly disregard both the ongoing environmental catastrophe and looming financial unrest. If they try to hide behind the development of a so-called “sustainable” finance that can easily turn to greenwashing, it will not magically make fossil fuel emissions nor the financial risk they represent disappear. Strong financial regulation is a must to both enable the transition and consider climate risks.”

The report shows that, if fossil fuel assets were to lose 80% of their value, in the event of a rapid green transition and much like subprimes in their time (5), Crédit Agricole and Société Générale would not have sufficient equity to cover their losses and the equity of the German Deutsche Bank and Commerzbank would almost be exhausted. Any significant value loss would severely impair the capacity of the 11 banks studied to finance the ecological transition and weaken their financial strength. This is all the more serious given that fossil fuel assets are only the tip of the iceberg when it comes to activities exposed to climate risks (6).

Lorette Philippot, campaigner at Friends of the Earth France and co-author of the report, comments: “Despite having on paper some of the most advanced sectoral policies, supposed to restrict financial services to fossil fuels (7), BNP Paribas, Société Générale, Crédit Agricole and BPCE hold a total EUR 260 billion of fossil fuel assets, equivalent to an astounding 106% of their equity. This although French banks are already known to be today the biggest European funders of fossil fuels (8). This is yet more evidence that financial institutions’ stricty voluntary commitments are utterly insufficient to address the climate crisis. Mandatory rules are an imperative to meet the objectives of the Paris Agreement and avoid a potential new financial shock with dramatic economic and social consequences. France cannot keep calling itself the capital of green finance while basing its entire policy on banks’ goodwill (9).”

To handle fossil fuel stocks in a just transition approach, the report details an innovative proposal for a European “fossil bank”. Funded thanks to the intervention of the European Central Bank (ECB), this new bank would, under strict conditions – including a significant discount on the value of fossil assets –, buy a majority of fossil assets from banks and manage them to align with EU climate goals.

Gaël Giraud, honorary president of the Rousseau Institute and co-author of the report, concludes: “To address the climate crisis and help avoid another financial meltdown, we must end the fossil fuel finance frenzy and manage the progressive closure of the remaining fossil fuel assets. The European Central Bank can play a key role in this process, notably by supporting a “fossil bank” that would buy fossil assets from banks to ensure the stability of the financial system and enable the financing of the ecological transition. However, it should first put its own house in order (11), by ending the support it provides to fossil fuel companies through monetary policy and considering European climate goals in all its operations.”

1. Fossil assets are defined as all financial tools used for loans and investments linked to the exploration, extraction and distribution of coal, oil and gas resources, or the production of electricity from these sources. Assets that are indirectly linked to these fossil fuels – such as in the transport sector – are not considered.
2. The balance sheets of all the banks were studied at the level of their “Group” perimeter, except for Crédit Agricole SA whose 2019 financial data is better quality than the Crédit Agricole Group.
3. The study focuses on the Common Equity Tier 1 (CET1).
4. According to an analysis from the Carbon Tracker Initiative based on the work of the Intergovernmental Panel on Climate Change (IPCC).
5. The authors underline that the loss of value of fossil fuel assets is likely to be spread over several years but that it logically follows from the gap between current fossil fuel production plans and the remaining carbon budget.
6. A wide range of industries such as aeronautics, automotive and petrochemicals, are highly dependent on fossil fuels and will also need to quickly transition.
7. The sectoral policies of banks are notably analyzed and ranked in the Banking On Climate Chaos 2021 report. The strongest policies – while still very weak – come from UniCredit and French banks.
8. Financial data presented in the Banking On Climate Chaos 2021 report.
9. On France’s focus on voluntary commitments, see Friends of the Earth France and Reclaim Finance’s press release regarding the French proposal on reporting standards (in French only).
10. The recommendations put forward regarding monetary policy are in line with the demands of a network of NGOs and CSOs that have been pushing the ECB to act on climate and the expectations of more than 169,000 people that signed a petition on that topic.
11. Today ECB operations do not integrate climate, therefore supporting high carbon companies – including fossil fuel companies.