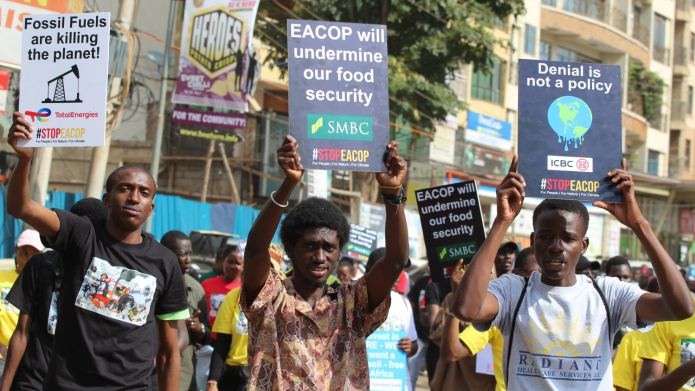 Protest against the EACOP in Nairobi, 2022. Photo: 350Africa

Five more insurers and four banks joined a growing number of firms ruling out the controversial East African Crude Oil Pipeline (EACOP) project in recent weeks, while others declined to comment amid ongoing human rights abuses associated with the project.

In addition, Italy’s largest bank Intesa Sanpaolo, Germany’s second largest bank DZ Bank, as well as Natixis from France, have joined the growing list of banks that have ruled out direct finance for the EACOP project, bringing the total to 24. Spanish bank Santander is also understood not to be financing the project, which would be precluded as part of the bank's Environmental, Social and Climate Change Risk Management Policy. All four are recent or previous financiers of TotalEnergies, the project’s main backer. Natixis was the last French bank financier of Total to rule out financing.

The East African Crude Oil pipeline, or EACOP is a 1,443 kilometer pipeline planned for Uganda and Tanzania. It threatens to displace thousands of families and farmers from their land, severely degrade critical water resources and wetlands in both Uganda and Tanzania, and rip through numerous sensitive biodiversity hotspots. The oil transported via the pipeline would generate 34 million tons of carbon emissions each year.

EACOP has been condemned by the European parliament for its associated human rights abuses in Uganda and Tanzania. The pipeline and associated Tilenga oil field are expected to displace almost 118,000 people in Uganda and Tanzania, and since last week nine peaceful protestors were arrested following a student-led peaceful demonstration against EACOP in Kampala, Uganda.

Omar Elmawi, co-ordinator of the StopEACOP campaign based in Kenya said: “Lending or underwriting to projects that are mired in human rights violations, lacking in free prior and informed consent is wrong, shameful and unacceptable. The (re)insurers and banks that are still considering or are committed to underwriting EACOP cannot claim innocence, they are on the side of the human rights violators and this therefore makes them complicit.”

Isobel Tarr from UK-based Coal Action Network said: “Many of the insurance companies which have failed to rule out insurance for EACOP have syndicates at Lloyd’s of London, where the companies behind EACOP have reportedly been looking for insurance cover. These include Arch, AIG and Chubb to name a few. These insurers must rule out EACOP immediately, to stand against the human rights abuses that are taking place in the name of this climate-wrecking pipeline.”

Lindsay Keenan of the Insure our Future Campaign said: “Lloyd’s Council urgently needs to commit the marketplace to policies ruling out new fossil fuel projects to keep in step with other major industry players, and in alignment with the science on keeping global temperatures below 1.5C warming.”

Ryan Brightwell, Campaign Lead Banks and Human Rights at BankTrack said: “With so many of Total’s financiers out of the running to join the $2.5 billion project loan the EACOP needs to proceed, the pressure is growing on those few that remain. This includes South Africa’s Standard Bank, Japan’s SMBC and MUFG, Industrial and Commercial Bank of China and Bank of China, as well as UK’s Standard Chartered, which as chair of the Net Zero Banking Alliance should not be going anywhere near new oil projects of any kind, especially not one as mired in human rights and environmental damage as this.”

​This news follows last week’s announcement that the world's largest reinsurer, Munich Re, is ruling out all involvement in traditional oil and gas, including at its Lloyds syndicate. The five other insurers to rule out EACOP in August / September 2022 have been Axis Capital, Argo Group, Talanx, Argenta (subsidary of Talanx) and RSA. The insurers contacted were Aegis London, AIG, Arch, Brit, Canopius, Chaucer, Chubb, Cincinnati, Liberty Mutual, Lancashire Syndicates and Tokio Marine Kiln.