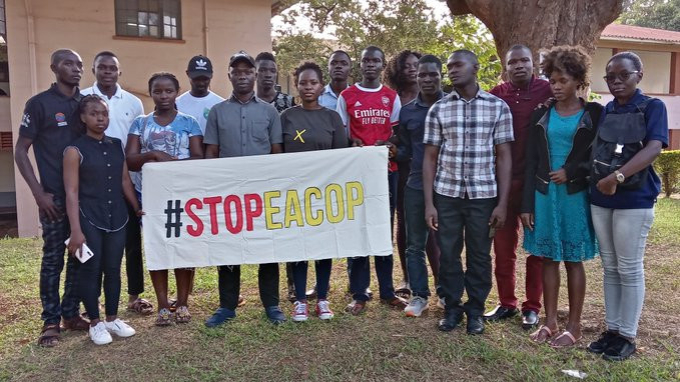 On Thursday the European Parliament adopted a groundbreaking resolution that officially recognises the disastrous consequences for both human rights and the climate due to the construction of TotalEnergies’ East African Crude Oil Pipeline (EACOP), and the associated Tilenga oil extraction project. This pipeline, under construction in Uganda and Tanzania, would be the largest heated oil pipeline in the world. More than one hundred thousand people, mainly farmers, are already being displaced from their lands without prior and fair compensation. If completed, the pipeline would generate up to 34 million tons of CO2 emissions every year and threaten protected wildlife.

The resolution calls for "an end to the extractive activities in protected and sensitive ecosystems, including the shores of Lake Albert," referring to the 132 wells that Total plans to dig into the Murchison Falls National Park, a protected area, and to the numerous protected ecosystems which the 50°C heated EACOP pipeline will cross. It also urges Total to take one year before launching the project to explore alternative projects based on renewable energies for better economic development.

This resolution puts further pressure on the financiers and corporations behind the EACOP that are already facing sustained resistance from local communities - and millions of people around the world.

While 20 banks around the world have made clear they will not finance the EACOP, European financiers including Standard Chartered, BBVA, Santander and Natixis have not yet distanced themselves from the project. The resolution comes against the background of recent protests by communities in parts of Uganda, citing failure by Total to mitigate against the impacts they have felt from the Tilenga oil project.

Omar Elmawi, Coordinator at Stop EACOP campaign says: “By denouncing the persecution and intimidation of human rights defenders who dare to criticize the project - several of whom have been arbitrarily arrested in the past - the resolution by the European Parliament is sending a clear message that the rights of the people in Uganda and Tanzania should come before the interests of corporations and governments out to enrich themselves. The resolution, however, urges Total to study the feasibility of an alternative route, but if we want to safeguard the environment and water resources, there’s only one route - ending this project that violates human rights and our environment. Communities and climate activists have already expressed their concerns and continued resistance to EACOP. The responsibility now lies with the financiers to take a stand against this project.”

Clémence Dubois, France Team Lead at 350.org, says: “This is an important step forward in the fight against EACOP. The pressure is growing daily against Total and this project at all levels of society and throughout the world. We won’t stop until the project is stopped. No banks or financers who currently fund Total can ignore their responsibility, and they should be prepared to meet increasing pressure too, until they stop financing climate bombs like this around the world.”

Juliette Renaud, Senior campaigner at Friends of the Earth France says: “This resolution of the EU parliament sends a strong political signal against the Tilenga and EACOP projects, whose human, environmental and climate costs are undeniable and simply unacceptable.Among other things, the resolution condemns the threats and persecutions of those who oppose the project in unequivocal terms: effective measures must now be taken immediately to protect them. Total cannot continue to develop its projects at all costs, hiding behind greenwashing statements about its commitment to freedom of expression or to biodiversity. The projects need to be promptly abandoned, and an effective remedy must be provided to affected communities.”

Sebastian Bock, Germany Team Lead at 350.org says: “Deutsche Bank is still supporting the French oil giant Total with millions. This resolution from the EU Parliament shows once again why the bank must completely withdraw from financing Total -  it must send a signal against this destructive project and show that the bank is finally serious about climate protection, especially after the greenwashing scandal surrounding its investment subsidiary DWS.”

The EU resolution can be found here. Please note the decision is not directly binding on Total, but it puts a lot of pressure on the company and on all the governments and financial institutions that still support this project.

For more information about the StopEACOP campaign, please visit the website.