Home › Blog
Time for Barclays to move Beyond Burning
How Barclays finances the burning of fossil fuels, biomass and nature
By: Natasha Ion – BankTrack
2022-11-14 Contact: 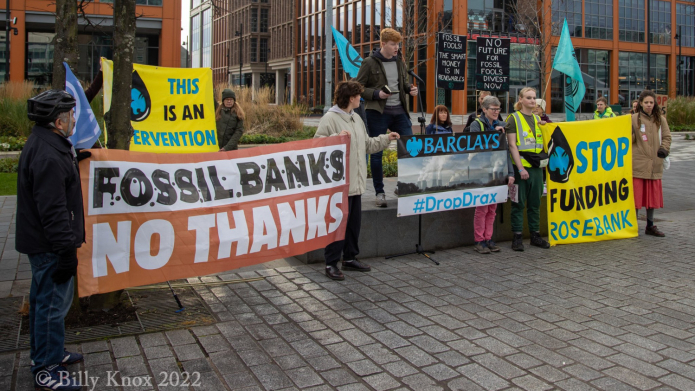 Today is the start of the Barclays Week of Action (14th - 20th November), carried out by a coalition of climate groups. During this week, BankTrack will be joining actions and running fossil fuel and biomass webinars to highlight how Barclays is one of Europe’s worst banks for climate.

Barclays ranks as Europe’s worst fossil fuel financier. Between 2016 and 2021, the bank pumped US$ 166.74 billion into environmentally destructive fossil fuels. Barclays also funds other industries guilty of burning through resources and violating human rights. The bank finances numerous companies producing biomass, often touted as a “renewable” energy source, but which exacerbates forest destruction and emits more CO2 than fossil fuels. Barclays is also a financier of the heavily polluting meat industry, which is regularly linked to illegal deforestation and Indigenous land violations.

Let’s take a look at some of the climate wrecking projects and companies that Barclays finances.

Equinor is a Norwegian state-owned oil & gas multinational. Despite claiming a “strong commitment to sustainability” and holding a “net zero” target, the company plans to increase its production of oil and gas by 2026. Equinor is the majority owner of Rosebank, a North Sea oil & gas field up for approval this month by the UK government. If approved, Rosebank would produce more emissions than the world’s low income countries combined. Equinor is involved in other North Sea expansion projects such as Wisting, which would endanger Arctic wildlife and the fragile ecosystem in the region. Between 2016 and 2021, Barclays gave Equinor US$ 2.46 billion in underwriting and lending. 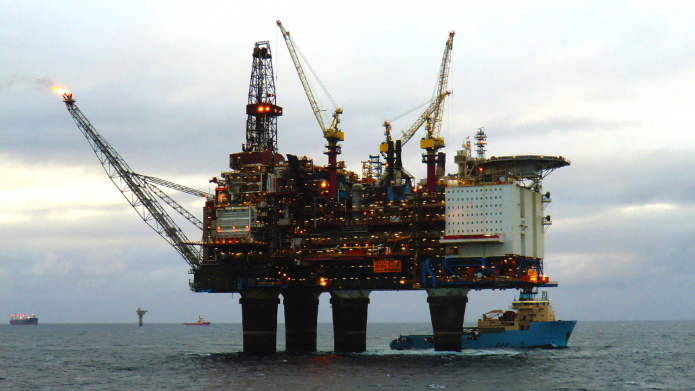 The largest coal mine in Latin America, Cerrejón has violated the rights of local communities for decades. As well as threatening water access and running through Indigenous territories, the operators of the mine have used underhand tactics to sow local division and created poor working conditions. This is not to mention the environmental impacts of the mine. If the entirety of Cerrejón’s known coal reserves are burned, the resulting 13 billion tonnes of CO2 emissions would be equivalent to 184 years of Colombia’s national emissions. The mine is now owned entirely by Anglo-Swiss company Glencore, which received US$ 538.17 billion from Barclays between 2016 and 2021.

Italian oil & gas supermajor ENI is one of the world’s biggest contributors to greenhouse gas emissions, and this year its CEO described decarbonisation as an “ideology”. ENI is facing the heat during COP27 due to its close connections with the authoritarian regime in Egypt. In April, ENI signed an Italy-Egypt deal for LNG, reinforcing the company’s self-declared “historical, long term, win-win relationship with Egypt.”, branded a "dangerous connection" by civil society groups. This relationship is damning considering the accusations of human rights abuses against the government in Cairo, and demonstrates the continued colonial relationship of resource extraction between Europe and North Africa. Barclays financed ENI to the tune of US$ 1.8 billion between 2016 and 2021. 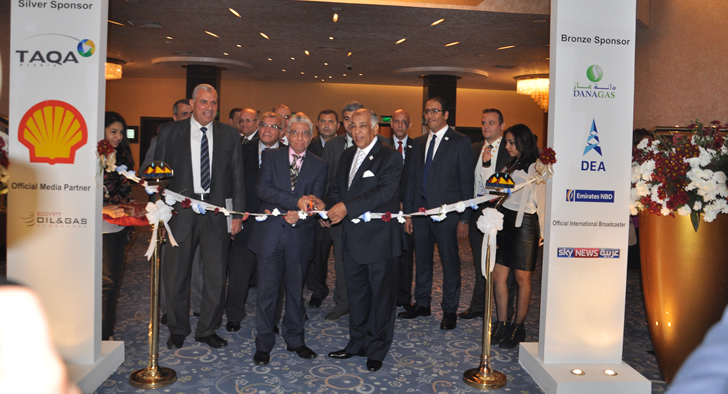 Biomass is classified by some governments as a “renewable” energy source, but in reality it is not low carbon, and threatens forests and biodiversity. Drax Group operates Drax power station, which remains England’s largest single source of carbon emissions despite its conversion from coal to biomass. It also has an international biomass supply chain business, which was recently the subject of a BBC Panorama investigation that found that ancient trees in Canada in Drax’s supply chain are being chopped down to fuel its power station. On top of the environmental damage of this deforestation, Drax is also accused of flawed Carbon Capture & Storage claims. Its pellet mills and export facilities are often sited in communities of colour and low-income communities, with breaches of pollution limits found at sites in these communities in the US south. Not only is Barclays listed as Drax’s banker in its Annual Report, but Barclays has given the bank millions in corporate loans and bonds.

Brazilian company JBS is the world’s largest meat processing company, making it a key player in one of the most polluting global industries. JBS’s supply chain is linked to encroachments on indigenous lands in the Amazon, while it sources cattle from at least two farms that use slave labour. Cattle ranching is also one of the main drivers of deforestation in the Amazon, which disproportionately affects Indigenous peoples in the region. In 2017, JBS was also fined by the Brazilian government for illegal deforestation. Barclays has propped up the illegal and unethical activities carried out by JBS through the provision of underwriting services. 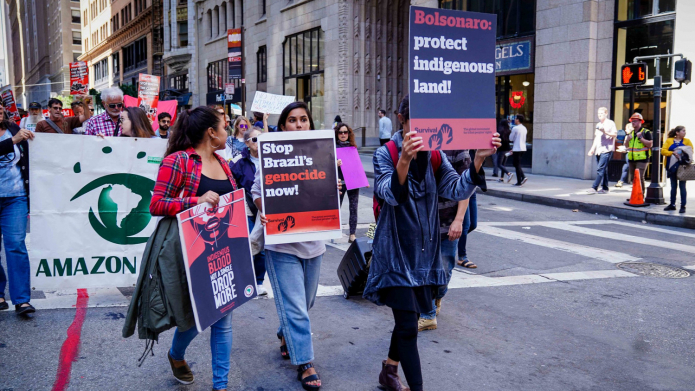 Global Day of Action for the Amazon.
Photo: Ayse Gürsöz/RAN

Barclays’ financing demonstrates that the bank has a long way to go in order to take meaningful climate action, and its policies tell the same story. In a recent report, BankTrack found that Barclays has no adequate policy covering lending for wood biomass. While the bank excludes financial services for upstream oil and gas in 2 unconventional sectors, it has no commitment regarding finance for companies expanding “conventional” oil and gas, or to phase out its own finance.

Barclays is one of the key banks accelerating climate breakdown by financing the burning of fossil fuels, biomass and nature. This week, along with a global coalition of civil society groups, we call on Barclays to end its financing for the world’s most environmentally destructive industries. Below are some links to find out more, or get involved with the Week of Action.

Fossil Banks No Thanks: Barclays profile