This extract from the newly published ‘Banking on Climate Change: Fossil Fuel Finance Report Card 2018‘ describes how 36 of the world’s top commercial banks have been found wanting again when it comes to their financing of coal power globally – and 2018 has to be the moment when we see profound, concerted action taken by these banks to curb their support for this climate-busting, health-destroying sector.

2017 saw disappointingly few signs of major international commercial banks aligning their coal power financing with the Paris Agreement. Nevertheless by year end, various developments brought a tangible change in the global coal power conversation – a change that many banks are going to have to respond to decisively in 2018.

One year after the Paris Agreement entered into force, the United Nations Environment Program unequivocally called for an end to the construction of new coal power plants and an accelerated phase-out of existing plants as key steps towards achieving the Paris goals. Also, the Powering Past Coal Alliance emerged, a U.K.- and Canada-led initiative that already comprises more than 50 countries, regions and businesses, and whose declaration explicitly calls for restrictions on financing for coal power.

At the One Planet Summit in December 2017, former U.S. Secretary of State John Kerry was even more explicit in insisting that “We have to say no coal investment, period.” Moreover, 16 European insurers have recently stepped up to the Paris challenge by pulling $22 billion in investments out of coal companies and/or committing to stop insuring new projects, with the Italian company Generali becoming the latest to divest from coal in late February 2018.

In stark contrast, a recent analysis revealed that the world’s top commercial banks – many of them Paris Agreement enthusiasts – doled out $275 billion in lending and underwriting services to the top 120 companies intent on developing new coal plants, primarily in developing countries. And the findings of this report card show that financing to the power companies with the most coal generation capacity has stagnated over the last few years, when it needs to be dropping drastically. 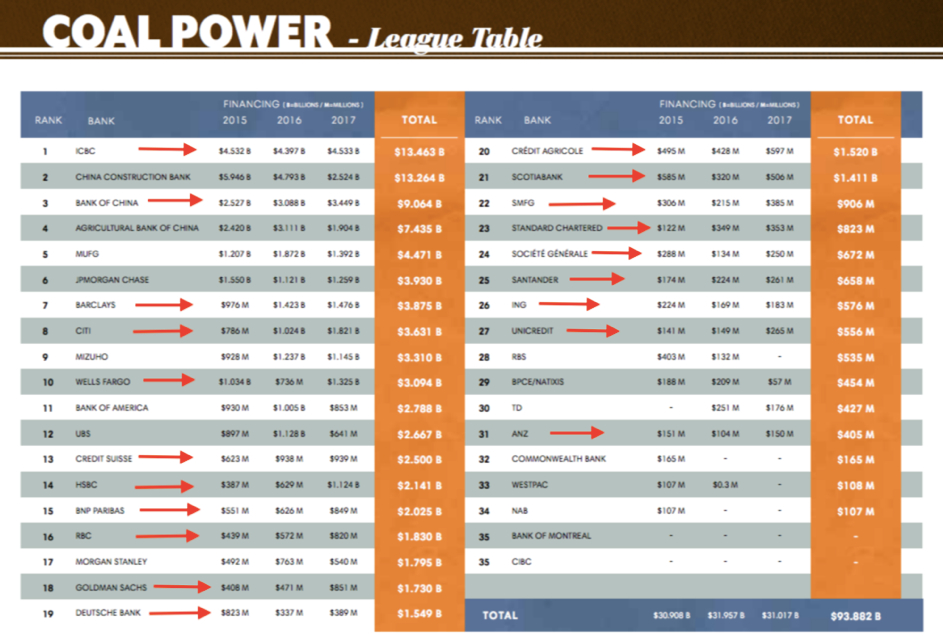 More than half of the banks surveyed in this year's Report Card increased their coal power financing in 2017.
Photo:

Consistent with their scant – or non-existent – coal power policy coverage, the seven Chinese and Japanese banks covered in this report provided over half of the financing for coal power over the last three years. At the same time, however, 18 western banks increased their financing for coal power in 2017, including Barclays, Citi, JPMorgan Chase, Société Générale and Standard Chartered.

As coal plant closures continue in the United States and reach a tipping point in Europe, on top of stunning regulatory and renewables advances in China and India, the imminent threat of billions of dollars of ‘stranded assets’ is materialising quickly. As a result, increasingly concerned investors and regulators are upping the pressure.

This leaves Japan (see the report card case study on Japanese conglomerate Marubeni), a handful of states (Poland, Turkey, the Balkan states, Egypt, and South Africa) and Southeast Asia as the principal sites of concerted planning for new coal plants. And with many coal power policies leaving loopholes for financing coal in developing countries, there remains substantial risk that banks continue to sacrifice local community health and the global climate by backing new coal plants.

However, with the identities of the companies planning new coal power in the developing world now out in the open via resources such as the Global Coal Exit List, and the Paris Agreement ‘stocktake’ process due to start at the next U.N. climate talks, there is a major opportunity for a sea change in the banking sector’s policy approach to coal power.

ING set the bar with its December 2017 announcement that its goal is to have “close to zero” exposure to utility clients involved in coal power generation by 2025. This welcome move, which merits a 'B' ranking for coal power in this year's report card, leapfrogs the Dutch bank beyond almost all of its European peers, most of which have thus far only ended project finance for coal plants worldwide. Also notching up a 'B' ranking for its coal power policy is ABN Amro, the only bank so far to have excluded coal plant developer utilities from financing.

Coal’s final frontier in Southeast Asia will be the acid test for banks, as the International Energy Agency (IEA) highlights the growing “attractiveness of project finance” from foreign banks as a means to build new coal power in the region. How much will banks buy into, hide behind and actually facilitate the dangerous myth peddled by industry that coal power is the answer to global energy poverty?

HSBC has again nailed its colours to the coal industry’s mast, passing up the opportunity to use policy revisions to withdraw from developing world coal plant financing. Communities in Vietnam, where HSBC is currently advising and coordinating the financing of two new coal plant projects – Long Phu I and Vinh Tan 3 – disagree with the bank’s approach. A recent report by the IEA shows that the path to 100 percent global energy access by 2030 will require mostly investments in off-grid solar and small hydro.