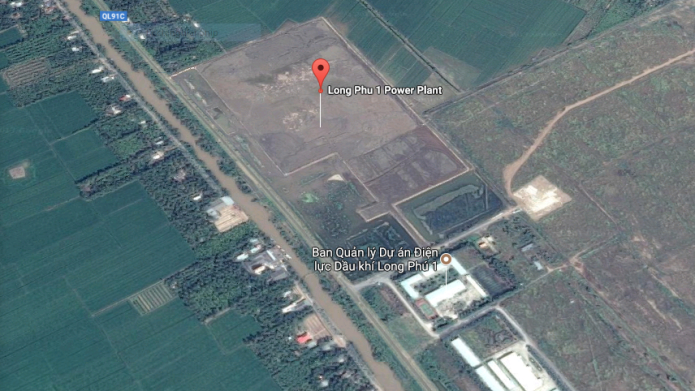 The first of the three proposed power stations at the Long Phu Power Centre is Long Phu I, a 1200MW coal-fired power station developed by Hanoi-based PetroVietnam Technical Services Corporation (PTSC), a subsidiary of energy provider PetroVietnam Group. Global engineering firm Black & Veatch won a contract to design and manage construction of the facility. It will import about 2.6-2.8 million tons coal a year from Indonesia or Australia. Another power plant, Long Phu II, 1320MW, is planned for the same site.

Long Phu I will be responsible for emitting over 7 million tonnes of CO2 each year, and there is evidence that it will be more polluting than suggested by the project's feasibility and due diligence studies required to secure funding. The plant is also expected to exacerbate local river and air pollution problems. Construction on the plant has started and is expected to be completed in 2018. The plant requires an investment of USD 1.59 billion. HSBC, Cathay United Bank, JP MorganChase and Mitsubishi UFJ are the lead arrangers behind a planned USD 650 million loan for the plant.

Construction Long Phu I delayed to 2023

The construction of Long Phu I will negatively impact local livelihoods as well as the environment. The power plant causes the conversion of agricultural land to industrial use, thereby impacting local farmers and causing the relocation of local people. The new coal power plant will also exacerbate pollution in the area leading to serious health risks. The plant will emit 6 million tonnes CO2 every year and will thus also worsen climate change. Enormous amounts of water are also needed for the operation of the power plant. This water will be used from the local Hau river, after it will be discharged in that same river again. Due to temperature differences, this will be fatal for many aquatic species.

The Paris Climate Agreement goals require a managed decline of fossil fuel production, and the construction of new coal fired power plants is not compatible with this. Banks must therefore immediately stop financing new coal-fired power plant developments anywhere in the world.

Furthermore, due to all the expected impacts of Long Phu I on the environment and local populations, the lead arrangers for financing this project, HSBC, Cathay United Bank, JP Morgan Chase, Mitsubishi UFJ Financial Group and the involved export credit agencies should not finance this project and withdraw from it alltogether.

The project area is mostly made up of rice fields, but also includes orchards and vegetable gardens. The conversion of this land from agricultural to industrial use will impact the livelihoods of local farmers and likely displace many people, as the local community includes more than 10,000 people.

Aquaculture is also important in the area and will be impacted by the increased pollution of river water and the discharging of the plant’s cooling water into the river.

The construction of the Long Phu complex poses serious risks for health and life of local peoples. According to a recent study by Harvard University, emissions from Vietnamese coal power plants were responsible for 4,300 premature deaths in 2011. This number is predicted to rise to 21,100 by 2030 if new coal power plants are built in Vietnam. For children especially, the risks that stem from the pollution of carbon dioxide, mercury and arsenic are high and can cause lung injuries, lead to nerve diseases and cardiovascular infections.

The Long Phu I project will be responsible for emitting over 7 million tonnes of CO2 each year.

There is evidence that Long Phu I will be more polluting than suggested by the project's feasibility and due diligence studies required to secure funding. A recent report by Friends of the Earth revealed that ERM Vietnam, retained by PetroVietnam and HSBC to conduct a due diligence review, has overestimated the efficiency of Long Phu I and underestimated its CO2 emissions, estimates 'unexplained and unsupported by any engineering analysis', and inconsistent with the estimated emissions of 800g CO2/kWh found by engineering firm Fichtner Viet Namthe (the project manager consulting firm for the project), General Electric (the turbine supplier), and the United States Export-Import Bank.

The Vietnamese government has demanded serious efforts to reduce global warming. In 2016 it announced that it would drop plans for further coal-fired power plants. The Vietnam Sustainable Energy Alliance (VSEA) has, in cooperation with the WWF, published a study according to which Vietnam can supply 100% of its electricity demand from renewable energy, proving that there is no need for the plant in the first instance.

The Long Phu complex is located on the shore of the Hau River. Tuoi Tre News reports that several factories, processing plants and industrial parks on the banks of the river have in places rendered the air ‘too polluted to breathe’, while the water is ‘blackened and full of trash’. The addition of the Long Phu I plant will further contribute to the pollution blighting the Hau river.

The site of Long Phu I is mostly rice field and gardens, with ‘patches of natural brushes, orchards, vegetable gardens, grass lands, ponds, and patches of habitats’ linked by corridors of natural vegetation. These corridors along canals and the river bank offer protection from erosion and provide habitat for wildlife.

Air pollution is a concern during both the construction and operation phases. Pollutants are mainly dust, exhaust fume with CO, SO2, and NOx. In addition, the use of material transport vehicles by the plant will create further air pollution, noise, and will worsen traffic.

Water issues are another environmental concern. It will take an enormous amount of water to construct and run the plant. During the construction phase of the plant, 720.5m3 (more than 700,000 litres) of water will be used per day while during the plant’s operation 4,000 m3 (4 million litres) of fresh water will be required daily.

The plant will use water from the Hau river for cooling and the heated water will be discharged back into the river. This discharged water will be around 10°C hotter than the optimal temperature for various aquatic species, and thus fatal for many of them. Furthermore, river dredging for the construction of a port route for Long Phu I will negatively impact aquatic life by increasing turbidity and destroying habitats.

Officials from PetroVietnam (PVN) face charges for violation of an anti-corruption law related to many projects and activities including the awarding of the Long Phu I EPC contract. Vietnamese state news site Nhan Dan reported investigations and dismissals of Phung Dinh Thuc, Nguyen Xuan Son, and Do Van Hau, who all had senior roles in PVN. Phung Dinh Thuc and Do Van Hau both participated in the signing of Long Phu I.  Financial support for Long Phu I triggers the OECD Convention on Combatting Bribery of Foreign Public Officials in International Business Transactions and the OECD Council Recommendation on Bribery and Officially Supported Export Credits.

The two Russian banks involved in financing Long Phu I - Gazprombank and Vnesheconombank - are on the US and EU sanctions list relating to Russia's violent annexation of Crimea.

Construction Long Phu I delayed to 2023

Power Machines, the major contractor of Long Phu I, suspended its construction work since March 15, 2019 due to a US sanction on the Russian company. This sanction, preventing Power Machines from doing business with local and international banks, has seriously delayed the construction process. In June 2019, a report was published by the Ministry of Industry and Trade which stated that the completion date of Long Phu I is delayed to 2023.

The Long Phu I coal power plant has faced much delay because of a US sanction on Russian major contractor Power Machines, Vietnamnet reported on June 11, quoting a Vietnamese government report. The project is expected to face a delay of 36 months compared with original plans after the US Treasury put Power Machines in an embargo list on January 26 this year. General Electric unilaterally suspended a contract to supply turbines and generators while other sub-contractors were unable to transact in USD. Many international banks also said they have frozen the pledged USD 780 million loans for Long Phu I.

PetroVietnam has withdrawn request for Ex-Im Bank US funding

The Export-Import Bank of the United States, a lender run by the American government, has said that the Vietnamese state-controlled company, PetroVietnam, has withdrawn its application for financial support for the Long Phu I coal power plant (NY Times).

The total project costs amount to USD 1.9 billion. The sponsors will finance the project on a 70:30 debt to equity ratio, seeking USD 1.4 billion in debt. HSBC, Cathay United Bank, JP MorganChase and Mitsubishi UFJ plan to lend USD 650 million for the project.

In February 2018, it was reported that Petrovietnam withdrew its application for funding from the US Ex-Im Bank.

General Contractor for Engineering, Equipment Procurement, Construction, Installation and Commissioning as part of the consortium with Power Machines and BTG.

General Contractor for Engineering, Equipment Procurement, Construction, Installation and Commissioning as part of the consortium with PTSC and Power Machines.

General Contractor for Engineering, Equipment Procurement, Construction, Installation and Commissioning as part of the consortium with PTSC and BTG.

Powering past coal? Top UK banks are passing the buck

The U.S. May Back a Vietnam Coal Plant. Russia Is Already Helping

BDCC on track to implement ahead of schedule

Fesco handles the heat in Vietnam

Long Phu 1 Thermal Power Project is being developed as planned

Debunking the Doctored Numbers on Long Phu I Greenhouse Gas Emissions
2017-06-30 00:00:00 | Friends of the Earth
correspondence

In December 2013, after three years of delays, a consortium of three companies, Russia's OJSC Power Machines, Slovakia's BTG Holding, and Vietnam's PetroVietnam Technical Services Corporation (a subsidiary of the PetroVietnam Group) signed an engineering & construction agreement with PetroVietnam for the construction of Long Phu I. At the time, the cost was projected at USD 1.39 billion. The first unit was set to be completed in December 2017, and the second in May 2018.

In January 2015, PetroVietnam and the construction consortium signed another agreement, with completion now scheduled for 2019.