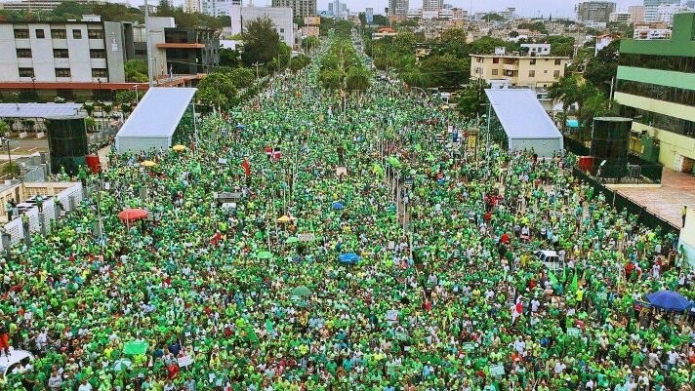 It was two years ago this month that the $632.5 million loan contract for the Punta Catalina coal plant project in the Dominican Republic was agreed by a consortium of five European banks: Deutsche Bank, ING, Santander, Société Générale and UniCredit. For ING and Société Générale, the inking of the deal came just a few months before both banks adopted new investment policies ruling out project finance for coal plants in ‘developing’ countries such as the Dominican Republic. How all the banks, especially the Dutch and French giants, must be ruing that decision now.

For one thing, although the project has an estimated price tag of $2 billion, there is widespread speculation that total project costs are spiralling out of control, way beyond this conservative figure. But more significantly, as we discussed back in January this year, the already controversial project has become one of the main focal points in the sprawling, multi-country corruption affair involving the Brazilian construction company Odebrecht.

In 2013, Odebrecht won the tender to construct the two coal-fired units at Punta Catalina in highly dubious circumstances. Following a trial in a US court at the end of 2016, it emerged that Odebrecht paid $92 million in bribes to Dominican officials between 2001 and 2014, as a means of securing a number of contracts – that’s a timeline of concerted corruption which coincides with the awarding of the Punta Catalina contract.

However, amidst public uproar in the Dominican Republic, the last six months have seen a flagrant circling of the wagons by state authorities in a bid to muddy the verifiability of whether corrupt practices were involved in Odebrecht being permitted to construct the coal plants. A stand out piece of manoeuvring over the last six months has been the stuffing of an investigatory body (a ‘Commission of notables’ – see more on this below) with appointees with close historical ties to Odebrecht itself and to the Punta Catalina project promoter CDEEE, the state-owned electric utility.

One element in understanding why this obfuscation has been advanced so brazenly by state authorities is very simple: the project’s financing, and trying to ensure that the banks don’t walk away.

Enrique de León, from the Dominican group National Committee to Combat Climate Change (CNLCC), participated at the annual meetings of Deutsche Bank and Société Générale in May along with BankTrack, urgewald, Les Amis de la Terre and Re:Common. Putting the senior executives of these banks on the spot about the pungent corruption allegations hanging over their investment in Punta Catalina, Enrique elicited public commitments from both banks to a ‘zero tolerance’ approach, should conclusive proof emerge about the use of corrupt practices by Odebrecht to advance construction of the Punta Catalina project.

We also received notice that the banking consortium had been compelled – perhaps in April – to turn to legal counsel in order to appraise the corruption allegations and the legal proceedings which have been erupting in the Dominican Republic. The banks involved have also suspended disbursement of project finance while the investigation by legal counsel is ongoing.

On returning to the Dominican Republic from Europe, Enrique found that national media interest in his European banking tour had been piqued – the credibility of the project was crumbling further once word got out that some of Europe’s top banking names were taking fright at the fallout of the Odebrecht scandal.

Precisely where the banks’ assessment of this sorry saga now stands remains unclear, though in the weeks following the bank AGMs a number of key developments have taken place in the Dominican Republic:


Meanwhile, also in June, a ‘commission of notables’, set up by the government to determine if illegalities took place in the securing of the Punta Catalina contract, issued a report which concluded – as expected – that the Punta Catalina tender had been carried out in accordance with the law. The report, however, did acknowledge that numerous irregularities took place in the tender process but denied the charge that Odebrecht’s vastly inflated (and ultimately successful) bid represented ‘over-valuation’.

This report from the commission of notables, which failed to identify anyone associated with wrongdoing, was widely dismissed as a whitewash, leaving its members in disrepute. Bear in mind, too, that one of the members of this commission, César Sánchez, is one of the 14 people arrested in June. Sánchez is accused of receiving bribes for a previous infrastructure project built by Odebrecht in the Dominican Republic.

To summarise, the Dominican government has now accepted that indeed there was bribery involved in the approval of the loan for the project, but continues to deny that malfeasance took place during the tendering process for the construction contract. Nevertheless, this is a highly significant development and admission – financing for Punta Catalina by BNDES and the consortium of European banks was ensured and ultimately approved in the Dominican National Congress via the payment of bribes by Odebrecht.

If ‘zero tolerance’ towards corruption is a ‘sine qua non’ for the European banking consortium, as we were assured in May, then a termination of the financing agreement by the individual banks involved in the Punta Catalina financing must surely be in the post – though, for now, as regards the position of the banks, we are no further forward. Yet the latest desperate move by the Dominican state appears to be anticipating an inevitable drying up of finance from European sources. In mid-June the Dominican government turned to the bond markets in order to raise $500 million to further finance Punta Catalina construction. This move has been described by CNLCC as a further ‘abuse of power’ by the Dominican government in its beleaguered efforts to advance the project.

On the streets of Santa Domingo, capital of the Dominican Republic, anger at the Odebrecht scandal is showing no signs of abating. July 16 saw the largest mobilisation of protestors this year, as reported in the New York Times. Dominicans based in Miami, New York and Madrid also showed their solidarity with the ‘Marcha Verde’ (‘Green March’) movement, which is demanding the criminal prosecution of Danilo Medina, the country’s president, for obstructing justice, for his involvement in the criminal acts committed at Punta Catalina and for having received funding from Odebrecht for electoral campaigns.

How long is it now going to take self-professed ‘green banks’ to wake up to their mistaken investment – and cut their ties with this corrupt coal project?