Home › Blog
Operation Car Wash and a coal plant in the Dominican Republic – anti-corruption protestors are not giving up
By: Luca Manes – Re:Common
2017-10-10 Share this page: 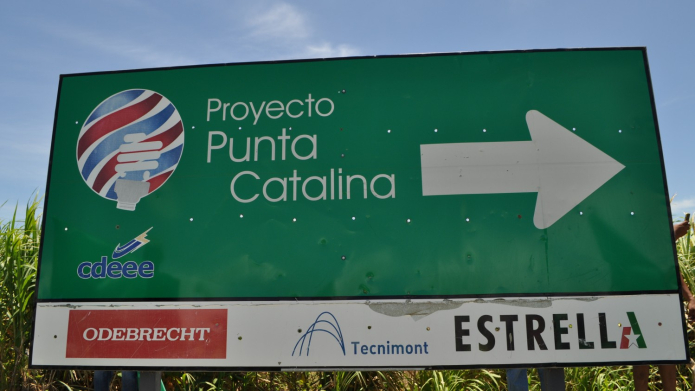 This article first appeared in the Italian weekly L'Espresso following a fact-finding mission to the Dominican Republic by two staff members of Re:Common, a long-standing BankTrack partner organisation based in Rome.

In the Dominican Republic a substantial part of the local population has decided to declare war on corruption.

Since January this year, at least two demonstrations a month have been held in every corner of the Caribbean country, promoted by a coalition of civil society organisations called 'Marcha Verde' ('Green March'). Tens of thousands people, all with green t-shirts, caps and flags, have been taking to the streets to express their indignation against the government and its big business partner, Odebrecht.

The powerful Brazilian construction company has been involved in corruption cases in 12 countries in Latin America and Africa, and it moved its 'kickbacks distribution center' to the Dominican Republic when Brazilian magistrates discovered that there was something drastically wrong with Odebrecht's corporate accounts. This was at the beginning of Operation 'Lava Jato' ('Car Wash'), one of the biggest investigations into corruption in history. Lava Jato rocked Brazilian politics, including former presidents Lula Da Silva and Dilma Rousseff. Along with Odebrecht, the oil giant Petrobras and the Italian-Argentine conglomerate Techint are also heavily implicated in the scandal.

Following a trial in the United States, Odebrecht paid a $3.5 billion fine after admitting to distributing $788 million in bribes around the world. Other than Venezuela, the Dominican Republic is the country in which the disgraced company paid the most kickbacks: $92 million between 2001 and 2014. And in the Dominican Republic, Odebrecht had contracts worth $5 billion, with almost half of that sum earmarked for the Punta Catalina coal plant construction contract.

Astonishingly, however, the Punta Catalina project has not been included in a further agreement agreed with Dominican judges and is not playing a central role in a current investigation, which we will refer to later.

For Marcha Verde, which has made Punta Catalina the symbol of its struggle, the coal plant is the cornerstone of a system that has ramifications for all local institutions. "We want the end of corruption and impunity, but without clarity about what has happened for the Punta Catalina contract, there will never be true justice," comments Enrique de Leon, member of the National Committee against Climate Change, one of the many organisations actively involved in the Green March.

For the purposes of implementing Punta Catalina, in 2014 Odebrecht formed a consortium with the local company Estrella and the Italian company Marie Tecnimont. Unicredit, one of the five European banks (the others being Deutsche Bank, ING, Société Générale and Santander) who agreed to $600 million in loans for the project, is also Italian, just like Sace, the export credit agency insuring the financial operation.

However, the European lenders have thus far only paid the first tranche of the money – about half of the due amount – and have opted to freeze the second tranche while awaiting the result of an independent audit to find out if the deal was corrupted and whether it is better to withdraw from the whole operation. Both Sace and Unicredit did not want to comment on the issue when we contacted them.

Technically speaking, if the banks were to step out of Punta Catalina financing, the remaining sum would be paid by Sace, who would then turn to the Dominican government – notably, it has already had to deal with Punta Catalina financing problems related to BNDES, the Brazilian development bank, which is deeply involved in the Lava Jato scandal. Although it was initially intended that the 'turnkey' coal plant project would see 80 percent of the financing coming from the developers' consortium, the government of the Caribbean country has in fact already had to allocate $1.2 billion for Punta Catalina. And the deployment of further public money cannot be ruled out.

"The cost calculation was done inadequately,” explains Antonio Almonte, energy expert and exponent of the Partido Revolucionario Moderno, “and there is a serious risk that project costs could reach $3 billion. This is an extremely hefty bill for our citizens, who are already paying 30 percent higher bills to fund Punta Catalina.” Almonte believes that coal represents the right choice for the Dominican energy mix, but is now convinced that Punta Catalina is an inadequate project.

Almonte's concerns were confirmed the day after we met with him in August this year when an article in the local newspaper El Listin Diario reported that Odebrecht was demanding a further $700 million from the government to cover Punta Catalina cost overruns.

This development was in open contradiction to the contents of an independent report drawn up by a group of 'notables', set up by the Dominican government in January 2017. After eight months of activity, the panel presented its final report, but it seems more like a fig leaf than a real attempt to seek the truth.

Persio Maldonado, director of the daily newspaper El Nuovo Diario and chairman of the Asociación Dominicana de Diarios, was among the notables who signed the final report. We interviewed him before the release of the article in El Listin Diario.

According to Maldonado, "I cannot say whether or not there has been corruption, but I can repeat what was written in the conclusions of our work, that is, that the existing law for the licensing process has been respected and that there was no cost overrun.”

The journalist also expressed confidence about the state of the work at the plant – "the project is 70% completed and it will be finished by the end of 2018." On this last point, Rafael Abreu, chairman of the CNUS trade union association, had given us quite different indications. Referring to the fact that the yard employs 3.300 workers, largely local, Abreu did not hold back with his criticisms. "Our members tell us that the plant will be completed only in 2019 and they often complain about the low quality of the materials used for the construction. There have been several accidents, two people have lost their lives and many others have been injured."

Delays, significant cost increases and corruption. Yet the government seems almost 'compelled' to defend Odebrecht, which in other contexts would have been kicked out long ago.

It is very likely that such a questionable relationship is explained by the dubious relations between President Danilo Medina and Odebrecht.

An article published by Bloomberg in June 2017 describes how Monica Moura attempted to bribe Hipolito Polanco, Medina's presidential candidate in 2016. Moura is the wife of Joao Santana, Medina's special adviser, and a kind of guru in Dominican politics. The couple are now serving time in Brazilian prison due to their involvement in the Lava Jato scandal.

Given this background and concerns over the lack of independence of the judiciary, Marcha Verde activists are pessimistic about the outcome of the investigation, which is expected to be concluded by the end of 2017.

Turning to the environmental side of the story, Punta Catalina rises on a stretch of coastline in an area rich in vegetation. In the vicinity of the construction site there are sugar cane, coffee and mango crops – the special certification of the highly valuable mango crops is likely to be rescinded because of the coal plant emissions, if Punta Catalina ever starts firing.

Ironically, the government does not own the plot of land where the plant construction is taking place. Currently, there is an 'Emphyteusis' contract with the Vicini Group, a powerful family of Italian origin which is very active in every sector of the Dominican economy. The government will have to negotiate a purchase price with the Vicini Group sooner or later, because the bonds it issued on international markets earlier this summer to cover the gap in Punta Catalina financing will be less shaky if at least the land on which the plant is located is publicly owned.

There is one final ignominy, as related by various people we interviewed during our visit to the Dominican Republic: the coal to be burned in the Punta Catalina plant will come from Colombia. This could end up being the same coal stained by the blood of trade unionists and ordinary citizens killed by paramilitary units to 'facilitate' the extraction business in the Colombian region of Cesar. Only a few months ago, and as reported by Espresso, Enel stopped buying Colombian coal for its power plants in Italy.

Marcha Verde protestors are becoming aware of the story behind Colombian coal. They plan to keep on protesting until the institutions in the Dominican Republic acknowledge that there’s an issue with corruption and start to do something about it.