Home › Blog
A beginner’s guide to AGM season
For the uninitiated campaigner, we explain why a bank’s yearly major shareholder gathering is a key opportunity for activism
By: Neil Simpson – BankTrack
2022-04-26
Nijmegen
Contact: 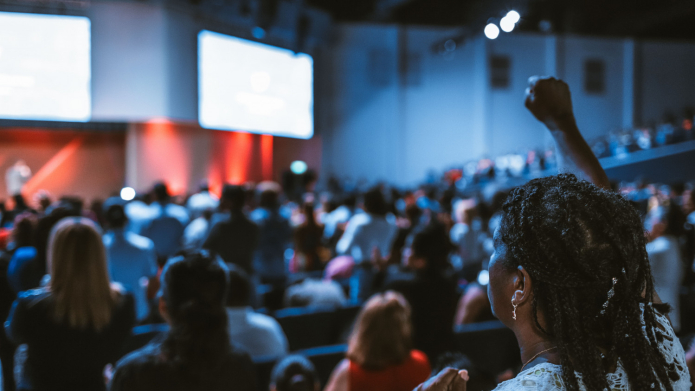 Shareholders have the chance to speak up at AGMs. Photo: Pexels/Luis Quintero

If you’re in the business of commercial bank finance campaigning, AGM season is an important time. Annual General Meetings (AGMs) provide a golden opportunity to make direct, public contact with a bank’s board of directors and challenge policy decisions. That’s why BankTrack attends as many as possible – Nordea Bank’s AGM in March, for example.

Not sure what an AGM is? Don’t understand why bank directors would make themselves publicly available to activists? Allow us to explain.

An AGM occurs soon after any company publishes its end-of-financial-year results. This is dependent on location, so European and North American banks tend to hold AGMs between March and May, Asia’s season gets going in June, followed by Australian banks between November and December. It’s the ideal time for company shareholders to get together and digest what has happened during the preceding 12 months, then look ahead to the next 12.

During an AGM, shareholders with voting rights have their say on all sorts of matters concerning the company. For example, questions asked at Lloyd’s Banking Group 2020 AGM included:

Why on Earth would a bank willingly submit itself to questioning and shareholder voting? Because most commercial banks are publicly traded companies (commonly referred to as public companies). This means the bank’s ownership is organised through shares that are traded on a stock exchange, with shareholders receiving a share of profits and a slice of influence. Banks must therefore practise transparency. For example, they must present annual financial statements for shareholder approval and allow (eligible) shareholders to elect its board of directors for the upcoming year.

In practice, the biggest bank shareholders are typically pension funds and investment companies, but the general public can also buy and hold shares. With this in mind, BankTrack owns individual shares in commercial banks. This means when a bank’s AGM approaches, we are invited to submit questions to the board of directors and to attend the AGM itself. This is one of the only occasions in a typical year when a campaign group can directly ask a powerful banker to explain their activities.

This 2018 clip of a Market Forces campaigner grilling Dr Ken Henry, the chair of National Australia Bank (NAB), succinctly conveys the opportunity that a bank’s AGM presents to its shareholders:

The initial question asked of Henry was:

“Given the burning of oil and gas releases greenhouse gases that contribute to global warming, and that global warming has myriad and obvious negative impacts on the Arctic and Antarctic, can NAB confirm it plans to immediately withdraw all credit exposure to its oil and gas clients and refuse to finance any oil and gas infrastructure, globally moving forward and if not, why not?”

The shareholder feedback mechanisms that AGMs facilitate are excellent for generating these uncomfortable exchanges. Standing face-to-face with a bank’s board of directors to ask such questions is powerful, because a bank’s reputation counts for a lot: Henry’s unsatisfactory answer deftly highlighted NAB’s policy shortcomings and this accelerates change.

The coalition’s proposal was a ‘special resolution’, which meant that it would become binding if 75% of shareholders approved it at HSBC’s 2021 AGM. In response, HSBC’s management proposed its own resolution to phase out coal financing. The vast majority of shareholders voted in favour; this was a direct result of shareholder pressure. HSBC must now phase out all coal-fired power and thermal coal mining financing by 2040, and share detailed, medium- and long-term plans for phasing out its fossil fuel financing.

In May 2021, the oil and gas mammoth ExxonMobil was also rattled by shareholder activism. A small hedge fund called Engine No.1 nominated four new members to Exxon’s board of directors; three were successfully installed. This was a major upset: Exxon is now answerable to at least three board members intent on moving in a climate-friendly direction. Around the same time, the Dutch campaign group Follow This achieved a similar upset at Chevron after lobbying enough shareholders to vote through pro-climate resolutions.

Banks have different end-of-financial year schedules, depending on where they are based. Just like awards season, AGM season is lengthy, partly in order to avoid clashes. 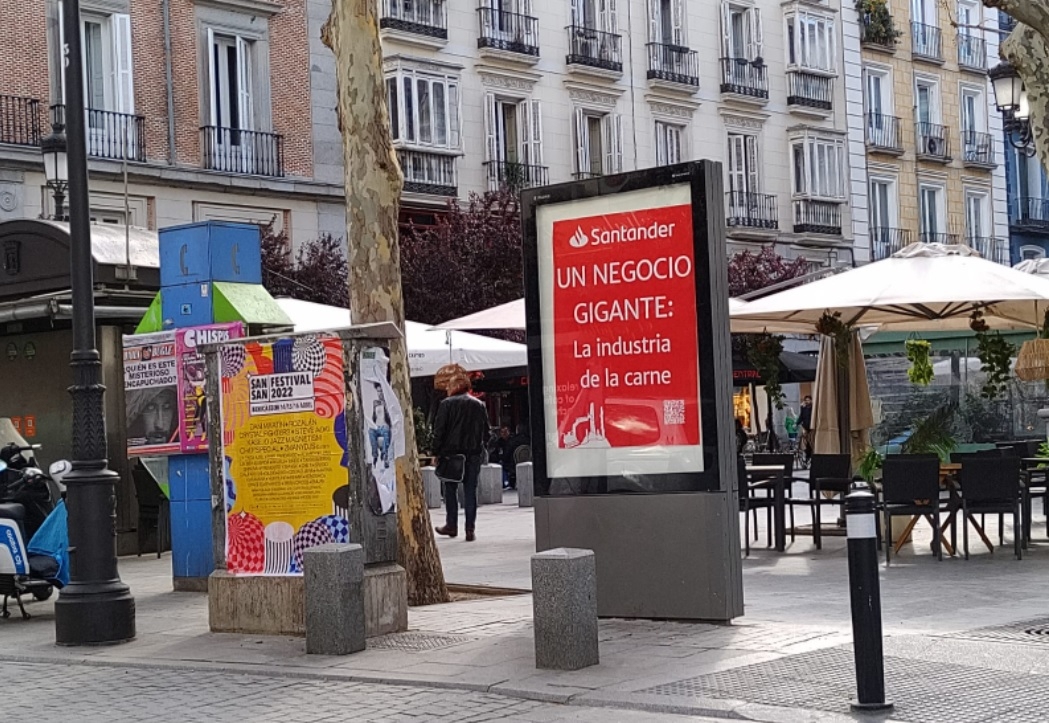 BankTrack’s first AGM of the year was at Banco Santander in Madrid on 1st April. The Spanish bank is one of the major financiers of JBS, the world’s biggest meat company. JBS is a major driver of deforestation in the Amazon – it was even fined by the Brazilian government in 2017 for buying meat grazed in illegally deforested areas. We asked Santander how its net-zero-by-2050 and anti-deforestation commitments are compatible with its poor track record in these areas. Meanwhile, subvertising activists installed posters about Santander around Madrid to raise awareness among customers and employees of the bank.

Royal Bank of Canada’s 2022 AGM was on 7th April. The bank waited until the day itself to cancel all in-person elements, wasting long journeys for many attendees. The fifth-largest fossil fuel financier in the world, RBC still felt the pressure through a number of rallies marking its AGM. Wet’suwet’en Hereditary Chiefs and climate finance experts posed questions to RBC’s board to highlight the bank’s role in destroying the lives of Canada’s Indigenous Peoples, via projects like the Coastal GasLink pipeline. RBC rejected a key climate resolution concerning oil and gas because it was 49 words longer than the permitted limit. Shareholders still voted in significant numbers for resolutions calling for stricter fossil fuel financing parameters, less freedom to assist in privatising extremely polluting industries, and an actual RBC climate plan.

On 25th April in Amsterdam, Extinction Rebellion activists made national news by disrupting the AGM of the largest Dutch bank, ING. This also helped to highlight the campaign of a broader group of civil society organisations, including 350 Netherlands, Friends of the Earth Netherlands, and BankTrack, who are calling on ING to stop financing companies that are intent on expanding the fossil fuels industry.

North America’s biggest banks face an influx of climate-related shareholder resolutions this AGM season, spearheaded by Sierra Club and targeting JPMorgan Chase, Bank of America, Wells Fargo, Citigroup, Morgan Stanley, Goldman Sachs, Bank of Montreal and TD Bank. In accordance with the International Energy Association’s 2021 verdict that “there is no need for investment in new fossil fuel supply in our net zero pathway”, the ICCR’s resolutions call for each bank to establish policies by the end of 2022 that will eliminate financing for fossil fuel expansion.

In Switzerland, campaign group ShareAction has assembled a group of 11 Credit Suisse investors ahead of the bank’s 29th April AGM. The group, which includes some of Switzerland’s biggest pension funds, has co-filed a shareholder resolution proposing that the bank begins reporting on its own strategy to align “financing with the Paris Agreement objective of limiting global warming to 1.5°C”. It calls for detailed, step-by-step plans of how this strategy will play out in its project financing, corporate lending, capital markets underwriting and facilitation, and investments. 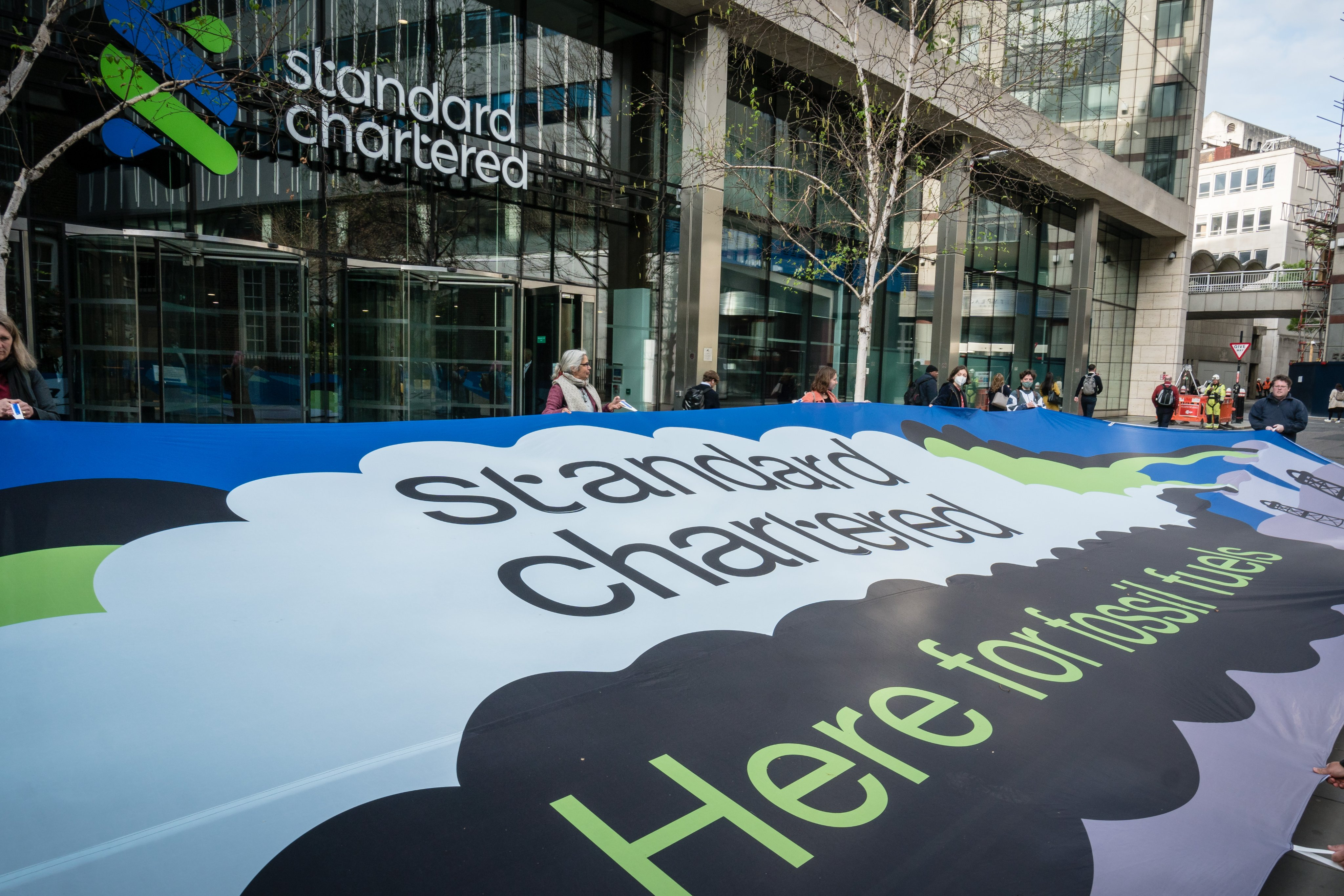 Coming up on 4th May is Standard Chartered’s AGM in London. Employing a similar tactic to the 2021 HSBC action detailed above, campaign group Market Forces has submitted a shareholder resolution. It calls for Standard Chartered’s board of directors to “set, disclose and implement a strategy to manage its fossil fuel exposure”, to “no longer provide financing where proceeds would be used for new or expanded fossil fuel projects”, and to set “short-, medium-, and long-term targets to reduce fossil fuel exposure”. They got the ball rolling with a Day of Action on 19th April in London, which BankTrack also joined (pictured above).

Also on 4th May, Barclays will hold its AGM in Manchester. As Europe’s worst fossil fuel financer, Barclays elicits significant activism all year round and arriving shareholders will be greeted by a healthy helping of protestors. We’ll be asking the board about its continued financing of the world’s largest meat company, JBS, while shareholders will be encouraged to vote against Barclays’ underwhelming new climate strategy. Barclays has so far failed to update its oil and gas policies as part of this strategy, which means the bank can continue financing new oil and gas extraction, including from tar sands.

South Africa’s Standard Bank will hold its AGM on 31st May, when shareholders will vote on a non-binding advisory resolution. Proposed by Aeon Investment Management and the shareholder activism group Just Share, the resolution calls for details of the bank’s oil and gas exposure and short, medium and long-term targets for reducing financed greenhouse gas emissions. Currently, Standard Bank climate policies do not exclude support for the expansion of the fossil fuels industry, and the bank is playing a crucial role in arranging the controversial $3 billion project finance loan for the East African Crude Oil Pipeline.

For a complete rundown of every bank AGM coming up in 2022, refer to the regularly updated Fossil Banks No Thanks AGM calendar.

There are a number of ways to affect change at banks during AGM season, each with their benefits and limitations.

There are also big differences between countries in rules guiding how AGMs are run, so make sure to check the rules that apply to the bank you would be targeting. For example, there are major differences in how easy it is for shareholders to propose resolutions. In the US and UK this needs just 100 shares, while in the Netherlands it needs the support of shareholders with at least 3% of outstanding shares.

It’s also important to keep in mind how geography dictates which levers an activist can pull during AGM season. For example, Swiss corporate law is currently being relaxed in ways that will encourage shareholder activism. According to The Law Review’s 2021 title, ‘The Shareholder Rights and Activism Review’, India’s publicly listed companies have traditionally remained under the control of their founders, deadening activists’ power, while in the US, “several governmental entities have also demonstrated an appetite for enforcing their existing regulations against activists”. The risks associated with protesting and civil disobedience vary depending on territory, too, and may be dangerous or simply impossible under more repressive governments.

A seat at the table

As publicly traded companies, commercial banks are required to accommodate shareholder interactivity. Buying shares in a bank is therefore a savvy way to gain a seat at the table and exert influence — especially if like-minded shareholders join forces. Directly asking questions of banks’ boards of directors and tabling resolutions for a shareholder vote are key tactics in nudging financing policies in the right direction. That’s why the AGM season is a valuable focal point for commercial bank campaigners and activists alike.