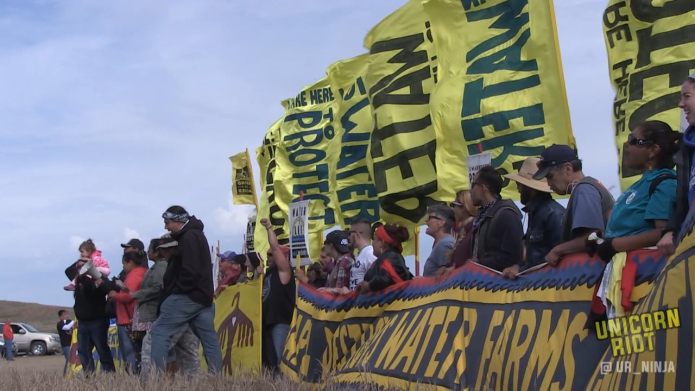 The letter, which has been widely circulated but not previously published, is the first public sign of discord among the 90 Equator Principles banks, and follows intense international criticism of the seventeen banks that provided financing for the construction of DAPL. The pipeline project became a flashpoint in relations between Native Americans and the US state, although it was financed under Equator Principles standards which are intended to ensure environmental and social risks are well managed.

The ten banks, all from the Netherlands, France, Spain and Italy, propose changes to the Equator Principles to remove the assumption that projects in high-income countries such as the United States need less scrutiny because environmental and human rights are already adequately protected by local law, and to ensure banks have more powers to address breaches in the standards when they arise. The banks also call on the other 80 bank signatories to the Equator Principles to support these aims.

The letter does not name the Dakota Access Pipeline, but notes that some of the bank signatories to the letter “were publicly and harshly criticised for supporting a project where consultation with an Indigenous community did not involve their free, prior and informed consent (FPIC). They were also criticised for not being able to intervene with the Sponsors in order to help identify a solution that was agreeable to all parties in this context.”

The ten banks go on to express concern that the case “is likely to damage the reputation of the Equator Principles (EPs) as a “golden standard” and a common playing field for determining, assessing and managing environmental and social risks in projects”. Noting that they remain committed to the EPs but that “that the world has changed”, the banks recommend that “significant improvement to the EPs is now needed to avoid similar situations in the future”.

The Equator Principles Association already announced on 18th May that a “working group” would re-examine the distinction between high-income countries and others, pre-empting the letter from banks, dated 22nd May.

The letter was signed by ABN Amro, BNP Paribas, BBVA, Credit Agricole, FMO, Intesa Sanpaolo, Natixis, NIBC, Rabobank and Société Générale. Of these, five (BBVA, Credit Agricole, Intesa Sanpaolo, Natixis and Société Générale) participated in the Dakota Access Pipeline project loan. The lead banks behind the loan - Citi, Mizuho, Bank of Tokyo Mitsubishi UFJ and TD Bank – have not signed the letter, although Citi has noted in its reporting that “the current approach to consulting Indigenous peoples in the U.S. does not align with international standards”.

Civil society groups sent an open letter to the Chair of the Equator Principles Association in November last year urging the Association to take long overdue, concrete steps to strengthen their climate commitments, and to express deep concern about the role of Equator banks in financing DAPL.

Johan Frijns, BankTrack director, comments: “The changes demanded by these banks would be a significant step in the right direction, but deeper changes than this are needed to ensure the Equator Principles are fit for purpose in the post-Paris Agreement world. In particular, the minimal commitments on climate change are wholly inadequate to make the Principles Paris-proof and must be strengthened. These issues can only be adequately resolved with a new update to the Equator Principles, and we hope the Equator Principles Association will set this overhaul in motion, at least by the time of its annual meeting in October.”