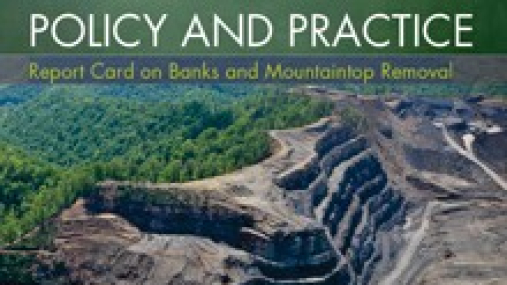 A copy of the report card can be found here.

Since January 2008, the report card found that these nine banks have provided more than $3.9 billion in loans and bonds to companies practicing mountaintop removal coal mining, including Massey Energy and Arch Coal.

"The idea of corporate responsibility has come up repeatedly in recent weeks following the coal mine and oil disasters. That responsibility extends beyond profits to the health and wellbeing of our communities. By continuing to finance mountaintop removal coal mining these banks are throwing that responsibility aside," said Mark Kresowik of the Sierra Club.

PNC, which finances almost half of all mountaintop removal coal mining, ranked worst of the worst. The bank earned an "F" for its total failure to take environmental risks into account in its lending practices. Also earning an "F" were UBS and JPMorgan Chase, which respectively finance about one-third of all the MTR coal mined in Appalachia, and GE Capital, which backs about one-quarter of all operations.

"PNC, JPMorgan Chase and UBS received failing grades today as the lead financiers of mountaintop removal, the devastating practice of blowing up our mountains for an insignificant amount of dirty coal," said Amanda Starbuck of Rainforest Action Network. "When it comes to protecting America's mountains and clean drinking water, we don't grade on a curve. When banks stop funding mountaintop removal they will move to the head of the class."

RAN and Sierra Club disclosed the findings of this report card to each of the nine analyzed banks and offered them the opportunity to improve their grade with further information or changes to banking policies. In response to initial report card findings, Morgan Stanley released a public MTR policy that moved them from a failing grade to a C grade. JP Morgan Chase, despite a yearlong pressure campaign and their upcoming Annual General Shareholder meeting on May 18th, has yet to make changes to their MTR financing.

Credit Suisse topped the list, earning an "A-" for their efforts to promote responsible mining practices. Credit Suisse has confirmed that they do not finance the extraction of coal in a mountain top removal setting.

Rainforest Action Network and the Sierra Club are calling for the nine banks reviewed in this report card to strengthen their policies and cease their financial support for MTR. The ‘best practice' recommended in the report card is a clear exclusion policy on commercial lending and investment banking services for all coal companies who practice mountaintop removal coal extraction.

Mountaintop removal mining is a devastating form of mining where companies blow the tops off mountains to reach a thin seam of coal and then dump the waste rock into valleys below. This destructive practice has buried nearly 2,000 miles of streams and threatens to destroy 1.4 million acres of land by 2020. The mining destroys Appalachian communities, the health of coalfield residents and any hope for positive economic growth.